Braving the Electrical Storm in the ED

This post takes a deep dive into the pathophysiology, presentation and management of electrical storm in the emergency department. The management focuses on patients with implantable cardioverter-defibrillators receiving multiple shocks, patients with polymorphic ventricular tachycardia and refractory ventricular fibrillation.

Electrical storm (ES) has varying definitions in the literature depending on whether or not the patient has an ICD (an implantable cardioverter-defibrillator). In patients without an ICD, electrical storm is most commonly defined as the occurrence of 3 or more episodes of sustained ventricular tachycardia (VT) or ventricular fibrillation (VF) over a 24 hour period, where sustained VT refers to VT lasting greater than 30 seconds or requiring termination due to hemodynamic compromise in less than 30 seconds.

In patients with an ICD, the definition of electrical storm is widely accepted as 3 appropriate detections of ventricular arrhythmia that lead to ICD therapies (either anti-tachycardia pacing or shock) in 24 hours.  Of note this definition is not comprehensive as it does not account for VT that fails to terminate with appropriate ICD therapy and remains undetected by the patient, or VT slower than the programmed detection rate of the ICD.

The underlying pathophysiology of ES is poorly characterized but the working theory is that 3 key factors are at play: 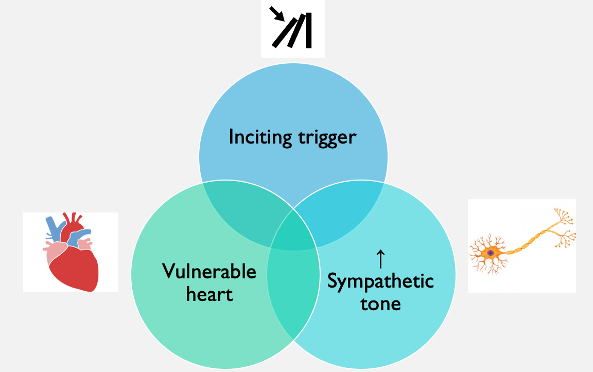 The relative distribution of arrhythmias encountered in ES is:

There is a wide range of clinical presentations of ES.  In the patient without an ICD, ES can include:

In the patient who has an ICD, they typically present complaining of multiple ICD discharges. However, ICD patients may have VT below detect may present similarly to the patient without an ICD.

What is VT below detect?

When a patient receives an ICD, it is programmed by the cardiologist or electrophysiologist to detect any rate greater than 175-180 beats per minute, and deliver a treatment (shock or anti-tachycardia pacing). This threshold is largely based on expert opinion. However, ICD patients may have VT at a rate less than this, for example at 160 beats per minute. The ICD doesn’t recognize this as VT and therefore will not shock the patient and terminate the VT

When we think about ICD shocks, they can be divided into:

It is important to identify if inappropriate ICD shocks are occurring, as this will influence management.  Moreover, while an appropriately functioning ICD will terminate life-threatening arrhythmias, it does not prevent them from recurring.

The causes of electrical storm can be classified into 2 categories:

It should be noted an inciting factor is not identified in up to 66% of cases. 3

Approach to the ICD patient with Recurrent Shocks

After you perform a full history and physical examination and initiate investigations to assess for reversible causes, you should proceed with hemodynamic assessment of the patient.

If the patient is hemodynamically stable, have a look at the monitor and determine which of the three scenarios you find yourself in.

In ALL cases, cardiology needs to be called for device interrogation. 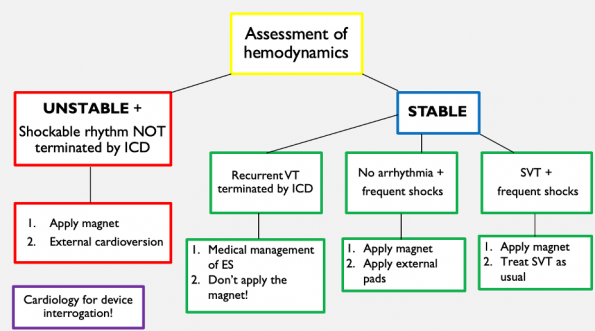 Management of monomorphic VT storm in the ICD patient

First line pharmacotherapy includes suppression of increased sympathetic tone encountered in ES. There is very little guidance from the literature as to which type of beta blocker to use.

The evidence for amiodarone in refractory VF and VT comes from 3 trails conducted in the mid 1990s by the IV Amiodarone Multicentre Trial Group.  They found that in patients who had hemodynamically destabilizing ventricular arrhythmias refractory to procainamide, bretylium and lidocaine, amiodarone resulted in significant reductions in recurrence of ventricular arrhythmias, particularly in the higher dosing ranges. 5-7

Amiodarone is considered the standard of care and antiarrhythmic choice for monomorphic VT storm for the ICD patient proposed in the literature and by expert opinion. 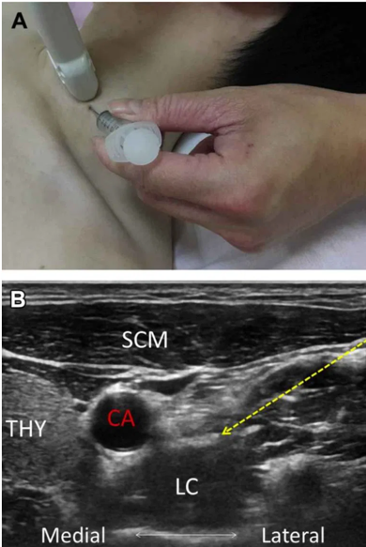 The procedure is commonly performed by anesthesiologists for complex regional pain syndrome and has also been reported to treat refractory angina, phantom limb pain, vascular insufficiency and hyperhidrosis. Several different approaches to the stellate ganglion block including the landmark approach, US guided and under fluoroscopy. 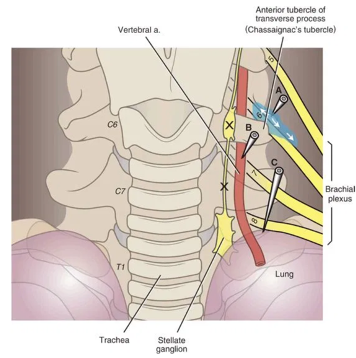 PMVT is ventricular tachycardia with varying QRS morphology from beat to beat. PMVT can be further subdivided into PMVT with long QTc (Torsades de pointes), which may either be acquired or congenital in nature, or normal QTc PMVT.

PMVT and a normal QTc at baseline, the underlying etiology in the vast majority of these cases is myocardial ischemia. Treatment includes:

Summary: Algorithm for the Management of Ventricular Tachycardia Electrical Storm 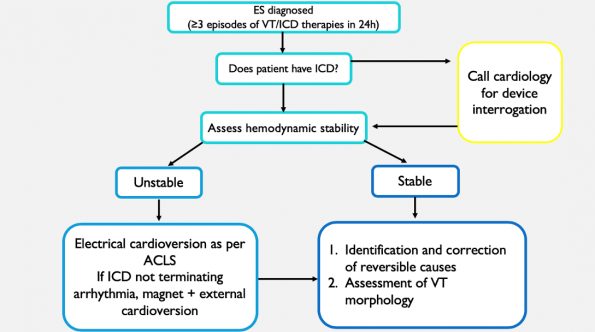 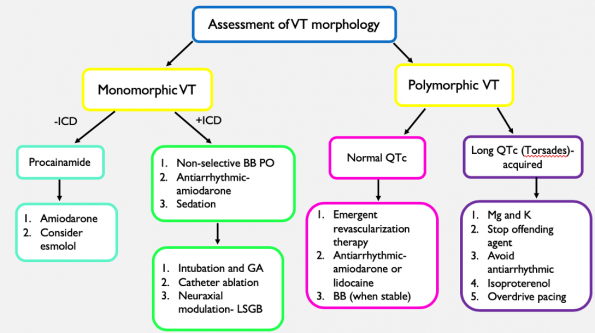 Shock refractory ventricular fibrillation (VF) is VF that is resistant to at least three defibrillation attempts, 300 mg of amiodarone, and 3 rounds of epinephrine with no return of spontaneous circulation (ROSC) after > 10 min of CPR. The management of shock refractory VF goes beyond ACLS guidelines and unfortunately, there is no established evidence-based standard of care for these patients.

Several strategies have been proposed that aim to convert shock refractory VF to a perfusing rhythm:

Driver et al (2014) published a single centre, retrospective study in the US comparing 6 patients who got esmolol after usual ACLS care to 19 controls who just got usual ACLS care.

Dosing of esmolol used in these initial studies was 500mcg/kg bolus followed by an infusion at a maximum rate of 50-100mcg/kg/min and this is what I would recommend for our patients. Remember that esmolol has a very short half life of only 9 minutes, so it should be given as a bolus followed by an infusion! Additionally, in cases of shock refractory VF, I would give a maximum of 3 rounds of epinephrine as epinephrine will exacerbate the increased sympathetic drive and perpetuate further VF.

Why is Dual Defibrillation Effective?

There are several theories as to why subsequent shocks are failing to terminate VF in shock refractory VF:

While this is only observational data and doesn’t take into account any patient-centered outcomes, the finding of improved VF termination to ROSC with fewer preceding standard shocks suggests that successful resuscitation with dual sequential defibrillation may be a time-dependent variable with greater success EARLIER on in the resuscitation.

Dr. Kathleen O'Connell is an Emergency Medicine resident in the Department of Emergency Medicine, University of Ottawa. She is an junior editor with the Digital Scholarship and Knowledge Dissemination team for the EMOttawaBlog.
2020-05-21
Previous Post: Authentic emergency department leadership during a pandemic
Next Post: Pulmonary Embolism in Pregnancy: Diagnostic Dilemmas