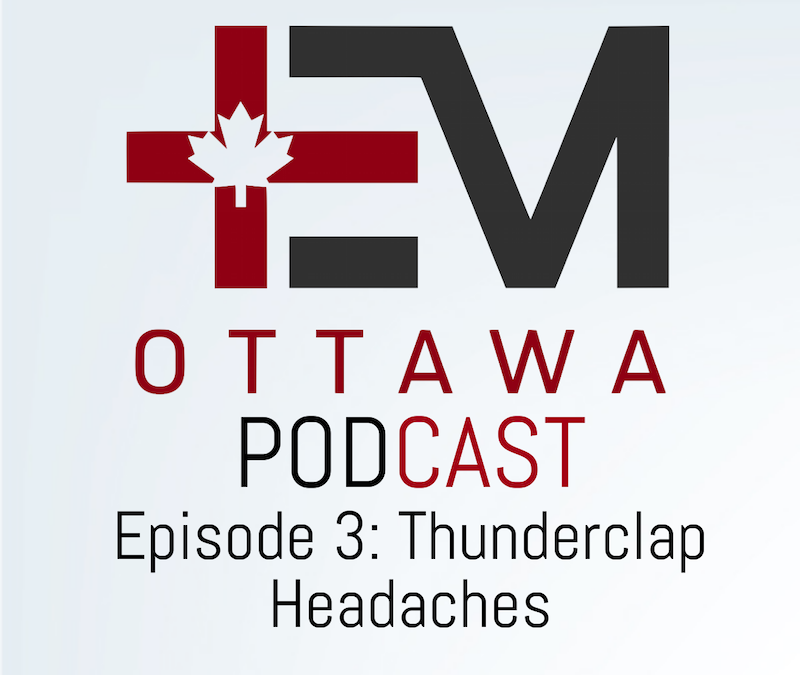 On episode three of the Ottawa EM Podcast, Dr. Rajiv Thavanathan (R5) interviews Dr. Michael Hale (R5), on the ED presentation and diagnosis of subarachnoid hemorrhage in the context of the thunderclap headache. (Click here to access Podcast Main menu)

Why does the diagnosis matter?

Note: each of these features alone are more likely to be caused by another diagnosis.

In fact, thunderclap headache, although common in SAH, isn’t overlying predictive of SAH. That is to say, most patients presenting with a describe thunderclap headache will not go on to be diagnosed with a SAH, speaking to the rarity of the diagnosis.

While a combination of the above symptoms increases your pre-test probability, the  combined likelihood still rarely exceeds 25%.

In 2011, the initial SAH rule-derivation study showed 100% sensitivity to diagnosis SAH if the scan was performed within 6-hours.

In 2020, Dr. Perry’s SAH Validation paper published in Stroke, they found a 95.5% sensitivity. And in-fact the true sensitivity may lie somewhere in-between these numbers, as from the most recent study, of the 5-missed SAH cases of 111 SAH diagnosis:

*Clinical Pearl: A hemoglobin < 100 g/L makes blood less hyperdense on CT-scan, and therefore much easier to miss. Therefore, clinicians should proceed with caution in applying this rule to the profoundly anemic patient.

For Dr. Michael Hale, if a patient presents to the ED under the 6-hour window, a NCCT will suffice unless the patient is:

CTA: Radiation (double the radiation-dose, albeit still less than that involved a CT Abdo-Pelvis), contrast-allergy, and the risk of detecting an incidental aneurysm (2-3% of the population, the vast majority of which would never cause any problems).

Does time matter for CTA sensitivity as it does for NCCT?

The factors that decrease the sensitivity of each are different:

Is there an added diagnostic yield to doing CTA over LP?

Dr. Michael Hale is a 4th year Emergency Medicine resident at the University of Ottawa who is completing a Masters in Business Administration.

Dr. James Gilbertson is a first year emergency medicine resident at the University of Ottawa. He is a Junior Editor with the Digital Scholarship and Knowledge Dissemination team for the EMOttawaBlog.

Dr. Thavanathan is an 4th year Emergency Medicine resident at the University of Ottawa, currently undertaking a fellowship in ultrasound.