Direct versus Video Laryngoscopy: Are they just as good?

Did we get your attention? Good! This is one of the areas in Acute and Critical Care Medicine which is highly controversial. This post is a desire to explore the topic after this very interesting article below came out. I hope to get some feedback but please keep it friendly!
So I’m going to admit it right off the bat, I use direct laryngoscopy (DL) as my preferred means of intubation. It doesn’t mean I don’t use or like video laryngoscopy (VL), simply that I am more comfortable with DL. So when I initially saw this paper: Randomized Trial of Video Laryngoscopy for Endotracheal Intubation of Critically Ill Adults by D. Janz et. al in Critical Care Medicine, I was excited.
Could it be that both methods are “just as good”? Would I finally not look like a Luddite using my old school DL technique with the residents wondering why I was holding on to a method dating back to the 19th century? Below is my breakdown of this paper and what I think it tells us about DL vs. VL.

To evaluate the effect of video laryngoscopy on the rate of endotracheal intubation on first laryngoscopy attempt among critically ill adults. 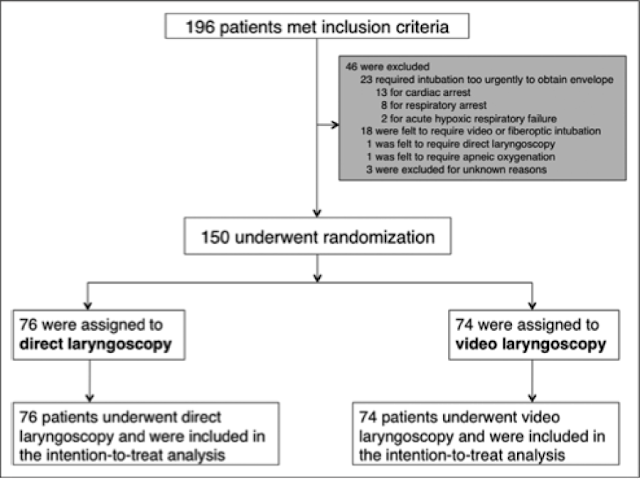 At a quick glance, this seems to be a study of all critically ill adults. However, this is not entirely true. Look at Figure 1 and their exclusions. 18 patients were felt to require VL or fiberoptic and therefore it is fair to assume they had some difficult airway features, which made VL the method of choice. Same with the 1 patient felt to need DL.
23 patients were excluded because intubation was “too urgent”. This is a key exclusion that pertains to the Emergency Department (ED) world. Many of our intubations are of the “very urgent” nature. Therefore, if you excluded the type of patients that I will see I cannot extrapolate their findings to emergency medicine (EM) intubations.

A randomized, parallel-group, pragmatic trial of video compared with direct laryngoscopy for 150 adults undergoing endotracheal intubation by Pulmonary and Critical Care Medicine fellows.
Only pulmonary or critical care fellows performed intubations. This is a very homogeneous group of intubators, which once again does not compare to the EM world, where we have everything from first year residents to veteran EM specialists.
Of course it was not possible to blind the clinical team and therefore this is not a blinded trial. However, if you are on “team DL” or “team VL” you may have the expectation of success/failure making that first attempt your “best”. This could have swayed the results in favour of one method over another.

There was no difference in the rate of intubation on first attempt between VL (68.9%) and DL (65.8%) (unadjusted odds ratio [OR] of intubation on first attempt with VL, 1.15; 95% CI, 0.58–2.28; p = 0.68).
Of the 22 DL patients who required a second laryngoscopy attempt, half were intubated with VL and half with DL as opposed to the 16 VL patients requiring a second attempt, 14 of whom were intubated with VL and only two with DL.
To me there is signal that VL was the preferred device when things were not going as planned. However, the authors derived their N using an improvement in first pass success of 23% based on a previous trial. So it is fair to say that this study did not show that VL is superior to DL. But as we know, the inability to show that one therapy is superior over another does not mean the two therapies are equivalent.

So what does it all mean?

In my opinion this is a well-done study with strong methodology that should be commended for tackling such a controversial topic. Those who are staunch supporters of VL should read the whole article and critically appraise it themselves. However, this study does little to change the current outlook of DL vs. VL. The conclusion that I can gather from this study is that VL is not superior to DL in critically ill patients requiring intubation where the airway was not required urgently and it was not an expected difficult airway.
I guess for now, I’ll still look like a Luddite to the residents! Would love to hear the what others have to say.
Guest Post by Dr. Hans Rosenberg