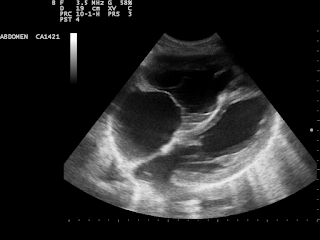 This prospective, per-protocol observational study is now the largest study on the point of care ultrasound in cardiac arrest (specifically PEA/asystole). It demonstrates that the presence of cardiac activity is the variable most associated with survival in cardiac arrest (more than bystander CPR, for example), with an OR of 3.6 for survival to admission, and 5.7 for survival to discharge. Ultrasound may also allow one to diagnose tamponade or right heart strain (due to massive PE) as potential causes of an arrest. Hence, it should likely be included as a part of any PEA/asystole resuscitation algorithm.

However, it should be noted that the strength of this study is limited by the potential selection bias that occurred with convenience sample enrolment, as well as the performance bias that resulted from it being unblinded (allowing clinicians to alter their care based on the ultrasound, and thus potentially affect outcomes). As well, it should be noted that the lack of cardiac activity cannot predict futility with absolute certainty, as 3 of the patients without cardiac activity (0.6%) still survived to discharge. Rather than acting as a hard decision point, the lack of cardiac activity (or presence) should be intergrated into the total clinical picture, albeit as likely the strongest prognostic factor.
By: Dr. Francis Bakewell

Performance Bias
Performance bias in this study refers to potential systematic differences in the care provided between groups other than the interventions of interest (point-of-care ultrasound). After enrolment, blinding (or masking) of physicians to the ultrasound results (specifically with regards to cardiac activity) might have reduced any bias introduced by the vigour of resuscitation which in itself affects outcomes. Hence, effective blinding would have ensured that the groups (with and without cardiac activity) received similar amount of attention and treatment.
By: Dr. Venkatesh Thiruganasambandamoorthy