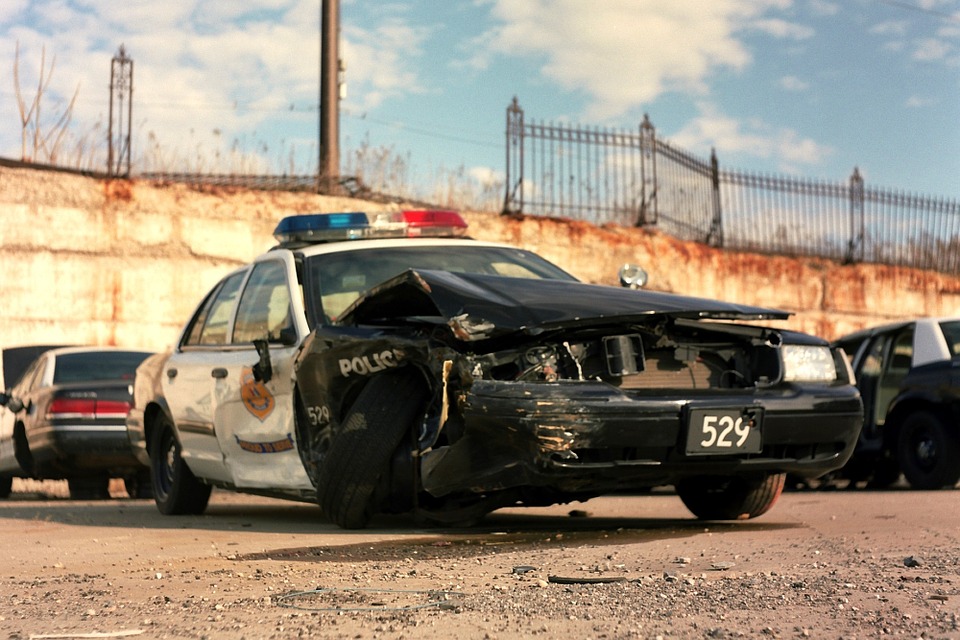 There were some notable papers published in trauma over the past 12 months or so. Here’s a look at three of them, which might help answer a few key questions in trauma management:

What Does This Paper Tell Us?

Outcomes:
10 EPs and trauma surgeons classified potential thoracic injuries as insignificant, minor, or major (using need for intervention, observation, or hospitalization as a guide). Note that many of the minor clinical injuries were still observed for >24 hrs: 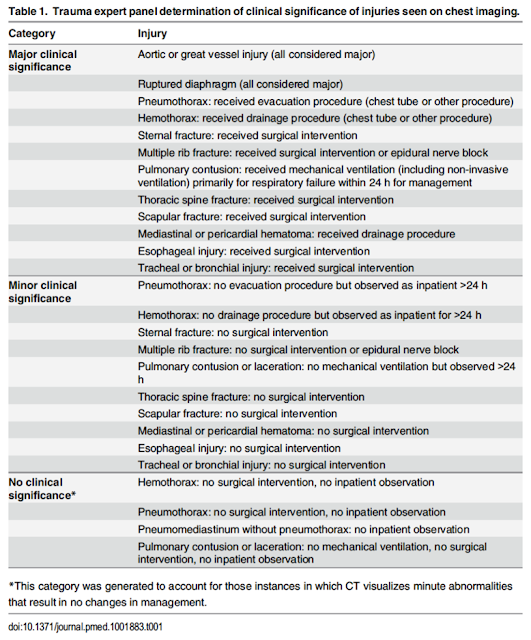 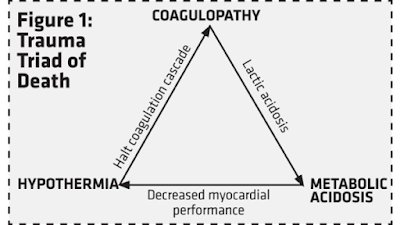 The PROMMTT study (2013) was a prospective observational study looking at 905 trauma patients admitted to hospital who required at least 3 units of blood products within 24 hrs (not the usual massive transfusion population that was looked at previously, in an effort to exclude the survivor bias that occurs when you require patients to receive at least 10 units)
What’s unknown?
Does a balanced transfusion strategy affect mortality when studied in a prospective, randomized fashion?

What does this paper tell us?
Methods
1:1:1 protocol:

1:1:2 protocol (composition and order changed from odd to even containers): 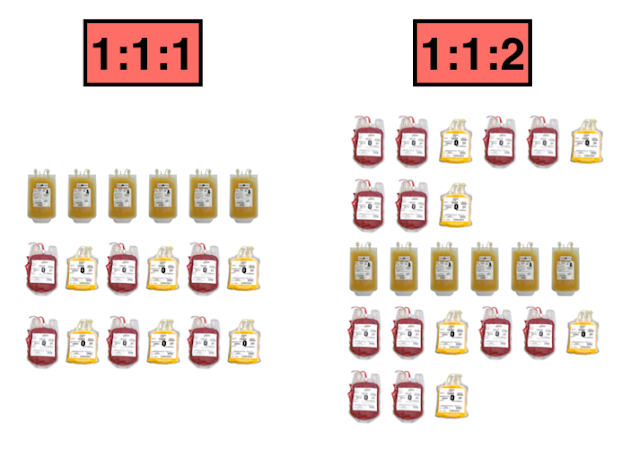 Primary outcomes:
Secondary outcomes:
Results
Sample size of 580 planned to detect a clinically meaningful 10% difference in 24hr mortality and 12% difference in 30-day mortality (based on prior data) — increased to 680 based on the final observed mortality proportions to reach 95% power
PRIMARY OUTCOME:
Sensitivity analysis done to exclude patients who were given blood products out of the pre-specified order yielded similar mortality results
More patients in the 1:1:1 group achieved hemostasis (86.1% vs. 78.1%) [This is an unblinded outcome]
Also note, the patients did NOT actually receive the pre-specified ratios, for the most part:
This occurred, according to the authors, because after the intervention period there was a catching up of products based on lab-directed care
There were no significant differences in complications at 30 days (ARDS, MODS, VTE, sepsis, and transfusion-related complications), though the overall rate of complications was high (89%))
Conclusions and Limitations
While this trial failed to detect a statistically significant mortality outcome when comparing the two transfusion protocols, it DID show a trend for both, and it DID show a statistically significant reduction in death by exsanguination, without an apparent increase in adverse effects
The authors suggest that if they had been permitted to move the endpoints much earlier (ie. mortality within 3-4 hrs) that they might have demonstrated a more robust mortality difference (as that is when most exsanguination deaths occurs)
As well, the authors were unable to exclude unsurvivable brain injuries, which made up a lot of the overall mortality (although we likely can’t reliably exclude this group when deciding on initiating massive transfusions either)
The trial was also underpowered (or overly ambitious) to detect mortality differences of less than 10% (given the observed difference of 4.2%, the study would have needed to enrol nearly 3000 patients to detect a significant result)
The authors conclude that a 1:1:1 protocol is reasonable while patients are actively bleeding or interventions are taking place, followed by lab-guided treatment once hemostasis has been achieved

There is probably a trend towards improved mortality with transfusion ratios more closely approximating whole blood, and the PROPPR investigators may simply have overestimated the effect size (ie. it is not more than 10%), or they may have unfortunately compared two strategies that are too similar to tease out really significant differences (remember, the retrospective military studies were comparing 1:1.4 and 1:8!)
Perhaps transfusion care will go the way of sepsis care in the future, with the realization that early administration of something similar to whole blood is the key, rather than a rigid ratio
Questions going forward:

Berger-PelletierE, Emond M, Lauzier F, et al. Hypertonic saline in severe traumatic braininjury: a systematic review and meta-analysis of randomized controlled trials.CJEM. 2016; 18(2): 112-120.
Why do we care?
The idea is that creating an osmotic gradient will keep more fluid intravascular, and that this will reduce cerebral edema, and therefore ICP
Mannitol is the classic osmotic agent used in sTBI, and may provide other beneficial effects as well (may be a systemic volume expander and improve overall BP, reduce blood viscosity and therefore improve cerebral blood flow, and act as a free radical scavenger)
Hypertonic saline (HTS) has long been proposed as an alternative osmotic agent, primarily due to its smaller volume and lower risk of inducing hypotension
It also has a proposed alternate mechanism besides a direct osmolar effect:
It’s important to note that HTS may also have adverse effects associated with it:
What’s known already?
Mannitol is traditionally the most widely used osmotic agent (83% of centres in the US, and 100% of neurosurgical centres in the UK)
A recent survey of EPs in Quebec, on the other hand, suggested that 53% use HTS instead
Studies on both mannitol and HTS are, in general, fairly poor
A Cochrane review of mannitol in acute TBI found only four RCT’s worth reviewing. Only one of them compared mannitol and hypertonic saline – in a trial of 20 ICU patients.
While the HTS group had fewer episodes of raised ICP, shorter episodes, and required less CSF drainage, it is too small a group to make any claims regarding patient-centred morbidity or mortality
What’s unknown?

What is the cumulative evidence for using HTS in sTBI

What does this paper tell us?
Methods
Results

Four studies looked at mortality, but only one of them was in comparison with mannitol (the Vialet trial) – the others all compared single bolus HTS with either NS or RL. None of them showed a mortality benefit:

When assessing for control of ICP, there was no significant improvement with HTS as compared to any other solution (mannitol or NS/RL), setting:

Conclusions and Limitations
The authors conclude that there is no apparent clinical benefit with the use of HTS to other fluids in treating ICP in sTBI
They note that 6 previous systematic reviews have been done before theirs, and note that 5 of them suggested a trend to reduction in ICP existed when using HTS.
However, all those reviews included fewer overall studies, and many included either non-RCT evidence (retrospective and observational data), or other neurosurgical conditions besides sTBI (eg. tumour, stroke), thus increasing clinical heterogeneity
The authors also acknowledge the high risk of bias in the included studies and the limited number of studies overall

In this study, the largest review of HTS in sTBI to date, there is no observable mortality benefit or effect on intracranial pressure with the use of HTS when compared to other solutions
The evidence is limited primarily by a lack of standardization of doses of HTS, as well as a lack of focus on patient-centred outcomes (mortality and disability)
Questions that still need to be answered:
In practice:
Probably reasonable to use either agent, although the balance between evidence and practice guidelines likely still favours mannitol
A strategy that chooses according to adverse effects is likely the most reasonable strategy (ie. avoiding mannitol in patients with AKI or hypotension, avoiding HTS in patients prone to demyelinolysis or who are coagulopathic). 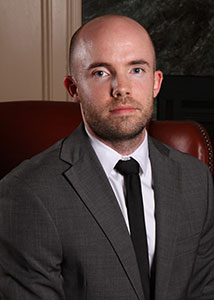