SIRS? No SIRS? Understanding Sepsis in the Emergency Department after Sepsis-3. 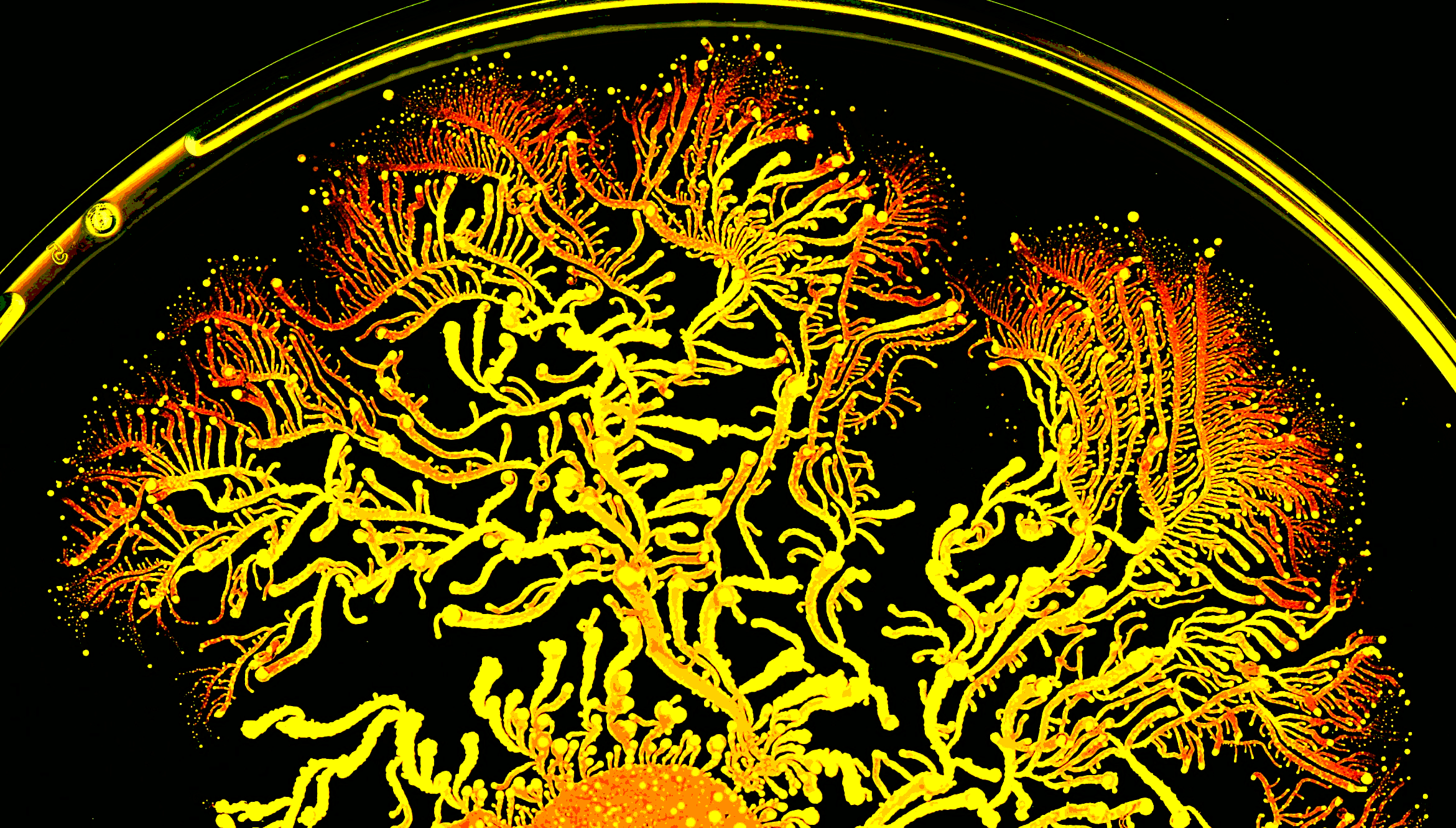 Use of the term “sepsis” continues to be controversial. We understand that patients with infection can manifest an immune-mediated systemic response, and are at risk of deterioration, organ dysfunction, and death. At what point in that cascade the patient is termed “septic” remains the centre of ongoing debate. In 2016, under the coordination of Drs. Mervyn Singer and Cliff Deutschman, a task force of experts in sepsis research were assembled to create The Third International Consensus Definitions and Clinical Criteria of Sepsis and Septic Shock (Sepsis-3) [1]. Prior to this, the most recent set of definitions were released in 2001 [2], and our understanding of sepsis has since changed. Thus, the definition of sepsis required an update. These definitions have been a source of major disagreement, but their major tenets must be known and understood by Emergency Department (ED) physicians, in order to apply them correctly.

Keep in mind that there is a difference between a screening tool and a risk-stratification tool. A screening tool aims to identify patients with a particular disease (ex: infection) from a larger pool of patients (ex: all patients in the ED). Once those patients with the disease are identified, a risk-stratification tool can be applied to individuals in this selected population in order to determine their likelihood of meeting a particular outcome (ex: death or ICU admission). This will become more important later on.

An important thing to realize about Sepsis-3 is that no Emergency Medicine physicians were a part of the assembled task force. However, ED physicians are intimately involved in the diagnosis, early management and risk-stratification of patients with presumed sepsis. The large majority of patients ultimately admitted to the ICU with sepsis or septic shock initially present to the ED, and most of these patients are identified (screened for) using the Systemic Inflammatory Response Syndrome (SIRS) criteria [3]. “Sepsis” had therefore been defined as presence of 2 or more of the SIRS criteria, coupled with suspected infection [4]. However, the SIRS criteria were criticized for being too non-specific, and were seen in many patients who did not have infection [5]. Further to this, Kaukonen and colleagues [6] demonstrated that 1/8 of patients admitted to the ICU with severe sepsis or septic shock did not meet the SIRS criteria, and that presence of the SIRS criteria was not associated with increased mortality. Thus, both the specificity and the sensitivity of the SIRS criteria in detecting sepsis were questioned.

“Sepsis is life-threatening organ dysfunction caused by a dysregulated host response to infection.”
This definition raises some important questions. How do you define “organ dysfunction”? What is a “dysregulated” host response? For that matter, what is a “regulated” host response? These questions are not answered in Sepsis-3.
After the task force had created their definition, they sought to create clinical criteria that could be used to diagnose a patient with sepsis. To do this, they chose to use the Sequential (Sepsis-related) Organ Failure Assessment (SOFA) score, which has been well-demonstrated to be associated with mortality in ICU patients with sepsis [7]. The SOFA score also grades severity of illness on the basis of organ dysfunction – one of the major tenets of the new definition.
Now, according to Sepsis-3, in order to diagnose a patient with sepsis, there must be suspected infection and an acute increase in the SOFA score by two or more points [1].

At The Bedside: qSOFA

Looking at the SOFA score, one can see that it is not the easiest score to apply in the ED setting. It involves variables not routinely measured in the ED (when was the last time you calculated a PaO2/FiO2 ratio in the ED?).

This was recognized by the Sepsis-3 task force. They used their large dataset of patients with suspected infection to retrospectively identify the major criteria, ascertainable at the bedside on initial assessment, that were most associated with death or prolonged ICU admission. This was termed the quick SOFA (qSOFA) score [8]. The qSOFA score consists of three criteria: Hypotension (SBP  ≤ 100mHg), altered mental status (GCS ≤ 13) and tachypnea (respiratory rate ≥ 22). Presence of 2 or more of these criteria was associated with significantly increased risk of death or ICU admission ≥ 72 hours.


An important thing to realize about the qSOFA score before you apply it is that qSOFA was designed as a risk-stratification tool, NOT a screening tool. That is, it was designed to maximize specificity, not sensitivity. So the presence of 2 or more of the criteria is an ominous sign. However, absence of the qSOFA criteria should not reassure you. Since SIRS was removed from the definition by the Sepsis-3 task force, there is a temptation to use qSOFA in its place. However, SIRS is a screening tool, while qSOFA is a risk-stratification tool. They are not interchangeable [5]. Further to that, according to the Sepsis-3 investigators, qSOFA does not replace the SOFA criteria in the diagnosis of sepsis either [1]. Finally, it is important to know that the qSOFA score has never been prospectively applied in the ED (but stay tuned…).

The Sickest of the Sick: Septic Shock

The last goal of the Sepsis-3 investigators was to identify patients at the highest risk of death, which they defined as “Septic Shock” [9]. In the 2001 definitions, septic shock was defined as sepsis (i.e. presence of the SIRS criteria and suspected infection) coupled with hypotension (systolic blood pressure ≤ 90 mmHg). With SIRS being discarded from their definition of sepsis, the Sepsis-3 task force had to create new criteria for defining septic shock. Based on their data sets, these investigators defined septic shock as initiation of vasopressors required to maintain a MAP ≥ 65mmHg AND serum lactate > 2.0 mmol/L, following “adequate fluid resuscitation”. The concept of “adequate fluid resuscitation” was not defined. These patients were at highest risk of mortality from infection. 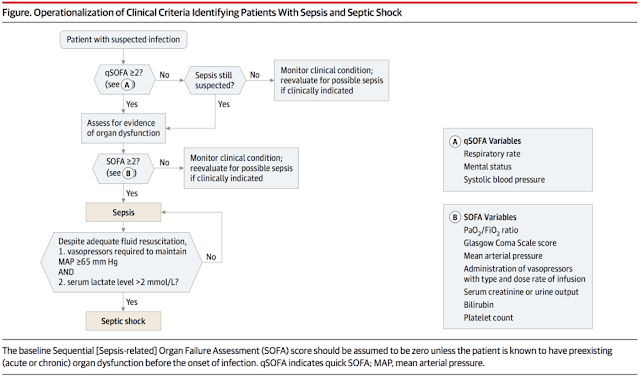 The inclusion of lactate in this definition was novel, but done on the basis of good evidence. In the ED, we know the initial lactate level has good prognostic utility in identifying patients at highest risk of in-hospital mortality [10]. Importantly, an initial lactate level ≥ 4.0 mmol/L is highly specific (although poorly sensitive) for in-hospital mortality in patients with suspected infection [10, 11]. Furthermore, lactate clearance has been demonstrated to have some association with resuscitation and improved outcomes [12-14].

A lot has been made of the Sepsis-3 definitions and clinical criteria [15-17]. Whether they represent a step forward in our understanding of this disease process is a matter of ongoing debate. Whether they will stand the test of prospective validation is simply a matter of time.
What can be said with confidence is that these new definitions do not reflect the practice of Emergency Medicine. “Sepsis” was previously defined as an inflammatory response (SIRS) in a patient with infection, but it has been changed to reflect a significantly greater degree of illness, namely organ dysfunction. Basing the diagnosis on the SOFA score makes it much harder for an ED physician to diagnose a patient with “sepsis”. Similarly, qSOFA may be a valuable tool for risk-stratification, but does not provide the ED physician with a screening tool for identifying low-risk patients suitable for discharge home.
Ultimately, this just may be an issue of semantics. As stated, we know that patients with infection are at risk of complex systemic response, organ failure and death. At what point the patient is labeled as “sepsis” is probably less important than identifying those patients at risk of deterioration. And given the role of the ED physician in initiating treatment and determining disposition, that may be where we should focus our energy. 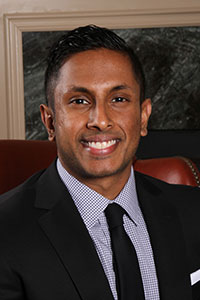 Dr. Shannon Fernando is a 3rd year Emergency Medicine resident at the University of Ottawa. He has a particular interest in critical care, resuscitation, airway management, and point-of-care ultrasound. His research focuses on the use of predictive modeling techniques to identify and risk-stratify Emergency Department patients with critical illness. He will be pursuing his fellowship training in Critical Care Medicine at the University of Ottawa in July 2017.
Edited By Dr. R Suttie, PGY2 Emergency Medicine