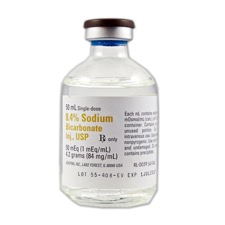 We’re familiar with sodium bicarbonate as a simple buffer solution, which has been utilized for a myriad of medical indications backed up by physiologic rationale and occasional moderate-quality evidence. It comes in two forms; vials (typically for infusions) and pre-filled syringes (pushed in cardiac arrest). There have been on-an-off shortages of these formulations over the past several years, sparking a renewed debate over bicarb’s utility in modern medicine (1). This post will highlight the rationale and evidence for sodium bicarbonate in cardiac arrest, severe metabolic acidosis, and rhabdomyolysis, as it pertains to our management in the ED.

There was a time when sodium bicarbonate was routinely administered in cardiac arrest, to counteract the severe metabolic acidosis associated with hypoperfusion and hypoxia. The 1974 Standards for Cardiopulmonary Resuscitation and Emergency Cardiac Care highlight that “the use of [sodium bicarbonate with epinephrine] during ventricular fibrillation improves the status of the myocardium and enhances the effectiveness of the defibrillation (2).” This recommendation persisted  for several decades, although we gradually became aware of its potential downsides – including electrolyte derangements, volume overload, and hypercapnia (3).

Over time, a growing body of observational evidence has linked the administration of sodium bicarbonate in cardiac arrest with poor outcomes; namely lower rates of ROSC and survival to hospital discharge (4,5). One large prehospital RCT noted no effect on rates of survival to the ED, except for a subgroup of patients with prolonged (>15 minutes) downtime (6). We do know of the downstream outcomes of this subgroup. Ahn et al conducted a small pilot RCT of ED patients with >10 minutes of downtime and proven intra-arrest acidosis; they found an expected, significant improvement in serum pH and HCO3, with a non-significant trend towards harm (less sustained ROSC) (7).

The most recent European Resuscitation Council and American Heart Association guidelines appropriately recommend against its routine use in cardiac arrest, except for tricyclic antidepressant overdose and hyperkalemia-associated cardiac arrest (8). While it has not been well studied for these specific indications, it is physiologically sensible. 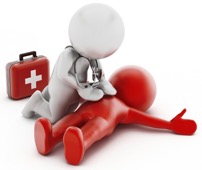 Who can we “buffer” with severe metabolic acidosis

The Henderson-Hasselbach equation (groan..) tells us that we can increase the pH of a medium (plasma) by increasing the ratio of conjugate base (bicarb) to its acid. With critically ill patients, we have long suspected that correcting acidemia will help our medications (e.g. vasopressors) work as intended and thus hasten recovery. The physiology is sensible, but does it pan out in real life?

A handful of small randomized crossover studies found no improvement in vasopressor responsiveness despite improvements in pH and HCO3 for acidotic patients with pH 7.15-7.35 (9,10). This informed the Surviving Sepsis Guidelines to recommend against sodium bicarbonate for patients with pH ≥7.15 (11).

More recently, Jaber et al conducted an RCT to answer this question for severely acidotic patients (pH<7.2). They assessed the effect of sodium bicarbonate boluses (titrated to physiologic pH) on a composite outcome of all-cause 28-day mortality and organ failure by day 7 (12). The authors found no effect for their primary outcome; however, in their pre-specified subgroup of patients with an AKIN score of 2 or 3, they noted a significant mortality benefit (ARR 17%). Although it has its limitations (to start, it wasn’t blinded), this benefit for patients with established kidney injury is impressive. The study dose of bicarb can be approximated by administering 500mL of isotonic sodium bicarbonate/D5W solution over 30 minutes.

Patients with severe diabetic ketoacidosis can be challenging to resuscitate. Guidelines have long-supported administering sodium bicarbonate for patients with pH <6.9-7, based on expert opinion. Recent systematic reviews and ED observational studies have found no clinical benefit and potential harms (pediatric cerebral edema and prolonged hospitalization), including for a small subgroup of patients with pH <6.9 (13,14). As a result, the American Diabetes Association no longer recommends sodium bicarbonate for DKA. Meanwhile the Canadian Diabetes Association still suggest that we consider it for pH<7. To me, it does not appear to offer a meaningful benefit.

What is the role of bicarb in rhabdomyolysis 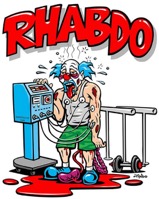 We know that myoglobin is released upon muscle breakdown in rhabdomyolysis, wreaking havoc in kidneys, where it is directly toxic and can lead to acute kidney injury via multiple mechanisms (15). This kidney injury is thought to be exacerbated by dehydration and acidosis; therefore, sodium bicarbonate may be administered in conjunction with mannitol to promote alkaline diuresis and thus avoid AKI. The risk of AKI itself appears to increase at CK levels > 5000 units/L (16).

Most early evidence supporting this practice is grounded in animal studies and case series’ of earthquake victims, where aggressive volume resuscitation and alkaline diuresis protocols have found anecdotal success (17).

This practice was first called into question by Brown et al, who observed no difference in AKI, need for dialysis, or mortality among traumatic rhabdomyolysis victims who were administered the combination of bicarbonate and mannitol (16). While this health records review may suggest a lack of utility for alkaline diuresis, they do not report on successful urinary alkalinization. Nor do any other observational studies, and bicarb specifically has not been studied in a controlled fashion versus saline alone (18).

In the face of minimal human evidence, and informed by physiologic rationale and expert opinion, the most informed systematic review suggests early and aggressive fluid resuscitation (18). Expert opinion also supports targeting a urine pH >6.5 with intermittent isotonic bicarbonate; however, the ED importance of this target is debatable. I will continue with normal saline rehydration and consider adding isotonic sodium bicarbonate if they have already received several litres of saline and they are still in my care, acknowledging the evidence here is very poor.

Our supply of sodium bicarbonate is limited, as are the patients who truly benefit from it. Save it for when we know it works – salicylate, methotrexate, or sodium-channel blocker toxicity – and consider it for the indications highlighted above.