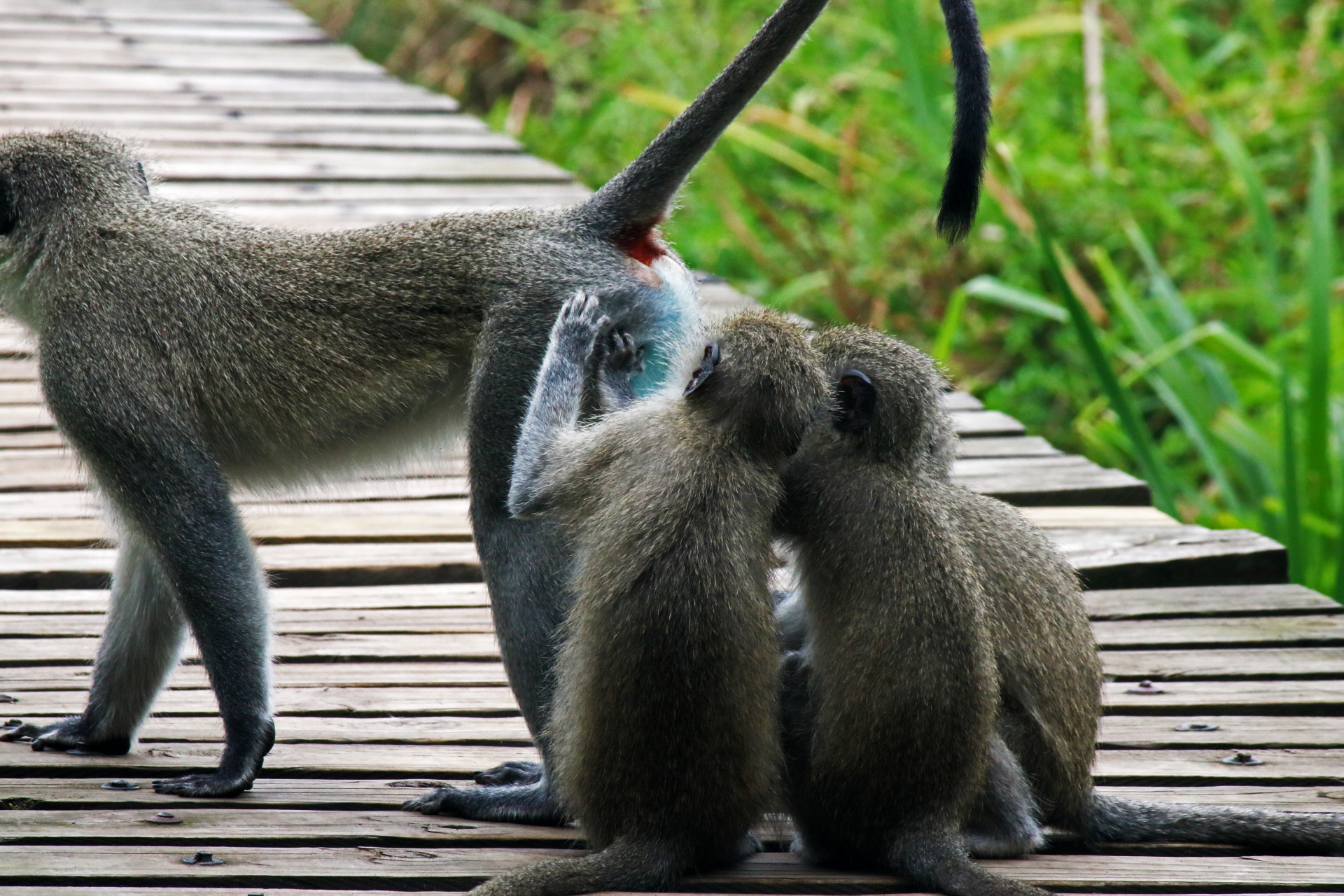 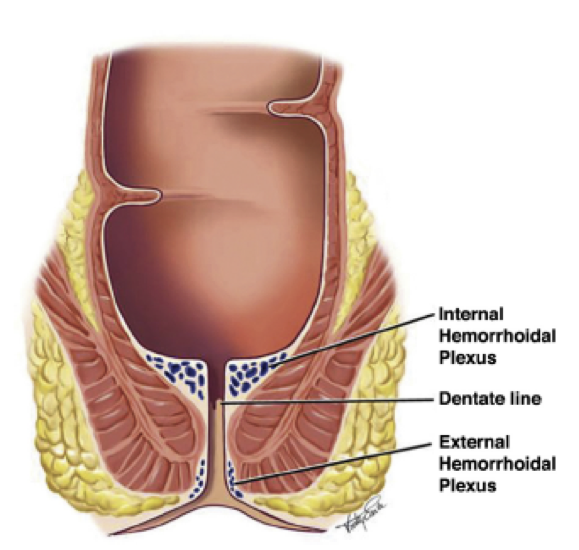 From Sandler RS, Peery AF. Rethinking what we know about hemorrhoids. Clinical gastroenterology and hepatology, 2019.

Hemorrhoids can be divided into 2 categories, based on whether the prolapsing culprit is proximal or distal to the dentate line. 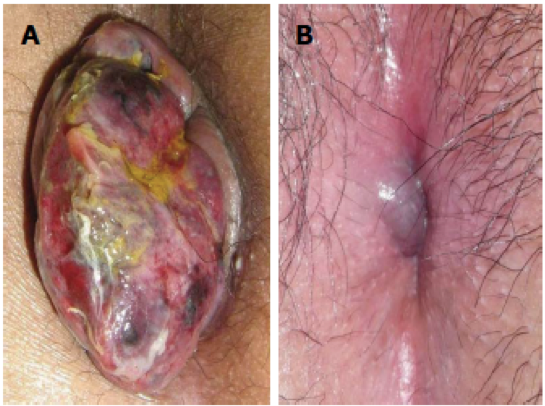 The American Society of Colon and Rectal Surgeons (ASCR) suggests warm water (“sitz”) immersion, oral analgesia, stool softener, and high fibre as first-line management of hemorrhoids.4 However, of these therapies, only fibre has any literature surrounding its use. A systematic review in 20065 identified 7 studies with a total of 378 patients looking at fibre for hemorrhoids: the most recent was performed in 1996 and overall there were concerns with blinding, concealment, and loss to follow-up. Overall, however, the meta-analysis showed fibre having statistically significant benefit for bleeding (RR=0.5) and overall improvement (RR=0.53) with a minimal side effect profile. Local practice at The Ottawa Hospital (TOH) is to recommend 25-30g of fibre a day.16

Of note, the ASCR does not recommend topical preparations for hemorrhoid therapy as there are no studies evincing benefit and these medications carry the risk of sensitization and contact dermatitis.4

Phlebotonics are a diverse family of plant-derived and semisynthetic compounds whose proposed method of action is to strengthen blood vessel walls, increase venous tone, improve lymphatic drainage, and normalize capillary permeability. Though not common in Canada, they can be used to treat varicose veins and symptomatic hemorrhoids. A Cochrane meta-analysis and systematic review of phlebotonics for hemorrhoids6 found 24 studies involving 2334 patients. Multiple formulations, variable quality, multiple endpoints, and multiple confounders mean that results should be interpreted with caution. However, there was a statistically significant benefit for the reduction of bleeding (OR=0.12), discharge (OR=0.12), and overall benefit (OR=15.98), with a beneficial trend for pain and pruritis. There was a minimal side effect profile involving gastrointestinal discomfort. The only phlebotonic approved for sale in Canada is MPFF (micronized purified flavonoid fraction) under the trade name VenixxaTM, which was used in 13 of the 24 studies included in the Cochrane review. It is sold over the counter. A single box costs approximately 32$ and contains a full course of treatment (1500mg BID for 4 days, then 1000mg BID for 3 days).7

Much of the literature around hemorrhoids focuses specifically on internal hemorrhoid management. Regarding external hemorrhoids, and specifically thrombosed external hemorrhoids, there is significant practice variation around incision and expression of clot. A single systematic review without meta-analysis8 identified only two papers comparing surgical and supportive therapy for thrombosed external hemorrhoid: while surgical outcomes were promising (significant difference in resolution of symptoms after four days), the procedures performed were overwhelmingly excision of clot and hemorrhoid, as opposed to incision. Given the real risk of bleeding, wound infection, prolonged pain, and poor wound healing, incision and expression of clot is not recommended in the ED, and surgical consultation should be considered if immediate pain relief is desired.16 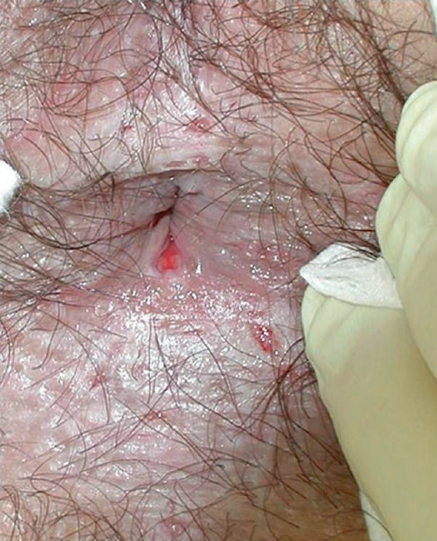 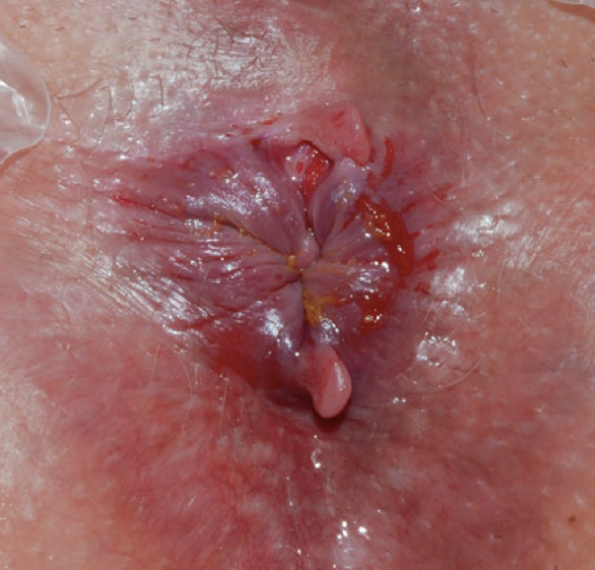 Sitz baths were found in a single 2006 study to have no significant difference in healing rates as compared to placebo, though patients expressed greater satisfaction with the former.14 15 minutes in lukewarm water QID PRN is a common approach, especially after each bowel movement.

The two ED-available smooth muscle relaxing agents included in the Cochrane review were nitroglycerin and calcium channel blockers.13 Nitroglycerin was found to have a statistically significant benefit for healing with a modest ARR (13.4%) but a 30% increase in headache as compared to placebo (NNT of 7.5, NNH of 3.3, which is less than ideal). CCBs were found to have no statistically significant difference in nonhealing rates as compared to nitroglycerin, but with a much better side effect profile in general, and for headaches in particular.

Neither nitroglycerin nor CCBs seemed to exhibit a dose-dependent response.13 Nifedipine 0.3% ointment (with or without lidocaine) is therefore the smooth muscle relaxer of choice, to be applied TID and after defecation. In Canada, this preparation must be compounded as it is not available commercially. Some experts recommend combining it with a petroleum base to increase comfort.