The Status on Status: Management of Status Epilepticus 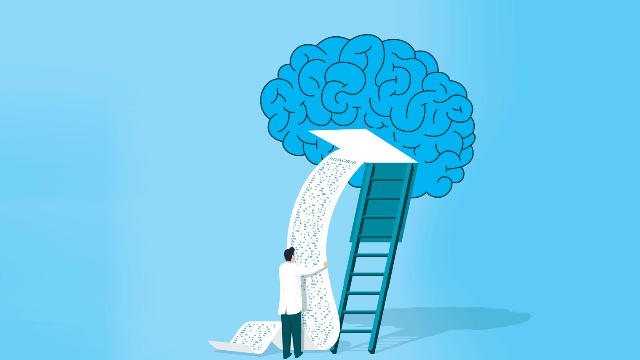 Status epilepticus (SE) is considered one of the most common neurological emergencies with an estimated incidence of 20 cases/100,000 people worldwide. 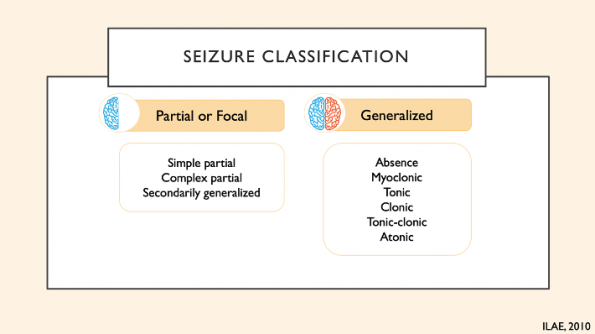 Prior to 2017, types of seizure were divided into 2 major categories:

Focal onset seizures were subdivided into:

Where awareness was defined as knowledge and understanding or surrounding events and nay not necessarily by synonymous with consciousness, although at times used interchangeably. 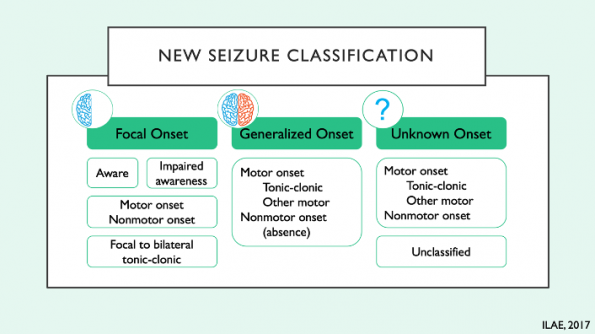 In 2017, the international league against epilepsy (ILAE) published the most recent seizure classification.

The duration of 5 minutes was chosen arbitrarily, selected primarily based on animal studies that showed prolonged seizures led to irreversible neuronal damage and therefore urgency is required in status epilepticus treatment.

Now, it’s all about time

In 2015, the definition of status epilepticus (SE) was modified. The ILAE introduced the idea of times T1 and T2 to the definition

According to this method of defining status epilepticus, the new definitions add the following:

GCSE has the poorest outcomes while focal and absence SE are not as life threatening.

Defined as SE that is refractory to 1st, 2nd and 3rd line agents for 24 hours.

The most recent evidence-based guidelines were published by the Neurocritical Care Society in 2012 and by the American Epilepsy Society (AES) in 2016.

In brief, as adapted from the AES guideline, there are 4 phases: 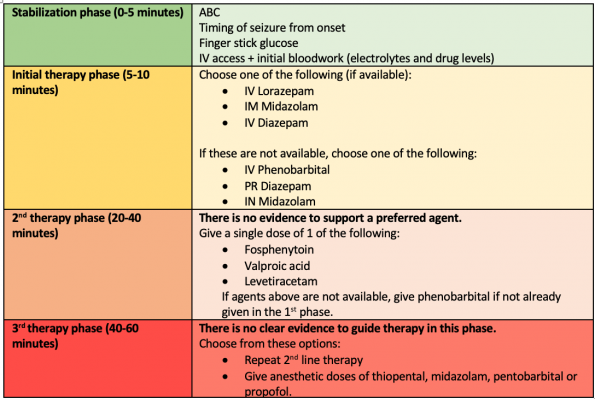 An important disclaimer from the AES guidelines

“Depending on the etiology or severity of the seizures, patients may go through the phases faster or even skip the second phase and move rapidly to the third phase, especially in sick or ICU patients”.

There is evidence to suggest that this statement is more often true than not which explains why there is great variation in how physicians manage SE.

A randomized trial by Alldredge et al (2001), provided evidence to support that giving benzodiazepines is important. Results showed termination of 60% of seizures with the administration of lorazepam or diazepam compared to giving placebo alone.

The longer patients are left to seize, the more refractory seizures become – therefore harder to treat. In was found in multiple studies that GABA receptors were quickly internalized after an initial massive surge of GABA at the start of the seizure. This can occur as quickly as < 5 minutes of seizure duration. For this reason, many of the available antiepileptic drugs become less effective with time. 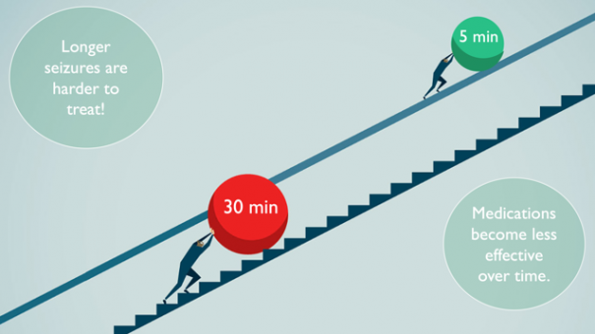 A multicenter observation prospective study of 218 patients (Gainza-Lein 2018) demonstrated that delayed benzodiazepine administration by > 10 minutes from seizure onset was associated with more deaths (66 vs 34%, with an adjusted odds ratio of 11), a higher need for continuous infusion of IV anesthetics and a longer convulsion duration (49 minutes longer in the delayed group)4.

This study was limited by the biases of an observational study design. However, it was the first study to identify an association between delayed benzodiazepine administration and poor outcomes including death. This paper may change our view SE as an extremely time-sensitive emergency similar to strokes and cardiovascular events.

Which benzodiazepine is preferred?

The RAMPART trial (2012), a randomized, noninferiority trial of 893 children and adults demonstrated that IM midazolam is not inferior to IV lorazepam. In cases where an IV line cannot be easily established, IM midazolam is the medication of choice. When access is available, IV lorazepam is preferred instead. Midazolam was easier and faster to administer (1.2 mins vs 4.8 mins to give lorazepam), which translated to a shorter time to seizure termination. However, if an IV was present, giving IV lorazepam led to earlier seizure termination (1.6 vs 3.3 mins). Adverse event rates, including endotracheal intubation, hospitalization, recurrent seizures, and hypotension were not statistically different between groups5.

Benzodiazepines tend to be dosed below guideline recommendations.

The emerging role of Levetiracetam

ConSEPT and EcLiPSE were two large RCTs designed to prove that levetiracetam is better than phenytoin.

A large multicenter RCT called the ESETT trial further confirmed that second line antiepileptics are not different in their efficacy and safety9.

Okay great, which second-line agent should be used?

The decision should be individualized and patient-specific. A few drug complications can be factored in to help avoid using them in a way that will worsen the patient’s condition.

Early intubation and sedation is an attractive option to terminate seizures in a timely manner. Unfortunately, the evidence is still sparse. The literature on using IV anesthetic agents to treat seizure stems from observational studies looking at managing refractory status in the ICU. Current guidelines recommend using either propofol, midazolam or phenobarbital, often causing a therapeutic coma in order to take control of persistent seizures evidenced on EEG14,15.

Many physicians will reach for propofol as the agent of choice because of its ultra-fast onset and high lipid solubility. However, propofol needs to be used with caution due to its propensity to cause hypotension and respiratory depression in addition to propofol infusion syndrome. For this reason, guidelines advise that midazolam can be an alternative. Midazolam may cause less hypotension because it is not diluted in propylene glycol and a lower dose of 0.2 mg/kg IV is often given to avoid causing significant hypotension15.

Phenobarbital is rarely used due to possible serious adverse effects but some evidence does suggest barbiturates are associated with lower frequency of treatment failure and seizure recurrence14. 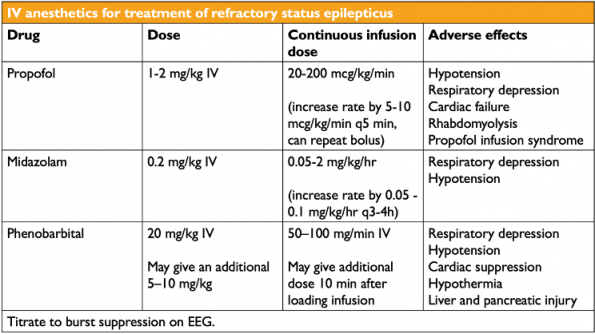 Propofol and midazolam work as strong GABA agonists but, as seizures become increasingly more refractory, the number of GABA receptors will decrease while NMDA receptors will increase. Thus, adding a strong NMDA antagonist like ketamine should theoretically help.

Similar to other IV anesthetics, there is limited data looking at ketamine for the treatment of SE. Several case reports and case series demonstrated the efficacy for ketamine at 57% overall when administered as an add-on agent to other conventional IV anesthetics, which themselves have an efficacy anywhere between 42-66%14,16. This medication has a relatively favourable side effect profile. Specifically, it is not associated with cardiac depression and hypotension like other IV anesthetics. The recommended dose is 1-2 mg/kg bolus followed by 1-10 mg/kg/hour infusion16.

So far, it appears the best predictor of efficacy for ketamine is the time of administration. The systematic review by Rosati et al (2018) found that ketamine was 2 times more effective if given early (on day 3 vs day 27) for refractory and super-refractory SE17. In another study, a retrospective review of 60 refractory status episodes, response rate was highest at 60% when ketamine was given as a 3rd or 4th line agent in combination with other IV anesthetics. Given later than that, ketamine became increasingly less effective14.

Instead of a stepwise, watch-and-wait approach, perhaps multiple management steps should happen in parallel. The proposed algorithm here is simpler, one that prioritizes early seizure termination. In the first 5 minutes, the focus should be on the ABCs and testing for reversible causes. The first dose of benzodiazepine should be given within this time frame. If the patient is still seizing, a second dose of benzodiazepine and a second-line antiepileptic drug should be available to be given immediately between 5 and 10 minutes. At the same time, the patient should be prepared for intubation. At 10 to 20 minutes, if the seizure persists, the patient needs to be rapidly intubated using IV anesthetic for airway protection and seizure control. 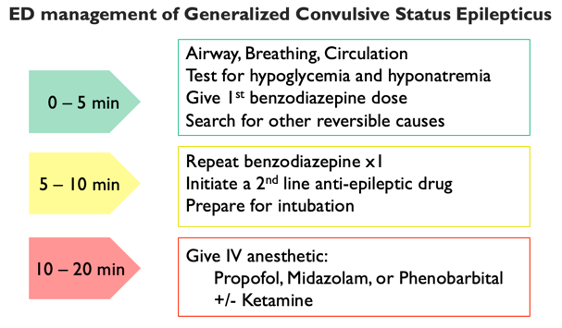