Back to Black: A Review of Activated Charcoal 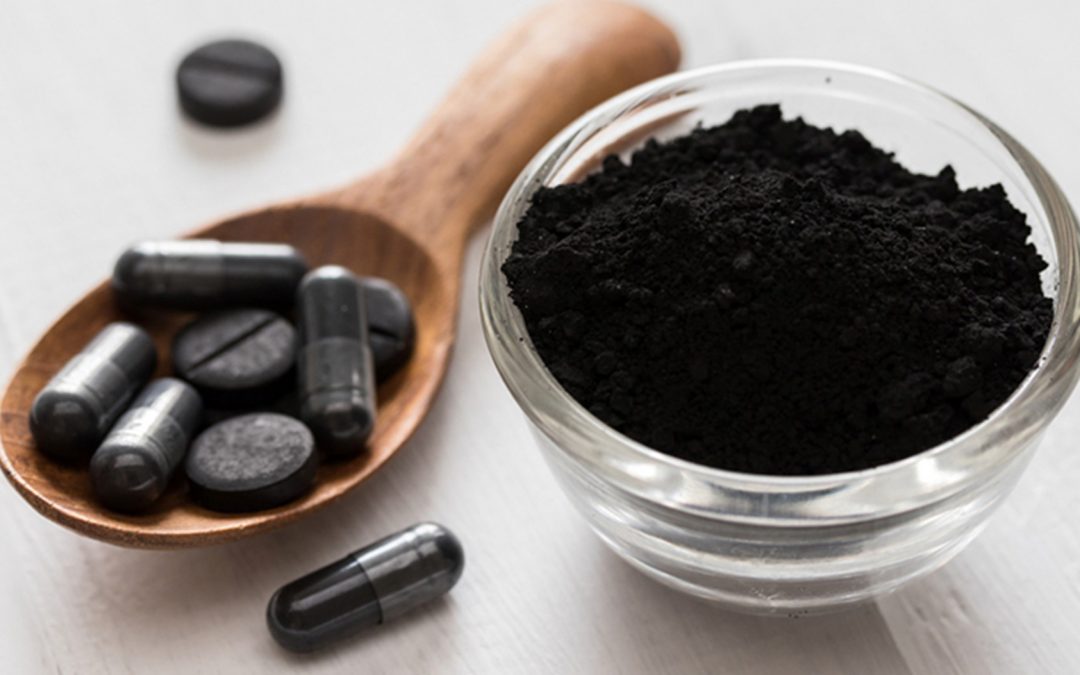 In this blog post, Dr. Alexandra Hamelin weighs in on many of the controversies surrounding activated charcoal (AC), and provides a practical approach for its use in overdose patients in the emergency department. Specifically:

Activated charcoal (AC) has been recognized for almost 2 centuries as an effective adsorbent for many substances. It’s made by the controlled pyrolysis of carbon-based compounds, like peat, coconut shells, and bamboo, followed by activation at very high temperatures with various oxidizing agents. This creates a huge maze of internal pores with a surface area ranging from 800-1200 m2/g, capable of adsorbing a wide variety of drugs and toxins.

But for such a universal method of decontamination, there still remains some controversies and misconceptions amongst emergency physicians and other healthcare providers. The current debate regarding the role of AC in poison management relies on reconciling the evidence in controlled volunteer trials and heterogenous overdose patients, combined with clinical experience and expert advice.

QUESTION 1. WHAT IS THE APPROPRIATE DOSAGE OF ACTIVATED CHARCOAL?

When you think about administering AC, how much are you giving? While many physicians use a 1g/kg dosing regimen, the dose should actually be an AC-to-drug ratio of 10:1. Essentially, for every 1 mg of drug ingested, 10mg of AC is administered.

The best scientific basis for the 10:1 AC-to-drug ratio comes from in-vitro studies and in-vivo studies using para-amino-salicylate (PAS). In vitro, the fraction of unadsorbed PAS decreases from 55% to 3% as the AC-to-drug ratio increases from 1:1 to 10:1, with this ratio being similarly effective in human volunteer studies (1, 2).

This 10:1 strategy works especially well for smaller ingestions. For example, think about a small child with an accidental ingestion of 40mg of Bisoprolol. If we calculate the AC dosing, that’s 400mg of AC. And as each bottle of AC is 50g, that’s really only a couple sips that’s able to effectively bind all that drug.

In overdose scenarios where the amount of drug ingested is known, a 10:1 dosing of AC should be used. This is especially useful if the calculated 10:1 dosing is less than the 1 g/kg dosing, as a smaller amount is more tolerable for patients and can decrease the risk of aspiration. However, often times we don’t know actually know the amount that a patient ingested. In these cases, a 1 g/kg dose is also appropriate.

QUESTION 2. THE INGESTION HAS BEEN OVER AN HOUR. CAN ACTIVATED CHARCOAL STILL BE USEFUL FOR DECONTAMINATION?

It’s not surprising that delays in administration makes AC less effective. This has been demonstrated in this summary of volunteer trials showing the percent reductions in the area under the curve at various lag times of AC administration (3). 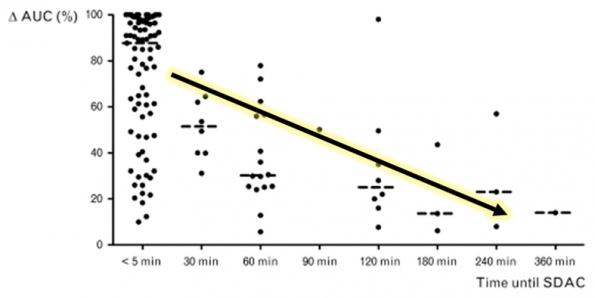 But it’s important to remember that these types of volunteer studies have limitations, which make it hard to extrapolate to overdose settings. These are medically well subjects using subtoxic drug doses. In the overdose setting, normal pharmacokinetics and pharmacodynamics go out the window. First pass metabolism becomes saturated, acid-base disturbances develop, and receptors become saturated, which may make more free drug available for binding and adsorption.

Additionally, AC can have a delayed effect on certain medications, including sustained release preparations, in medications prone to forming concretions, and in patients with decreased gut motility, such as co-ingestions with opioids or anti-cholinergics. In these cases, clinical toxicity can be both delayed and sustained, and more amenable to AC hours after ingestion when significant toxicity is anticipated.

Examples showing the benefit of delayed AC is demonstrated in various volunteer studies using subtoxic drug doses. When AC was administered 4 hours post-ingestion, there was a significant reduction in salicylate levels by 57% and sustained released Verapamil levels by 35% (4,5). Furthermore, a meta-analysis of 64 volunteer studies was performed to estimate the effect of AC administered during the first 6 hours after drug ingestion. The percent reductions in drug exposure that were statistically significant were at all times from 0 minutes to 4 hours, ranging from 88% to 27% (6).

You need to carefully consider the risks and benefits of AC as a decontamination strategy for each individual patient in front of you. I would consider administering AC up to 2-4 hours post-ingestion if the benefits outweigh the risks. Later administration can be considered beyond 4 hours after considering other factors:

QUESTION 3. WHEN SHOULD MULTI-DOSE ACTIVATE CHARCOAL BE CONSIDERED?

While a single dose of AC is a means of GI decontamination, multi-dose activated charcoal (MDAC) is more akin to dialysis.

Let me explain how this works. Administering AC creates a concentration gradient between the gastrointestinal tract and the bloodstream, which results in passive diffusion of drug back into the gastrointestinal tract using the gut as a semi-permeable membrane. It also works to interrupt enterohepatic circulation, where drugs are excreted from the liver, into the bile, into the small intestine, where it’s then absorbed by enterocytes and transported back to the liver.

So MDAC here works long after ingestion, by interruption of enterohepatic and enterovascular cycling of the drug. 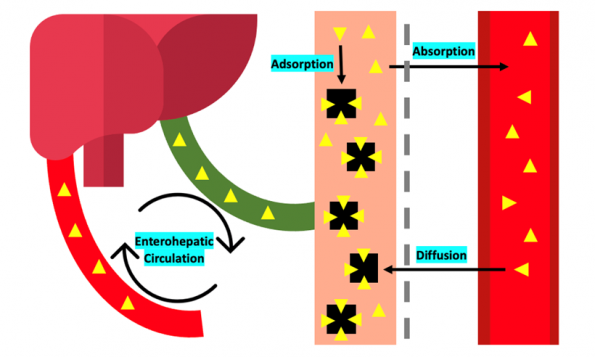 This concept of gut dialysis is demonstrated nicely in animal and volunteer studies. In one study, using an isolated perfused rat small intestine, MDAC dramatically affected the pharmacokinetics of IV theophylline administration by producing a constant intestinal clearance that was near equivalent to blood flow (7). Similarly, in human volunteers, administration of IV theophylline followed by MDAC reduced the serum half life of theophylline from 6.4 hours to 3.3 hours (8). In one prospective, randomized clinical study, 10 phenobarbital overdose patients were randomized to receive either single dose or multi dose AC. Those who received MDAC had a reduction in phenobarbital half-life to 36 hours compared to 93 hours in those with single dose AC (9).

Based on experimental and clinical studies, MDAC should be considered if a patient has ingested a life-threatening amount of a drug known to undergo enterohepatic circulation:

QUESTION 4. DOES ACTIVATED CHARCOAL HAVE A ROLE IN ACETAMINOPHEN OVERDOSE WITH NAC BEING SUCH AN EFFECTIVE ANTIDOTE?

What volunteer studies tell us is that AC is effective in reducing the absorption of acetaminophen up to 2 hours post-ingestion by up to 22% (10, 11). But what about patient-centered outcomes? 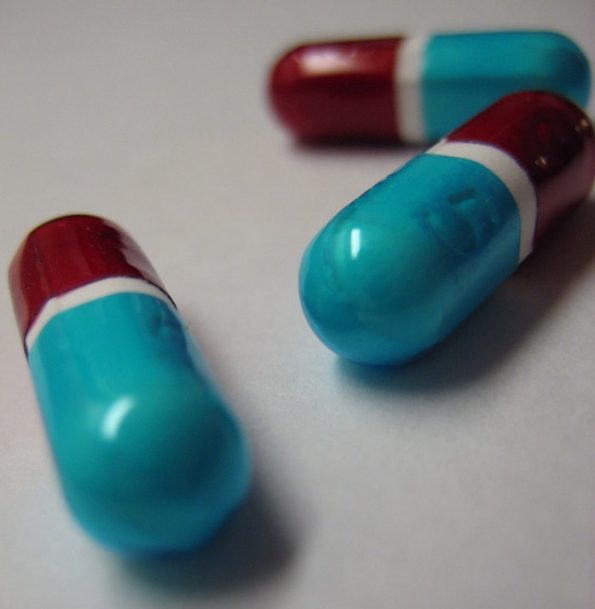 Various other studies, largely retrospective in nature, have examined the effect of AC in acetaminophen overdose, which have demonstrated the following benefits:

But an important point I’d like to stress is that AC may be particularly beneficial in massive acetaminophen overdoses (500-1000 mg/kg ingestions). A common rationale for not giving AC in these situations is that in massive overdoses, AC is unlikely to decrease the ultimate need for NAC, with an underlying assumption that early NAC therapy will be universally effective.

But the data from the ATOM-2 study directly challenges the validity of this viewpoint. In this study, they examined massive acetaminophen ingestions, defined as > 40g, using a prospective observational study through Poisons Information Centres and retrospective studies from 3 clinical toxicology unit databases over 20 years. They found that several patients treated with NAC within hours of a massive overdose still went on to severe liver injury, even to require a liver transplant, but this did not occur in any patients receiving early AC (15).

Despite this evidence, the culture in medicine and toxicology still remains that most tend not to give AC in acetaminophen overdose. It can be considered up to 2 hours after overdose in an attempt to reduce the treatment threshold for NAC and to reduce a patients hospital length of stay. However, it should be more strongly considered in polypharmacy ingestions, and especially in massive acetaminophen ingestions, as we now know that in some instances, NAC is just not enough to prevent serious sequelae.

While theoretically one might think that the use of the two decontamination strategies would be more effective, a lot of the concern surrounding this combination is the thought that PEG might reduce the adsorptive capacities of AC.

Indeed, this phenomenon has been shown to be true in in-vitro studies, where the addition of PEG solution to AC reduces its efficacy in adsorbing fluoxetine, theophylline, cocaine, and salicylic acid (16, 17, 18, 19).

This is further demonstrated in human volunteer studies. In one such study, volunteers ingested carbamazepine, theophylline, sustained release verapamil and salicylate, then were randomized to receive either AC alone, AC followed by whole bowel irrigation (WBI), or water. The addition of WBI to AC did not increase the efficacy of AC on any of the absorption parameters of the drugs studied, and on the contrary, WBI significantly decreased the efficacy of AC with respect to carbamazepine levels (20).

The data supporting the use of AC and WBI as a combined decontamination strategy is lacking. However, this combined approach is still often employed in dangerous overdoses of sustained-release medications (think massive Bupropion overdoses!), that have the potential to cause serious toxicity. While this approach is not evidence based and largely based on expert opinion, I recommend giving a first dose of AC after the airway is secured. This gives AC time to interact with the drug in the absence of PEG solution. During this time, I would set up for WBI. After WBI is complete, I would then administer a second dose of AC after another 1-2 hours.