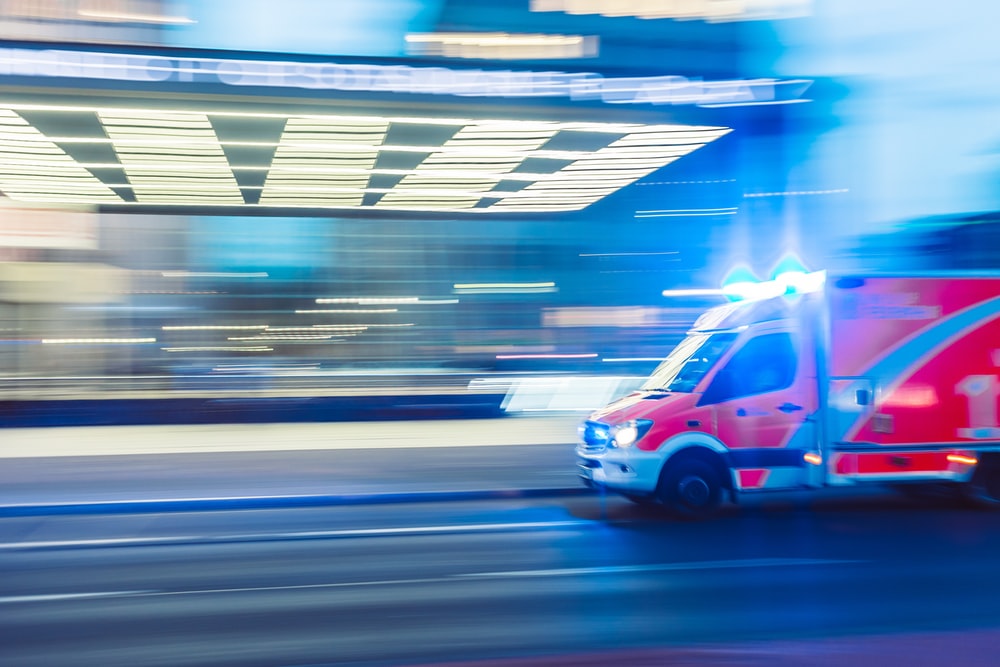 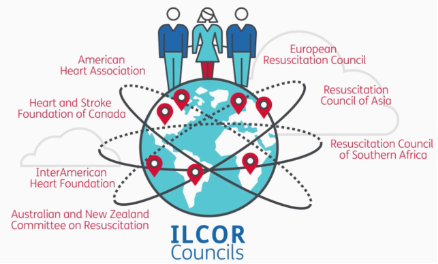 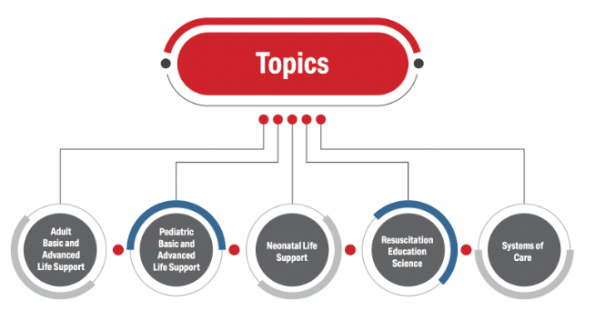 This post will focus on some of the more controversial guidelines in the new adult ACLS guidelines, published by ILCOR in 2020.

We will aim to provide insight into some of the current and emerging literature on the above topics, to help contextualize the recommendations and practice moving forward.

2020 AHA guidelines: “The usefulness of double sequential defibrillation (DSD) for refractory shockable rhythm has NOT been established” (Class 2b)12

2020 ILCOR guidelines: “We suggest AGAINST routine use of dual sequential defibrillation (DSD) strategy in comparison with a standard defibrillation strategy for cardiac arrest with a shockable rhythm.” (weak recommendation, very low-certainty evidence)7

Results: When comparing standard and dual sequential defibrillation, they found that overall they were EQUALLY successful in TERMINATING shock refractory VF by either obtaining ROSC (21.4% vs. 17.6%; RR 0.8; 95% CI: 0.4-1.6) or converting to PEA or asystole (78.1% vs 76.5%; RR 1.0; 95% CI 0.8-1.2). In earlier defibrillation attempts (shock attempts 4-8), DSD was much more successful in obtaining ROSC when compared to the standard defibrillation group (15.7% vs 5.4%; RR 2.9, 95% CI 1.4-5.9). With increasing defibrillation attempts, this benefit was lost and standard defibrillation was just as effective as DSD. Although this was purely observational and did not assess patient centred outcomes such as neurologic recovery, they did identify that DSD is likely most beneficial when performed early in the resuscitation.

Recently, a new RCT named the DOSE-VF trial (Cheskes et al. 2020) was started3. Although this study is currently in progress, they published the results from the pilot of this RCT in 2020. The goal for this pilot was to assess the feasibility and safety of the study protocol. It is a pre-hospital, multi-center cluster RCT comparing standard defibrillation (SD), dual sequential external defibrillation (DSD) and vector change external defibrillation (VC) in patients with OCHA presenting in shock refractory VF. The primary outcome measure of this study will be survival to discharge. Even though this pilot was meant to look at the feasibility of the trial, it provided a glimpse into some of the preliminary data surrounding the various treatment arms.

Overall, we can appreciate a trend that VC and DSD have higher rates of obtaining ROSC when compared to standard defibrillation. DSD and VC were able to obtain ROSC in 40.0% and 39.3% of patients in contrast to standard defibrillation (which had a rate of 25.0%). Note, that this preliminary data should be interpreted with caution as it was a pilot study – therefore, it is not powered to look at patient centre outcomes.

Dual sequential defibrillation is likely safe. Based on the evidence currently available, it is probably more effective than standard defibrillation and is most effective when performed early in shock refractory VF. In resource poor settings where DSD may not be feasible, changing the pad placement/vectors (VC) may be just as effective as DSD.

PoCUS as a Prognostic Tool in Non-shockable Cardiac Arrest

2020 AHA Guideline: “We suggest AGAINST the use of PoCUS for prognostication during CPR” (Class 3: No Benefit)12.

The REASON Study (Gaspari et al. 2016) was a non-randomized, prospective, non-blinded, convenience sample of 798 ED patients with non traumatic PEA or asystolic cardiac arrests5. The primary outcome was survival to admission and secondary outcomes included survival to hospital discharge and ROSC. Patients needed to have received at least 1 round of ACLS drugs. The initial PoCUS was performed and repeated during pulse checks using parasternal or substernal views.

Based on the rest of their results, the authors concluded that cardiac activity on ultrasound was the variable most associated with survival following cardiac arrest. Surprisingly, it was even more reliable than the presence of bystander CPR in predicting these outcomes. 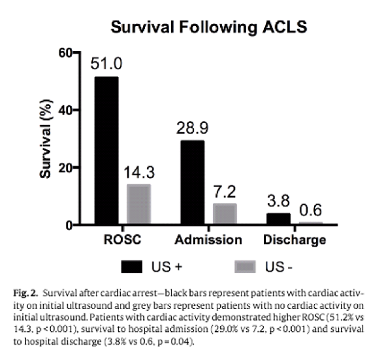 This study (Beckett et. al, 2019) was an observational study published in CJEM2. The authors assessed the prognostic value of PoCUS in comparison to rhythm analysis. They also looked to see if combining PoCUS and ECG rhythm findings together better predicted poor outcomes in cardiac arrest. This was a health records review of 180 cases of patients with OHCA with non-shockable rhythms. Their primary outcomes included ROSC, survival to hospital admission and survival to hospital discharge.

When using ECG alone, patients in asystole had an 82.7% chance of not achieving ROSC. PoCUS when used alone performed better with a sensitivity of 96.2% for failure to achieve ROSC. PoCUS performed better than ECG rhythm in all 3 outcomes of the study. When the patient’s rhythm was asystole and there was no cardiac activity on PoCUS, these patients had a 98.2% chance of NOT achieving ROSC. Of these patients, only 0.8% survived to discharge. 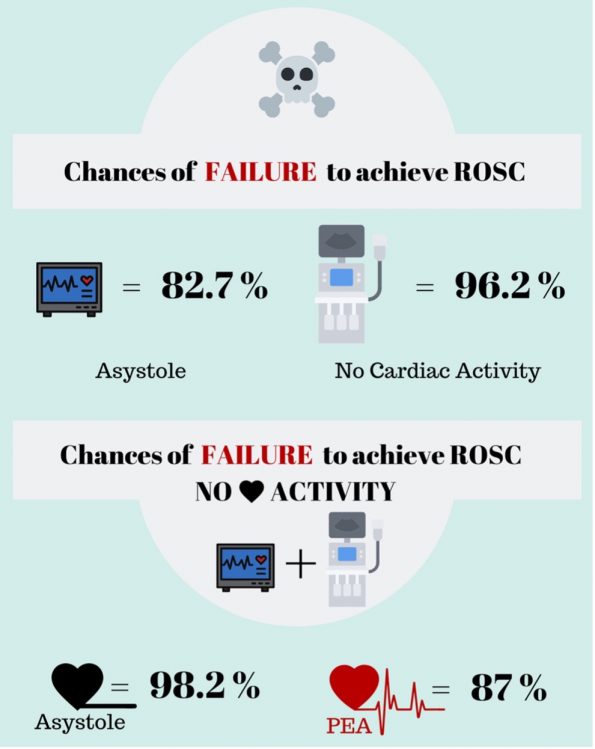 Sensitivity of initial ECG rhythm, initial PoCUS findings overall, and PoCUS findings in patients with ECG asystole, and PEA, for the prediction of no ROSC. (Lalande et al. 2019)

PoCUS is much better at predicting death than survival in patients with non-shockable cardiac arrests. The chance of survival to discharge for patients in asystole with absence of cardiac activity on PoCUS is less than 1% whereas the chance of obtaining ROSC is 50% in those with cardiac activity. This information should be used as a tool to further risk stratify cardiac arrest patients in addition to other prognostic variables.

This trial (Jacobs et al., 2011) was conducted in Australia and New Zealand8. It was a double-blind randomized placebo-controlled trial of epinephrine in 534 adults with OHCA. They compared epinephrine to placebo. Their primary outcome was survival to hospital discharge and secondary outcomes included ROSC and neurologic outcomes.

Unsurprisingly, they found a significant increase in ROSC with epinephrine versus placebo (23.5% vs 8.4%). Unfortunately, this study ended early due to ethical concerns and ultimately was underpowered to asses patient-centred outcomes such as neurologic recovery.

This was a multi-centre, randomized, double-blind, placebo controlled trial of 8014 patients with OHCA in the UK14. They compared IV epinephrine to saline boluses. Their primary outcome was survival t 30 days. There were multiple secondary outcomes, most notably survival to hospital discharge and favorable neurologic recovery.

Unsurprisingly they found a significant increase in the rate of ROSC in the epinephrine group in comparison tot he placebo (36.3% vs 11.7%). In the epinephrine group, 31.0% of survivors had a poor neurologic outcome, compared to 17.8% in the placebo group. Overall, in this study the authors found that the use of epinephrine increased the rates of ROSC but came at the cost of more ICU days, severe neurologic disabilities, and no difference in survival with favorable neurologic outcome compared to placebo. 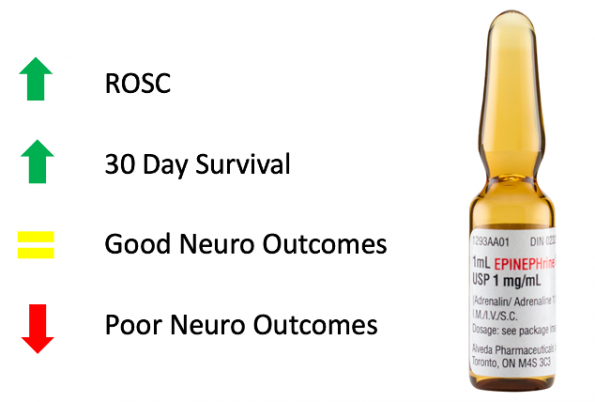 A meta-analysis was performed with the goal of assessing the effect of the initial arrest rhythm on the outcomes of the PARAMEDIC2 and PACA trials (Perkins et al., 2019).

When assessing ROSC, as expected, they found a combined OR of 4.7 favouring epinephrine. Patients with shockable rhythms had a much lower OR of obtained ROSC in comparison to those with non-shockable rhythms. A similar trend could be seen for survival and favorable neurologic outcomes at 3 months, although most of the results were not found to be statistically significant. Overall, what we can conclude is that relative to placebo, the effects of epinephrine on ROSC appear to be greater for patients with a non-shockable rhythm. There are similar patterns for long term survival and favourable neurologic recovery, but the difference in effect is less significant. 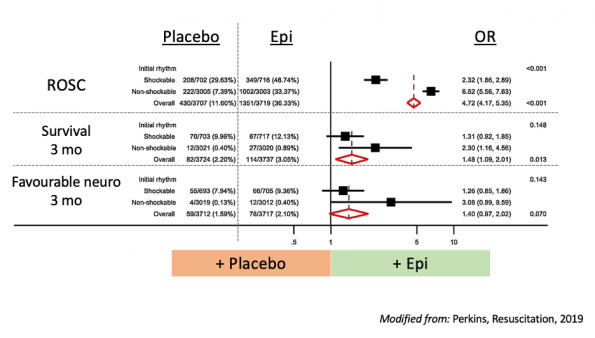 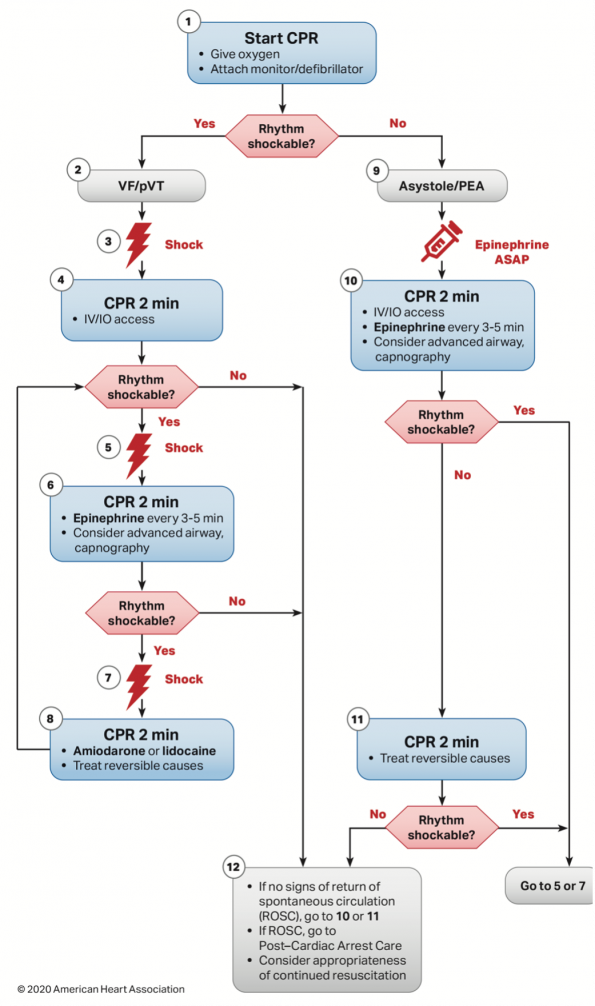 Epinephrine in cardiac arrests should be used with caution. Although it overall increases survival, it also significantly increases poor neurologic recovery. Patient with non-shockable rhythms likely benefit most from epinephrine, which should be administered as early as possible in this subgroup.

In summary, review of the current literature surrounding three aspects of the new ILCOR 2020 Guidelines, has led us to draw the following conclusions:

(1) Dual Sequential Defibrillation (DSD): According to ILCOR, DSD is not recommended due to poor evidence on the subject. However, preliminary data from the DOSE-VF trial demonstrates that DSD is likely safe, and possibly more effective than standard defibrillation when used early in shock refractory VF.

(2) PoCUS during Cardiac Arrest: Although not recommended for use by ILCOR guidelines for prognostication during CPR, evidence suggests that POCUS is quite reliable in predicting likelihood of death. It could play a role as an additional data point to assist risk stratification during cardiac arrest.

(3) Epinephrine use in PEA/Asystole: Early epinephrine use is most beneficial in the non-shockable subgroup. Overall excessive use of epinephrine should be done with caution, as poor neurological outcomes may be encountered.