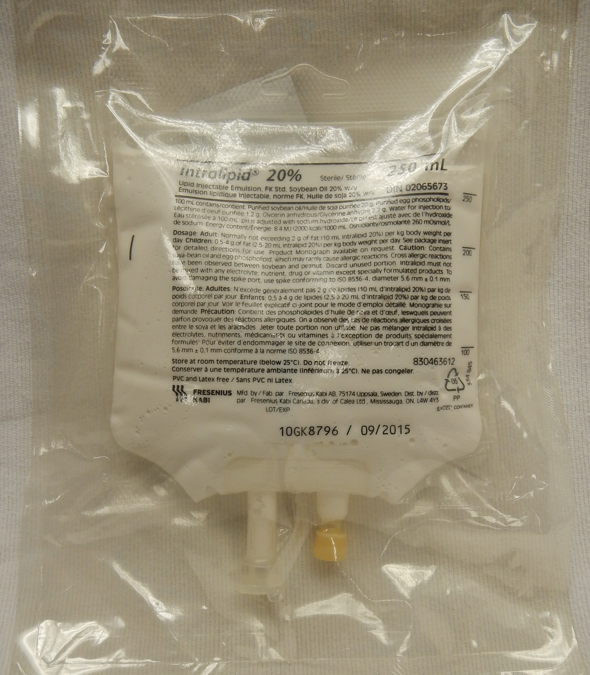 Much uncertainty still exists surrounding intravenous lipid emulsion (ILE) therapy. The precise mechanism of action remains unknown, no definitive consensus exists regarding its clinical indications, and there are no high quality studies evaluating its potential benefits in humans. We seek to review the available literature discussing ILE and provide you with some recommendations on its clinical application.

Intravenous lipids were originally created by Dr. Wretlind in 1962. The original intention of Intravenous Lipid Emulsion (ILE) was for total parenteral nutrition (TPN) (1). In 1997, Dr. Weinberg and colleagues noted a case of unexplained ventricular arrhythmia following a sub-toxic dose of bupivacaine in a healthy 16 year old woman. They later discovered that this patient had a carnitine deficiency, leading to their theory that carnitine deficiency was associated with increased susceptibility to bupivacaine toxicity (2,3).

Dr. Weinberg and colleagues tested their hypothesis in animal models in 1998. They injected intravenous lipids in animal models, as they believed this would mimic a carnitine deficient state. They discovered that rats pretreated with ILE required higher doses of bupivacaine to experience cardiac arrest. They also found that rats resuscitated with ILE following bupivacaine induced arrest had improved survival (2, 3, 4, 5). In 2003, they repeated these experiments in dogs, and again found that ILE improved survival following bupivacaine induced arrest (3, 5).

In 2007, the first clinical use of ILE outside of LAST was documented. A 17 year old woman presented to the emergency department following an intentional overdose on her Lamotrigine and Bupropion. She experienced refractory cardiac arrest for over 50 minutes. ILE was trialed as a rescue therapy, resulting in ROSC shortly thereafter (6).

The mechanism of action of Intravenous Lipid Emulsion (ILE) is not well understood. Many different theories have been proposed with the partitioning theory gaining widespread acceptance.

Originally, the lipid sink theory was favoured. This theory states that ILE creates an intravascular lipid layer, providing a binding surface for lipophilic toxins. It was postulated that this would subsequently remove the toxic drugs from the circulation (2, 3, 4, 7, 8, 9, 10, 11).

Critics have since stated that a static lipid reservoir would become saturated too quickly before removing sufficient toxin from circulation.

Research now supports the lipid shuttle theory, which builds on the lipid sink theory. This proposed modality states that, rather than a static lipid compartment, ILE acts as a scavenger of lipophilic toxins, removing the drug from sensitive organs and areas of high blood flow, such as the heart and brain, and redistributing them to other organs like the muscles for storage and the liver for detoxification (3, 4, 9).

There are proposed secondary modalities explaining the beneficial effects of ILE, including:

A 2016 systematic review performed by Hoegberg and colleagues studied every case of LAST treated with Intravenous Lipid Emulsion (ILE) published at that time. Their search yielded 76 publications on humans, consisting of 73 different case reports and one cases series, including 10 case reports not published elsewhere in the literature, totalling 83 unique cases. They found that 81 of the 83 cases treated with ILE survived.

Only 5% of cases did not identify a benefit following ILE use. 71% of cases stated a benefit was seen. The remaining cases either did not describe whether or not a benefit was observed following ILE, or stated that they could not attribute a benefit to a specific therapy as multiple interventions were being given simultaneously. 72% of cases used ILE in conjunction with other therapies.

Despite these promising findings, the authors noted a few significant limitations.The human cases were heterogenous, and the authors were not able to study the potential effects of these discrepancies on the intervention. The potential for publication bias was also discussed. The majority of studies included were case reports. With experimental therapeutic interventions, such as ILE, positive results are more likely to be published compared to negative results. This can result in false skewing of the data.

A systematic review published in 2016 by Levine and colleagues assessed every case of drug toxicity, managed with Intravenous Lipid Emulsion (ILE) . This study identified 141 publications on humans, with 65 unique substances being treated with ILE. The majority of these cases experienced central nerve system or cardiovascular symptoms, with a portion of these patients in cardiac arrest.

The classes of overdose ingestion with the highest clinical relevancy and largest number of cases treated with ILE included:

The majority of the documented patients and drug classes treated with ILE demonstrated improvement. An even larger majority of these cases subsequently survived. Despite these findings, the authors identified key limitations with the results. Similar to the previous systematic review, they noted that heterogeneity and publication bias were key limitations with the study.

Side Effects and Contraindications

Side effects of Intravenous Lipid Emulsion (ILE) differ based on the clinical context. When used as rescue therapy in the toxicity context, the side effects are uncommon and typically minor. When used as TPN, patients can experience the same side effects described in the rescue setting, as well as additional adverse outcomes. The side effects in TPN are typically proportional to the duration of therapy and the rate of the infusion (4).

Note: there were two cases of asystolic arrest within 60 seconds of ILE implementation. Both cases exhibited refractory hemodynamic instability prior to intervention, with hypotension and bradycardia not responsive to vasopressors and standard of care therapy management. It was concluded that this relationship was temporal to ILE administration, rather than causative. (10, 14)

The Association of Anaesthetist of Great Britain and Ireland (AAGIB) (16)

The American Society of Regional Anesthesia and Pain Medicine (ASRA) (9)