Did You Do a Pelvic Exam? 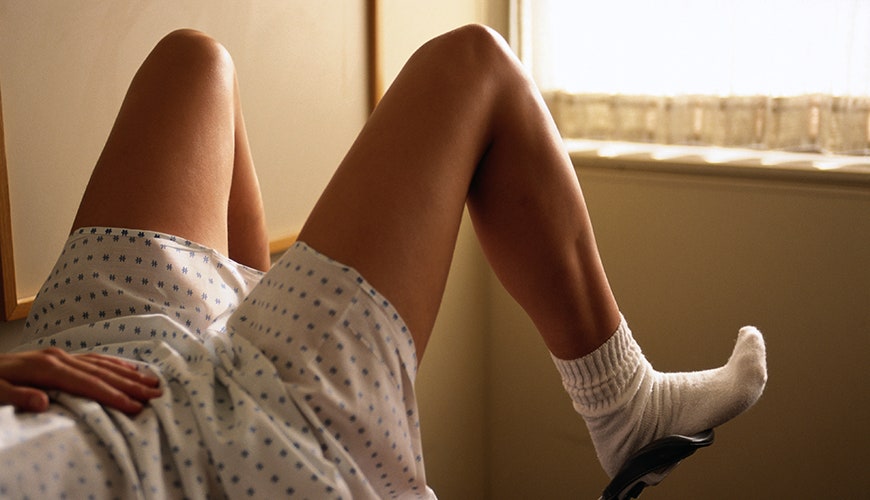 The role of the emergency department pelvic exam has come under debate for some time. Clinicians have raised concerns regarding whether or not it changes management, whether or not our findings are reliable, and of course the logistic barriers regarding space, time and chaperones. This topic could be approached from many angles, but this article will discuss three main objectives:

Reading across emergency department literature, obstetrical guidelines and discussing general practice patterns with emergency physicians and obstetricians, there is general agreement that a pelvic exam is necessary in patients with:3

These scenarios are excluded from the literature that debates the exam’s necessity. In patients with heavy bleeding or unstable vital signs, a speculum exam can facilitate the removal of blood clots or tissue at the cervical os, which can be both diagnostic and therapeutic. If seen, blood clots or tissue should be removed using ring forceps and sponges or gauze.

Cervical insufficiency should also be considered in early second trimester pregnancies. This is when the cervix opens prematurely in the absence of labour and can lead to miscarriage or preterm delivery. It is detected either via ultrasound or by seeing an open cervical os on exam. Second trimester patients should be worked up in the department because if cervical insufficiency is identified in an otherwise viable pregnancy, these patients need obstetrics consultation in the department for consideration of cervical cerclage. 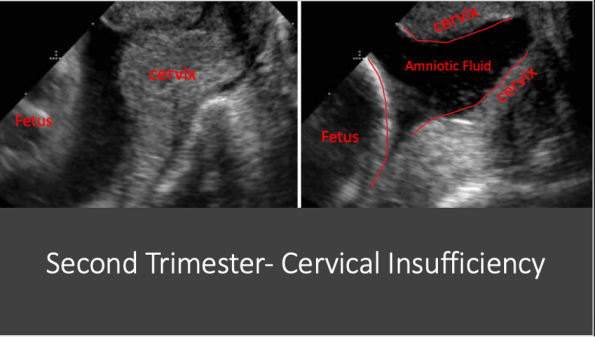 More commonly, we are faced with a stable first trimester patient, with relatively small amounts of bleeding. The following studies have attempted to assess the necessity of the pelvic exam in this population

Isoardi, 2009: Review article concluded that the pelvic exam provides no further diagnostic information over ultrasound and beta-hcg testing, with the caveat this is based on low quality evidence.4

Brown, 2011: Prospective study of both pregnant and non pregnant patients, which found 94% of patients did not have management changes based on pelvic exam. This study suggested there may be a subset of the population that could have the pelvic exam omitted, and recommended further study.5

Johnstone, 2013: Randomized study of 135 patients with first trimester bleeding. This study assessed accuracy of diagnosis between patient assessment and ultrasound findings. Patients were randomized to receive a pelvic exam or not as part of their assessment. The study found the accuracy of diagnosis was poor both with and without the pelvic exam. The authors concluded that there is no need for a pelvic exam when ultrasound is readily available. Unfortunately, this study was not powered to detect it’s primary outcome. These results should be interpreted with caution.6

Linden, 2017: Prospective, open label, randomized equivalence trial published in 2017. It included 202 patients under 16 weeks gestation with confirmed intrauterine pregnancy presenting with either lower abdominal pain or vaginal bleeding. Patients were randomized to pelvic exam vs no pelvic exam. The primary outcome was a large composite outcome including need for emergent procedure, transfusion, admission, infection, unscheduled return visits, intervention within 30 days, or identification of alternate source of symptoms. Composite primary outcome occurred in 19.6% of the group without exam vs 22% in the control group (had pelvic). Statistically they could not claim equivalence (predetermined accepted CI -8 to 8), this study was also significantly underpowered.7

I don’t think you’re ever wrong to offer the pelvic exam. At the end of the day, we don’t have the evidence to unify our practice pattern or refute guidelines. However, I do think we can improve our discussion with our patients regarding what the pelvic examination can and cannot offer. When discussing the pelvic exam with patients, I recommend we include the following points:

Ultimately this will be a shared decision between you and your patient.

If you are sending your patient home without a pelvic exam, I recommend they meet the following criteria: 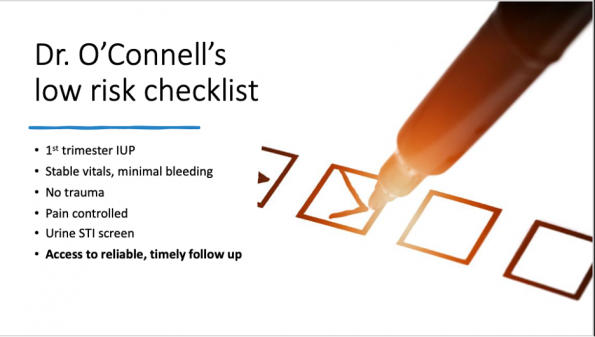 Consider doing an exam even in low risk patients who have had little to no recent medical or gynecologic care, as they are at higher risk of delayed diagnoses of polyps or malignancies.

Ectopic pregnancies occur when a developing blastocyst implants to any surface other than the uterine endometrium. 98% of ectopics are tubal, meaning implantation occurred at the fallopian tube.8 Ectopic pregnancies are estimated to occur at a rate of 2-3%, but it’s been estimated that the prevalence of ectopics in the pregnant emergency department population could be as high as 7%.9-11 A ruptured ectopic can be a life threatening emergency. So, can the pelvic exam help us make this diagnosis? The JAMA Rational Clinical Examination series published a systematic review in 2013 to address this question. It included 14 studies, totaling 12,101 patients.12 Test characteristics for each exam finding are outlined in the following table: 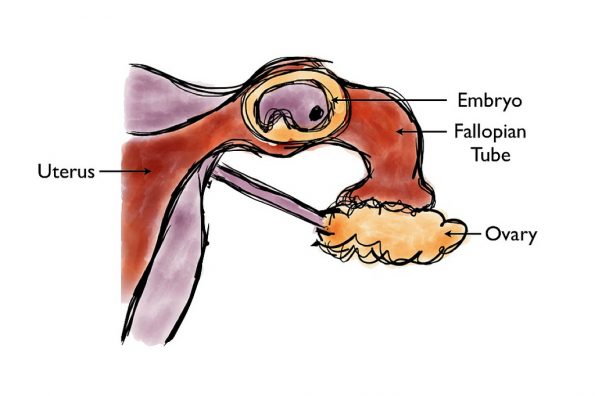 PID is an infection of the upper genital tract involving any combination of the endometrium, fallopian tubes, pelvic peritoneum and contiguous structures. Physical exam findings are key to diagnosis, so the importance of the physical exam is not up for debate. If PID is on your differential, the patient requires a pelvic exam (if they are agreeable). Any patient with a uterus/cervix/fallopian tubes and unexplained lower abdominal pain should have PID on their differential. The CDC estimates that up to 2/3 of cases go unrecognized!

PHAC Diagnostic Criteria:The PHAC guidelines list their minimal diagnostic criteria as lower abdominal pain, CMT and adnexal tenderness, but they don’t provide any information regarding how many of these exam findings should be present.14 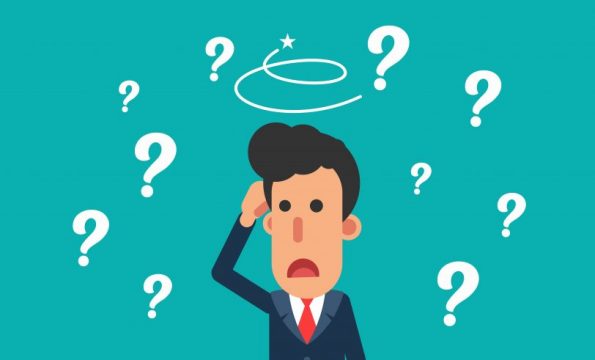 Unfortunately, there is no single historical, physical or laboratory finding that is both sensitive and specific for PID. The diagnosis is difficult, as only 1/3 of cases will have fever, causative organisms include both those are sexually transmitted and some that are not, and negative swabs do not rule out PID. Untreated cases have a high risk of future complications, including but not limited to tubo-ovarian abscess, chronic pelvic pain, ectopic pregnancy and infertility.13,15 While cervical pathogens such as gonorrhea and chlamydia make up 50-85% of cases, many other organisms that can lead to infection of the upper genital tract. These include enteric and respiratory pathogens, as well as endogenous organisms such as those frequently responsible for bacterial vaginosis.16

There is also variety in the interpretation of physical exam findings, as demonstrated by a 2001 study by Close and colleagues.17 In this study of 186 patients, attendings and senior residents who decided a pelvic was needed as part of their assessment had another physician repeat the exam. Agreement of findings between the two physicians was assessed. Reliability < 50% deemed poor prior the start of the study. Agreement on exam findings ranged from 71-84% overall, but in positive exam findings, agreement was only 17-33%, with lowest agreement of 17% occurring for the detection of cervical motion tenderness.

A large prospective study in the early 90s identified the risk of tubal factor infertility in patients with PID was just over 10%. The risk of TFI increases with the number of episodes of PID, with infertility rates of nearly 40% after 3 episodes. The risk increased further if you were over 25 years old at age of first infection.15

PID is reported to be the leading PREVENTABLE cause of infertility.

Now that we have made diagnosis, how are we going to treat it?

Some patients will require admission to hospital for PID, including but not limited to:

A few more notes on PID 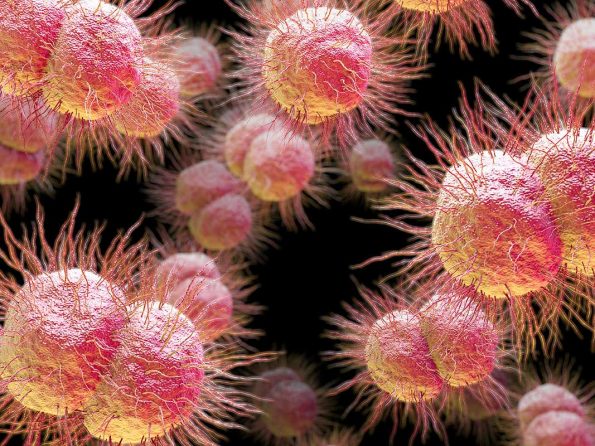 Increase your suspicion for PID! Any patient of reproductive age with a uterus and unexplained acute lower abdominal or pelvic pain should be screened for G/C, undergo pelvic exam if agreeable and considered for diagnosis and treatment of PID, even if physical exam findings are equivocal.

Teenagers who have never been sexually active with insertive intercourse should not have a speculum exam. However, remember that these patients are still at risk of PID as sexually transmitted infections can spread via other forms of sexual contact. If you’re asking your teenage patient if they are sexually active and they say no, you need to clarify what exactly they mean. This is a great population to take advantage of urine NAT testing or self swab for gonorrhea and chlamydia. Also consider throat swabs for G+C in teenage patients with persistent or non resolving pharyngitis.

Any patient with a vagina, cervix, uterus, fallopian tubes or ovaries is at risk of gynecologic pathology. For transgender patients, ask where they are in their transition. Are they on hormones? Have they had surgery? If so, which ones? In Canada, there are only a few clinics doing bottom surgery. Many patients transitioning will have pelvic organs from their sex assigned at birth. For patients on hormone therapy, remember that testosteronized vaginas get smaller, so use a smaller speculum or even a pediatric speculum in these cases. Consider using the neutral phrase “genital exam” rather than pelvic exam, and mirror the language that patients use for their own anatomy.

Patients with significant vaginal bleeding will often be in monitored stretchers that don’t break in half. In these cases, try flipping the speculum upside down and inserting it with the handle up. This way the handle is not getting caught on the bed.

Patients who have had multiple children or have higher BMI can have vaginal walls that obstruct your view of the cervix. In these cases, there are several tricks to optimize your view. One option is to cut the end off a condom and place it over the speculum. Another option is to use tongue depressors to hold the lateral walls of the vagina out of your view once your speculum is inserted.

For some patients, the pelvic exam is a lot different than an abdominal or cardiac exam. Patients with a history of sexual assault and trauma can have a complex relationship with the pelvic exam. So how can we approach this?