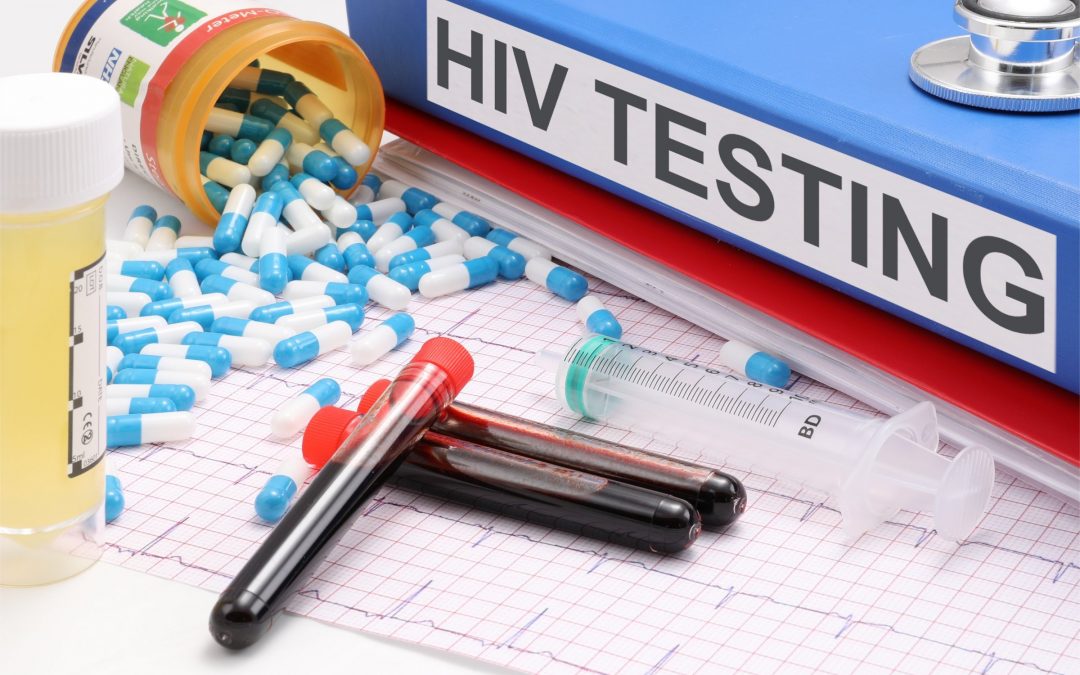 When it comes to human immunodeficiency virus (HIV) in the ED, the most medically interesting pathology is in the acute presentation of AIDS-defining opportunistic infections. However, due to advances in anti-retroviral therapies (ART), you’re much less likely to encounter an AIDS-defining illness in the ED. It is for this reason that this article’s main focus is the importance of RECOGNITION and MANAGEMENT of acute HIV presentations.

In this two-part blog series, we hope to outline the following:

In 2014, the UNAIDS group released a plan to change the trajectory of how HIV/AIDS was being approached on a global level. Their goal was not only to set new goals, as the 2015 projected target to have 15 million people on ART worldwide was coming to an end, but also to shift the paradigm. The 90-90-90 target emphasized that the epidemic could feasibly be ended by 2030 if by the year 2020:

With this achieved, at least 73% of persons living with HIV would be virally suppressed, significantly reducing the potential for spread and perpetuation of this epidemic. Prior to the advent of ART, a patient diagnosed with HIV at age 20 was only expected to live an average of 8 to 12.5 years, whereas now, if a patient adheres to their treatment regimen, they could live an additional 55 years; just 5 years shy of the uninfected. But arguably just as importantly, as per the PARTNER (2016) and PARTNER2 (2019) trials, patients adherent to their ART medications among serodifferent couples (that is, couples with only one HIV positive partner) had essentially zero risk of transmission within that couple.

Although the ultimate incentive for meeting these goals is the wellbeing of those living with HIV, there is also a fiscal incentive. ART was previously provided to patients approaching CD4 counts <200. The 90-90-90 targets suggest that in a country like South Africa – where HIV is much more prevalent than Canada (7.5 million in SA and 62, 000 in Canada) – an estimated $30 billion USD could be saved by 2050 if all HIV-positive patients received ART. Rather than simply seeking to reach an arbitrary milestone number of patients on ART, the newer targets shift the focus to ART-related outcomes. This emphasizes the therapeutic and preventative benefits of ART, equity across all populations at higher risk, and the need to accelerate intervention in order to outpace transmission. 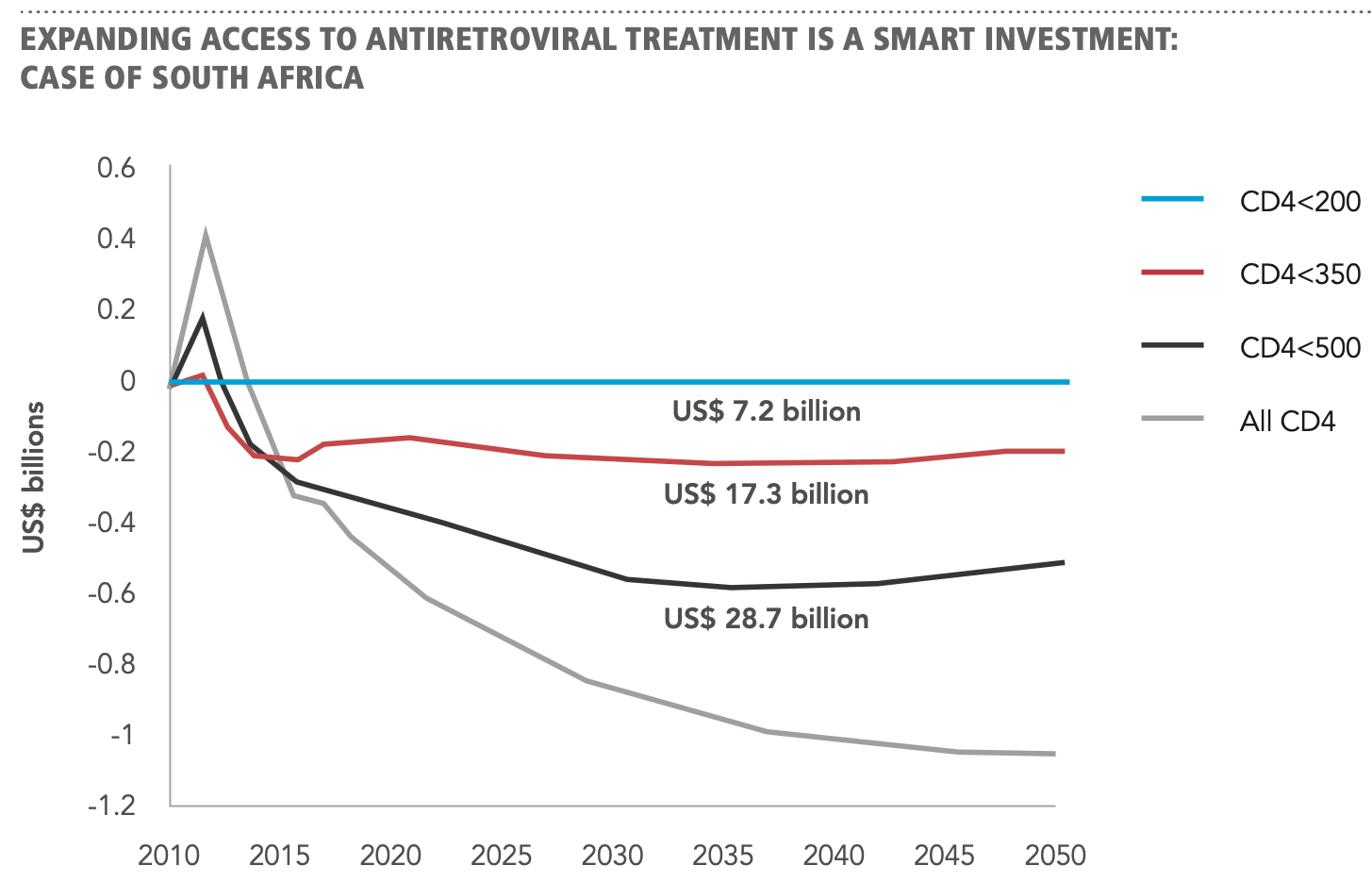 So now that we have passed the 2020 deadline, how have we been doing? UNAIDS 2021 data shows that as of 2020 the world had fallen shy of the mark, but that significant strides had been made. Diagnosis was up 31%, initiation of ART was up 32%, and achieved viral suppression was up 34%.

PHAC and the Canadian AIDS Treatment Information Exchange (CATIE) collaborated on the below infographic to illustrate Canada’s most recent estimates for 2018. An estimated 87% of people living with HIV having been diagnosed, 85% of those diagnosed have been started on ART, and 94% of those on ART had a suppressed viral load. 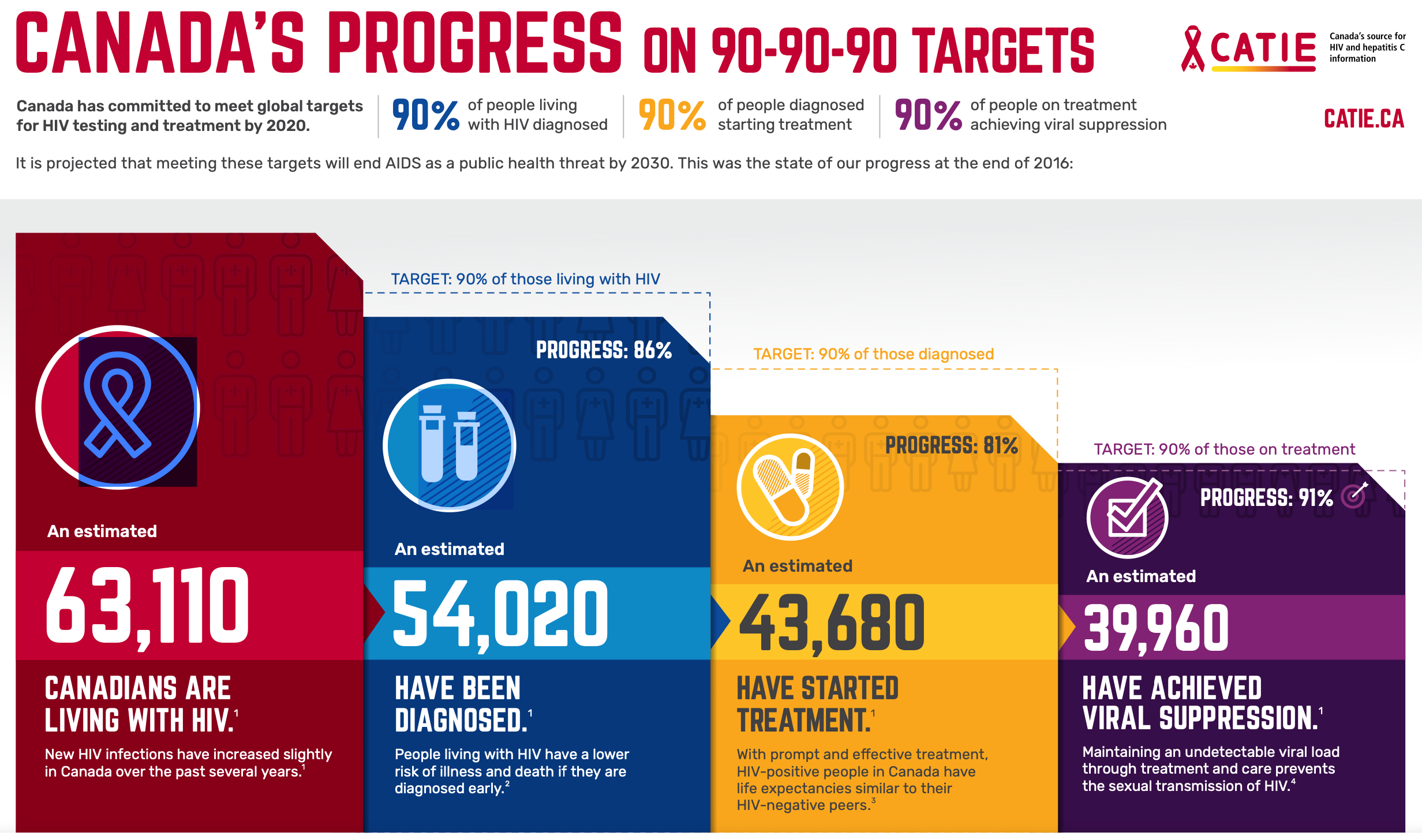 So, what does this have to do with us as emergency care providers? In corresponding with the Director of Communications at CATIE, the new targets to be announced will be increased to 95-95-95 now that the 2020 deadline has passed; 90-90-90 was just the first step. As providers with experience caring for populations at higher-risk, we have a large stake in advocating for our patients and contributing to the progress towards these targets.

STAGE 1 is variable in terms of the timeline from inoculation to onset of symptoms. Patients will generally display symptoms 2 to 4 weeks following infection. Some may present with symptoms as late as 3 months after infection. At this stage, the virus replicates very rapidly, while destroying CD4+ T-lymphocytes. The Acute Retroviral Syndrome is typically described as a flu-like or mononucleosis-like illness. The patient will often complain of fever/chills, fatigue, malaise, myalgias, arthralgias, headache, loss of appetite, rash, night sweats, mouth ulcers, and weight loss. According to Hecht et al., fever and rash carried the highest risk for primary HIV infection whereas oral ulcers and weight loss were the most specific. The rash in acute HIV infection is described as a symmetrical, maculopapular, erythematous exanthem that involves the face, palms, soles, trunk, and limbs. However, it can also present as mucocutaneous ulceration. Stage 1 is the highest-risk stage for transmission to another individual not only due to exceptionally high viral load, but also due to the lack of knowledge of their diagnosis.

STAGE 2 is typically asymptomatic, making it exceptionally difficult to identify. The only two clinical indications of chronic infection, according to PHAC, are thrombocytopenia and generalized lymphadenopathy. During this phase, HIV continues to replicate (albeit at a much slower rate), the CD4 count progressively drops, and the virus can still be transmitted to others. Diagnosis in this stage is less often made, unless there is another indication for testing such as patient self-identification of a higher-risk event, acute presentation with another STI, or presentation with an AIDS-defining illness in their transition to Stage 3.

STAGE 3 is beyond the focus of this post. It is worth knowing, however, is that the CDC definition for AIDS requires EITHER the presence of an opportunistic infection (OI) OR a CD4+ count < 200 cells/μL. Both criteria often coincide in the same patient and the opportunistic infections will show up with progressively diminishing CD4 counts. The opportunistic illnesses found in AIDS patients vary widely from malignancies like Kaposi sarcoma and CNS lymphoma to rare infections like myobacterium avium complex or toxoplasmosis. 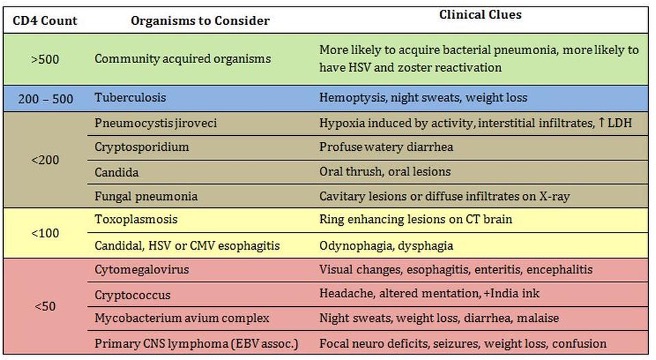 HIV Testing – What does PHAC recommend?

According to PHAC, unless someone is already known to be HIV-positive, an HIV test should be provided to anyone:

Many of these recommendations seem like a no-brainer but the one that often falls on deaf ears is the patient requesting an HIV test. Patients are unlikely to seek out the ED for an HIV test, unless compelled by fear or lack of knowledge of how HIV is transmitted.  It is our duty as emergency physicians to hear these patients out, to risk-stratify them into higher and lower risk, and to provide them with education on the topic. Apart from the above recommendations and a thorough sexual history, there are higher-risk populations that we should be prepared to identify according to PHAC:

It is worth noting that transgender and gender-diverse (TGD) patients are also at higher risk. In particular, trans women of colour are subjected to the highest risk of HIV infection amongst sexual and gender minorities (SGMs). Other groups disproportionately affected include those who are unhoused, indigenous, sex workers, and/or racialized.

It is also recommended that you ask your patients about any engagement with sex work, either as a sex worker or client, and to ask questions about current or planned pregnancies. According to PHAC data, pregnancy is a particularly important facet to explore as the risk for vertical transmission is between 15-30% for those not on ART. With early diagnosis and initiation of anti-retrovirals, the rate of transmission can be reduced as low as 0.6%. Caesarian section alone can reduce the vertical transmission by 50-80%. Finding out if the patient is pregnant, either by asking the patient or performing a urine β-HCG will inform you whether you need to provide counselling or offer testing.

Figure 7 | Estimated risk of transmission by sex act and viral load, regardless of treatment status (PHAC, 2012).

This a rare opportunity for us to participate in preventative medicine, which can avert significant illness in the future. However, even the identification of who we believe might be higher or lower risk is never black and white. One of our local infectious disease experts, Dr. Michaeline McGuinty states:

“The bias of categorizing patients as “high risk” and “low risk” means that certain patients are routinely over-tested, but for other key groups the diagnosis is never considered. In particular: women are rarely tested even when they present with OSCE-classic retroviral syndromes… Outside of North America, women represent >50% of the HIV+ population, and diagnoses among heterosexual women are rising even in our low-prevalence bubble. My key advice here is that ordering more HIV tests is never the wrong answer; universal adult screening is recommended anyway, and identifying it is always better than missing it.”

In order to appropriately choose testing in patients we suspect may have acute HIV, we must also have some understanding of the microbiology of an acute HIV infection. 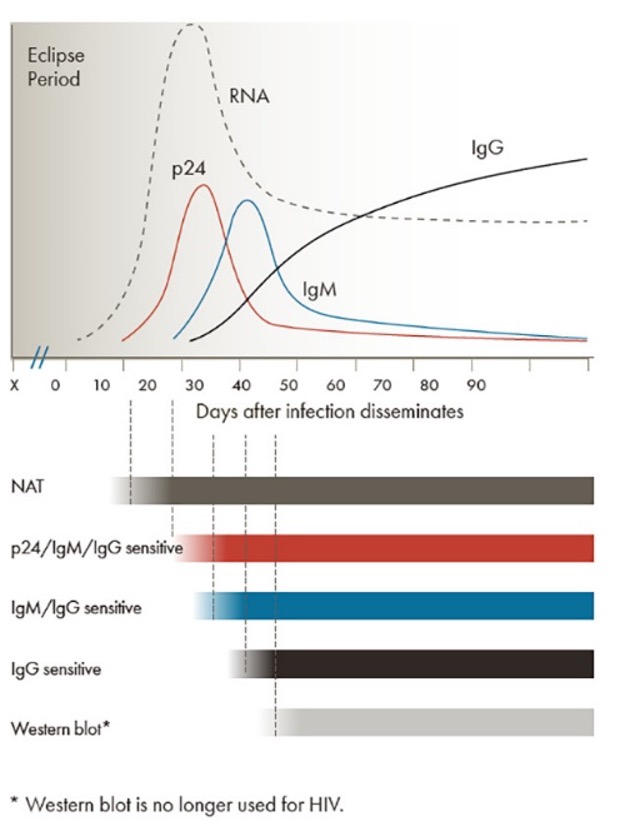 HIV RNA levels are the first to increase and do so rapidly, followed by a peak in p24 antigen at approximately 15-30 days post-inoculation. IgM and IgG antibodies against HIV start to rise after approximately 30 days. While the acute phase IgM will be significantly diminished by around 50 days, the IgG continues to rise. Dr. Marc Desjardins, our local PhD in Microbiology at the University of Ottawa, recommends that our first step is to order HIV1 and HIV2 antigen/antibody via CMIA (chemiluminescent microparticle assay). Whether your institution has an electronic medical record or still work with paper charts, the way to complete this testing is by means of your provincial public health requisition (Public Health Ontario, in our case). If the initial test is negative, or indeterminate then a second test for p24 using enzyme-linked fluorescent assay is sent followed by a neutralization assay if positive. This whole process takes between 3 and 6 days. The advantage of this combo-screen is that it captures patients as early as 2 weeks from the inoculation, when they are likely to present with an antiretroviral syndrome. The disadvantage of course is that patients presenting inside of that initial two-week period, have a high likelihood of testing negative. Many of you reading this might then ask, if there is a 2-week gap between inoculation and the antigen/antibody presence in the blood, shouldn’t we be doing HIV RNA testing based on this graph? It becomes detectable shortly after infection and persists throughout the course of the disease unless suppressed with ART. In fact, nucleic acid amplification tests (NAAT) for HIV RNA are recommended by PHAC as an optional test, but they report that it is primarily used in babies born to HIV-positive mothers. Alternatively, this testing can be done in immunosuppressed patients who test negative or those with persistently indeterminate results. The majority of tests are sent to the national HIV lab in Winnipeg where a qualitative RNA PCR for HIV1/2 can be performed.

Fortunately, Health Canada approved self-testing for HIV in 2020. The brand INSTI allows patients who may not have access to HIV services – especially those that struggle with the associated stigmatization and discrimination – to test themselves at home. There are several formulations of the INSTI including HIV1/HIV2 antibody tests, HIV/Syphilis combo tests, as well as HCV testing. They all boast >99% sensitivity and specificity, but PHAC recommends that these should not serve to replace testing in a dedicated testing facility but can allow the patient to risk stratify their sexual encounters and to avoid indiscriminate transmission.

For those with chronic HIV not taking their ART, two of our local ID experts (Dr. McPherson and Dr. Kravcik) recommend treating unwell patients like all others while including a CD4 count to guide management but also, if available at your centre, to send a viral load as this is the most useful for ID colleagues.

Stay tuned for part 2 for more!