BHP Corner – To TOR or not to TOR? 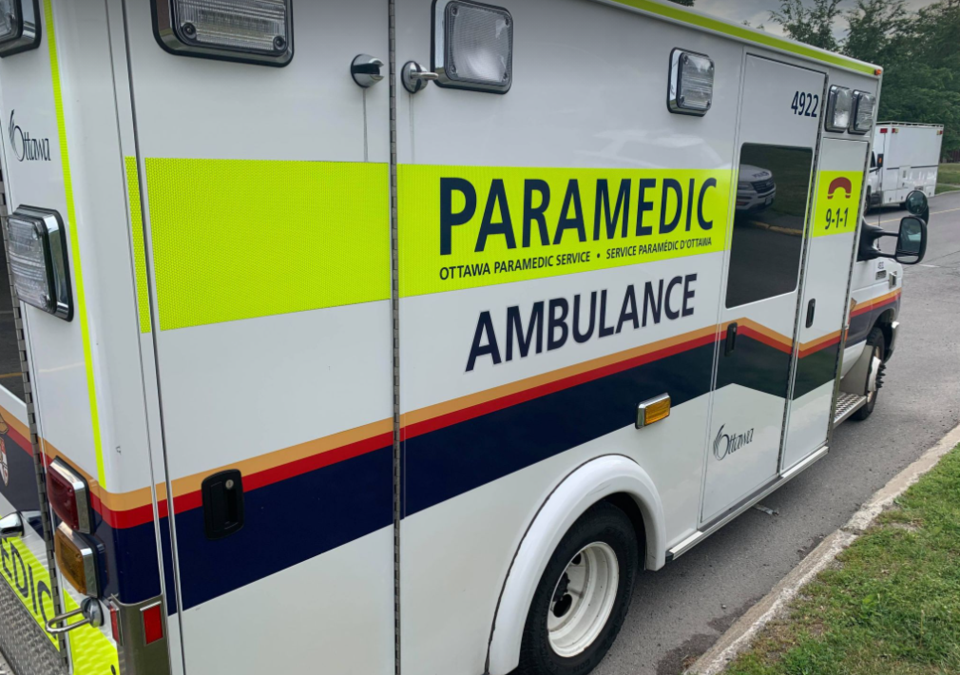 Medical Cardiac Arrest – To TOR or Not To TOR?

First up – Termination of Resuscitation.

Everyday, EMS providers respond to patients in cardiac arrest who fail to revive during pre-hospital resuscitation. This is the most common reason why a base hospital physician will be consulted. Over the past two decades, prehospital Termination of Resuscitation, or TOR, has become a standard practice for those whom ongoing resuscitation is determined to be futile.

This patch point allows paramedics to call the BHP during active cardiac resuscitation, if certain clinical criteria are met, to request a medical TOR.

The benefits of prehospital TOR are numerous:

Most importantly, prehospital TOR puts the focus at the scene on the interventions that are known to make a difference in outcomes in cardiac arrest:

Studies have repeatedly shown that paramedics and families are comfortable with prehospital TOR.

With the above mentioned benefits to prehospital TOR, it’s natural that paramedics would hope for and expect their request for TOR to be granted. However, at times, a BHP will leave their EMS colleagues frustrated and questioning why a particular individual has been suggested to be transported to hospital, despite a TOR being requested.

“Why might the Base Hospital Physician recommend transport to the hospital when the paramedic patches and asks to consider prehospital TOR?”

Let’s begin with the premise that we all agree that the benefits of prehospital TOR must be balanced with the imperative to ensure we do not cease resuscitation on a person who would have survived had efforts been continued. Or, in other words, as we embrace the value of prehospital TOR, we don’t want to “miss” a survivor through premature termination of resuscitation.

A look at the Evidence

Next, let’s look at what the studies show us about the predictors of survival in prehospital cardiac arrest.

The initial studies that examined what happens to patients who do not respond to prehospital ACLS were done in the United State’s in the 1990s. These showed that while most patients did not survive despite transport to hospital, there were a few survivors to hospital discharge in the cohort. The survivors either had sustained ROSC at some point in the resuscitation, or shock refractory ventricular fibrillation or tachycardia.

A more recent study performed in Montreal found a survival rate of 8% for patients who had received up to 9 shocks for shock-refractory ventricular arrhythmias. For this reason, patch physicians (and paramedics) are likely to consider continued resuscitation and transport for these patients (refractory VF/VT or sustained ROSC during resuscitation).

For PCPs, we have the world’s best evidence for TOR derived and validated by researchers here in Ontario. In 2006, the TOR researchers found that when paramedics attended the scene of cardiac arrest from presumed cardiac cause and 3 criteria were present:

1.  It was not witnessed by a first responder;

2. There was no ROSC during the resuscitation, and;

3. No shocks were delivered.

More recently, in an external validation study, of the BLS TOR rule carried out in British Columbia, the TOR rule recommended termination for 4,367 patients out of 6,994 at the 6-minute mark of the resuscitation (the time of the mandatory patch point in the ALS PCS), and 92 of these patients survived. In other words, for every 100 cardiac arrests, 2 patients could survive at 6 min despite meeting the TOR criteria. Most of these patients had good neurological outcomes, even though the rule predicted they would not survive. If the resuscitation continued and the rule was applied at 20min, <1% survived, and at 30 minutes, the rule performed much better and there were no survivors. Of note, of the survivor for whom the rule predicted termination at 6 minutes, nearly all achieved ROSC prior to transport, indicating the benefit of on-scene efforts rather than transport with CPR in progress. 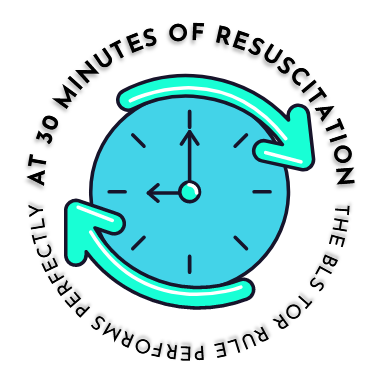 Some Patients Benefit From More Resuscitation

You can see that while the rule is quite accurate at identifying non-survivors, it is not perfect. Clearly there are patients you will encounter for whom the prognosis seems poor, but who will go on to survive if an aggressive resuscitation continues. Unfortunately, there are no black and white rules for identifying survivors with 100% accuracy. This is the reason for the need for early consultation with the base hospital physician. Clinical judgement is required, considering factors such as: 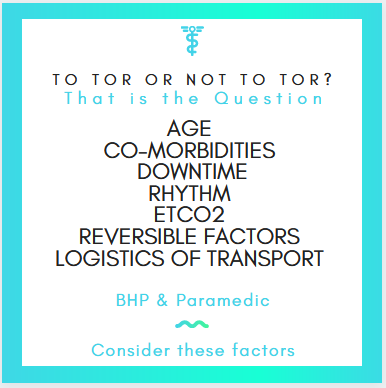 There might be circumstances where we agree that transport with CPR is not going to be helpful, but we believe further resuscitation is warranted, especially considering the evidence presented above. In these cases, we might recommend further attempts to establish ROSC at the scene before deciding to terminate (i.e. work the patient longer and call the base hospital physician back).

Conversely, some patients might benefit from early transport. Consider causes of arrest that could be reversed with hospital-level care:

Some findings could indicate a favourable prognosis and might benefit from early transport – for example a narrow complex PEA AND EtCO2 >20mmHg (is the pulse just too weak to feel?).

Therefore it is important for EMS providers to consult the base hospital physician early if they think the patient would benefit from a different approach than the traditional advanced directive. Unfortunately, there is no one-size-fits-all strategy, and the excellent clinical judgment of EMS providers is required.

As much as the base hospital physician must be satisfied that we are dealing with a non-survivor before recommending TOR, the paramedics at the scene must be comfortable with this disposition as well. Prehospital care physicians or BHP understand the medicine and their colleagues capabilities, but are not at the scene. There are factors that a physician cannot fully appreciate that may influence a paramedics comfort with TOR. It is imperative to know that TOR is a collaborative decision between the scene providers and the base hospital physician.

TOR should never be recommended if the on-scene medical providers/paramedics or the family are uncomfortable with the decision, and would prefer to transport. The decision for TOR MUST BE COLLABORATIVE.