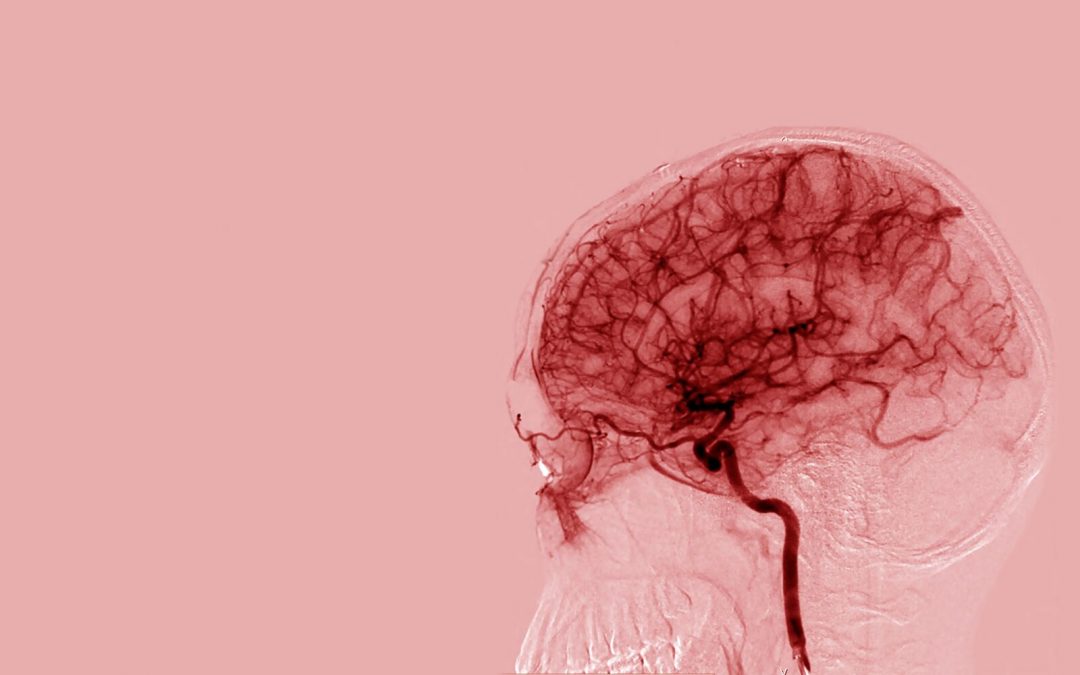 While most strokes we see are ischemic in nature, 10% of stroke presentations are intracerebral hemorrhages (ICH) 1.  However, unlike ischemic strokes that have clear and evolving pathways for treatments, novel treatments for spontaneous intracerebral hemorrhages (ICH) are lacking. Because of this, the American Heart Association and American Stroke Association created guideline recommendations for the management of spontaneous ICH. This blog post will provide you with a focused review of this evidence tailored to the emergency clinician.

Before you dive into the details, it is important to remember that the management of spontaneous ICH is an emergency medicine condition. And just like an acute ischemic stroke, time = brain in these cases.

The AHA/ASA guideline 2 is for the management of spontaneous “primary” ICH only. This means it is not due to trauma or structural lesions (such as AVM, saccular aneurysms, or hemorrhage-prone neoplasms) and focuses on pathologies such as arteriolosclerosis and cerebral amyloid angiopathy. 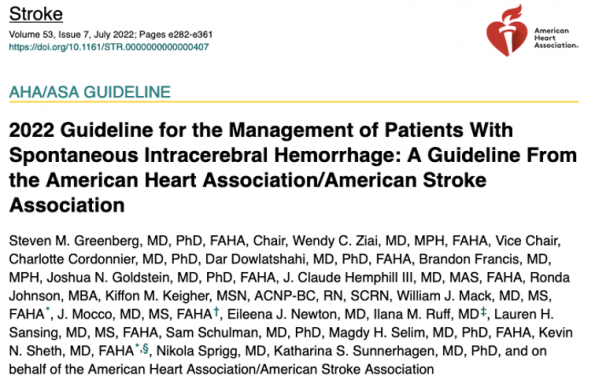 From an emergency perspective, the guidelines emphasize systems of care, noting that stroke networks improve outcomes due to timely recognition, transport and pre-hospital notification. Of note, the recommendations for spontaneous intracerebral hemorrhages in the pre-hospital setting are identical to ischemic strokes. This is because despite efforts to distinguish between the two entities in the pre-hospital setting, it is not currently possible without neuroimaging.

The guideline provides 10 key recommendations, the specifics of which can be found by reviewing the full guideline document. This post summarizes the most relevant take-home points for emergency medicine providers.

The test of choice for spontaneous ICH is CT/CTA.

CT/CTA confirms the bleed, estimates its size and identifies any underlying lesions. Additionally, it allows us to identify other imaging markers related to the risk of hematoma expansion, such as the spot sign.

Early hematoma expansion is common, and worse outcomes are associated with a larger hematoma, evidence of intra-ventricular extension and initial decreased GCS 3. Therefore, the treatments aimed at limiting this expansion due to direct pressure effects are our focus in the emergency setting. These include BP control, reversal of anticoagulation and neurosurgical interventions.

When we look at the evidence about BP control, we find that early initiation of continuous smooth and sustained BP control improves outcomes.

The AHA/ASA recommends initiating treatment within 2 hours of symptom onset. Additionally, this is the first time the guide indicates a clear upper limit to the target.

Overall, the body of evidence agrees that <130mmHg systolic can cause harm and that earlier BP control <2 hours since symptom onset yields better outcomes 4–6. Additionally, there is evidence that BP variability leads to worse outcomes 7 which led to the integration of smooth blood pressure control.

The AHA/ASA guidelines do not reference the type of medication to use for BP control in contrast to Canadian Stroke Best Practice guidelines that recommend labetalol, hydralazine, enalapril or nicardipine 8. Of note, Nicardipine is not available in Canada, and poor renal function is a contraindication to Enalapril. As such, the overall recommendation is to use what you’re comfortable with and what is available to you among those medications. Additionally, AHA/ASA makes no recommendations on invasive versus non-invasive BP monitoring. However, it is reasonable to consider an arterial line if you have a patient with difficult-to-control BP or those you are starting an infusion on.

The evidence on the safety of early intensive BP lowering and target BP in large/severe ICH groups is less clear as these patients were excluded from the trials. However, given that prognosis is still difficult in these groups, it is reasonable to lower them to target early and with smooth control, while simultaneously assessing severity and prognosis.

Warfarin: The evidence shows that PCC > FFP for reversal of INR, and that Vitamin K should be given early to reduce hematoma expansion and rebound INR.

Xa Inhibitors: First off, the utility of testing levels is not yet established apart from letting you know if there is a drug present. There is no data to say that we should follow levels as a reversal target. The guidelines discuss the use of Andexanet-alpha for the reversal of Xa inhibitors as a reasonable reversal agent (level 2a recommendation) and that PCC can also be considered (level 2b recommendation). However, at present, the cost of Andexanet alpha is very high and superiority with improved functional outcomes hasn’t been yet established in this patient population. As such, PCC is still reasonable to use for Xa inhibitors in our practice setting.

Dabigatran: Dabigatran on the other hand has a specific reversal agent (Idarucizumab or “Praxbind”) that is recommended in the guidelines and is available in Canada. Additionally, it can be dialyzed.

Heparin: Protamine can be used to reverse if <12 hours since LMWH and immediately if on infusion. It should be used with caution as it can lead to hypotension and bronchoconstriction.

For a more detailed review of anticoagulation reversal, refer to our most recent blog post on this topic.

One area of future treatment in ICH is in hemostatic agents. TXA is not yet recommended in spontaneous ICH patients as the evidence for functional outcomes hasn’t been established. The TICH-2 9 study showed a reduction in hematoma expansion but no difference in functional outcomes. At this time, hold this space until TICH-3 is published.

Take Home Point #4: “…For emergency or critical care treatment of ICH, prophylactic corticosteroids or continuous hyperosmolar therapy appears to have no benefit for outcome…platelet transfusions outside the setting of emergency surgery or severe thrombocytopenia appears to worsen outcome…prophylactic antiseizure medications in the absence of evidence for seizures do not improve long-term seizure control or functional outcome.”

We are reminded of the evidence in this guideline of things to avoid in our patients:

Take Home Point #5: Minimally invasive evacuation of supratentorial ICHs and intraventricular hemorrhages‚ compared with medical management alone‚ have demonstrated reductions in mortality…evidence for improvement of functional outcome with these procedures is neutral, however. For patients with cerebellar hemorrhage, indications for immediate surgical evacuation with or without an external ventricular drain to reduce mortality now include larger volume (>15 mL) in addition to previously recommended indications of neurological deterioration, brainstem compression, and hydrocephalus.

There are 2 critical Level 1 recommendations emergency clinicians should be aware of:

Otherwise, surgically accessible bleeds may have improved outcomes with surgery versus medical therapy alone in select patients. The evidence shows us that in younger patients and those with lobar bleeds close to the cortex without intraventricular extension 12. Craniectomy versus minimally invasive evacuation is based on the centre and surgical experience at your site. The minimally invasive approach is newer with promising evidence 13 and as more evidence is established the recommendations will likely change. Neurosurgical intervention may be more beneficial in certain cases:

Take Home Point #6: The decision of when and how to limit life-sustaining treatments after ICH remains complex and highly dependent on individual preference…do not attempt resuscitation status is entirely distinct from the decision to limit other medical and surgical intervention…the decision to implement an intervention should be shared between the physician and patient or surrogate and should reflect the patient’s wishes as best as can be discerned. Baseline severity scales can be useful to provide an overall measure of hemorrhage severity but should not be used as the sole basis for limiting life-sustaining treatments.

Overall early prognostication in ICH is difficult and uncertain.

The guideline strongly recommends using ICH scores for a measure of severity, not mortality, and not limiting treatments based on severity alone. At this time there is a lot of uncertainty about true mortality in larger bleeds. Practically, if your patient is dependent and pre-palliative before ICH, they are likely palliative now, but otherwise, prognostication is difficult to ascertain in the hyper-acute setting. Therefore, in the emergency medicine context unless there are pre-specified wishes, treat first to allow time for prognostication and approach goals of care later. 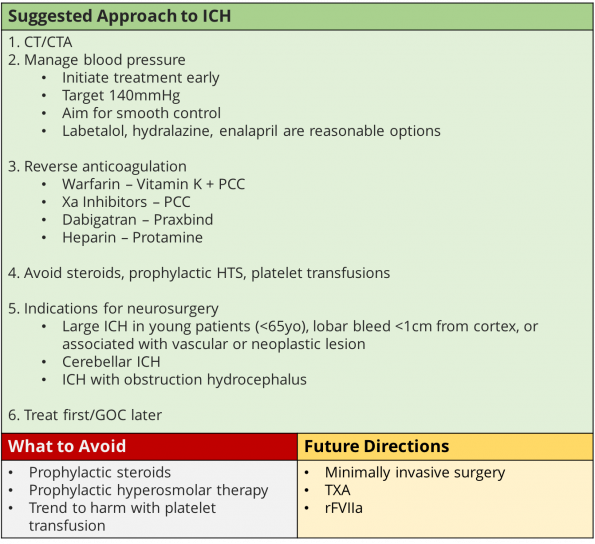