In this post, we will review several recent updates related to pre-hospital medicine. Specifically, we will:

TXA is a synthetic derivative of the amino acid lysine. It is an anti-fibrinolytic agent that acts by binding to plasminogen and blocking the interaction of plasminogen with fibrin, thereby preventing dissolution of the fibrin clot.

TXA has been available for more than 20 years and was first approved by the US Food and Drug Administration (FDA) in 1986 for short-term use (2 to 8 days) as an injection to reduce or prevent bleeding during tooth extraction in hemophilia patients. In November 2009, the FDA approved the oral form of TXA to treat menorrhagia

Summary of the evidence for use of TXA in Trauma:

Two main studies, CRASH-2 and MATTERS, provide the most compelling evidence for the use of TXA in trauma.

The CRASH 2 trial is one of the first large studies to show a significant mortality benefit with the early administration of TXA. It was a large pragmatic international randomized placebo-controlled trial of the effects of the early administration of TXA (1 g over 10 minutes intravenously administered, then an intravenous infusion of 1 g over 8 hours) on 28-day hospital mortality, vascular events, and transfusions in adult trauma patients. The trial enrolled > 20 000 patients from 274 hospitals across 40 countries who either had significant bleeding or were at risk of significant bleeding. 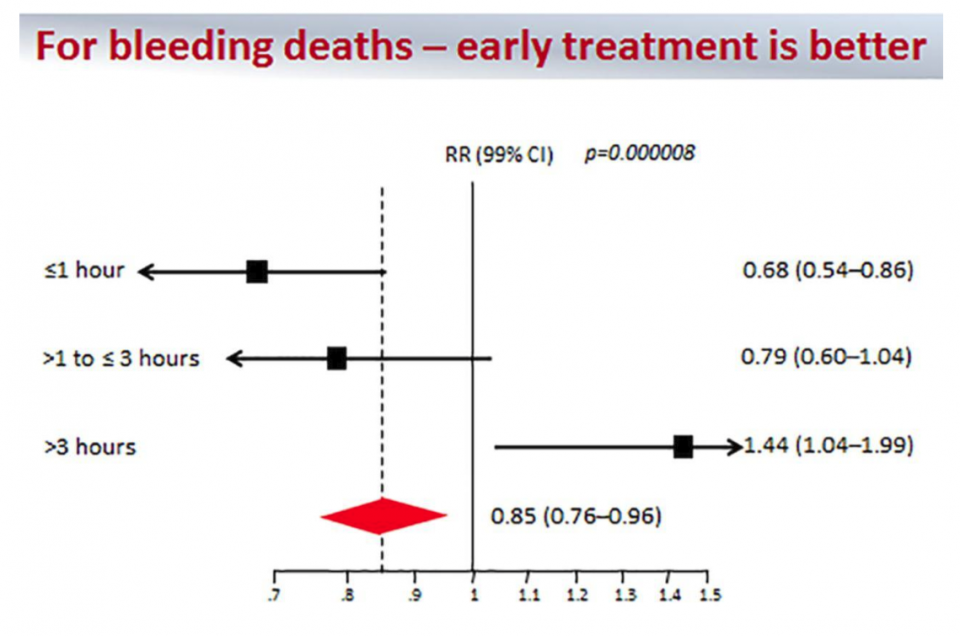 The MATTERS study was published in 2012 by Morrison and colleagues. This was a retrospective observational study comparing TXA to no TXA in combat casualty patients. There were a total of 896 trauma patients; and 293 received TXA. Trauma patients were identified from UK and US trauma registries and all patients were treated in a surgical hospital in southern Afghanistan. The primary end points were 24 hour, 48 hour, and in-hospital mortality.

The results from the MATTERS study showed that the TXA group had lower unadjusted mortality than the non-TXA group despite being more severely injured. This benefit was greatest in Massive Transfusion patients, where TXA was also independently associated with improved survival and less coagulopathy (OR, 7.228). Thrombotic events were significantly increased in the TXA group for both PE and DVT in the overall cohort and in the Massive Transfusion cohort. However, after correcting for severity of injury, there was no association of TXA use with an increased risk of DVT or PE.

Bottom Line from the MATTERS study:

A meta-analysis published in the Lancet in 2018 assessed anti-fibrinolytics in acute, severe bleeding. The investigators obtained data from more than 40,000 patients from two randomized trials of TXA in acute severe bleeding from trauma and PPH.

Overall the results showed that: 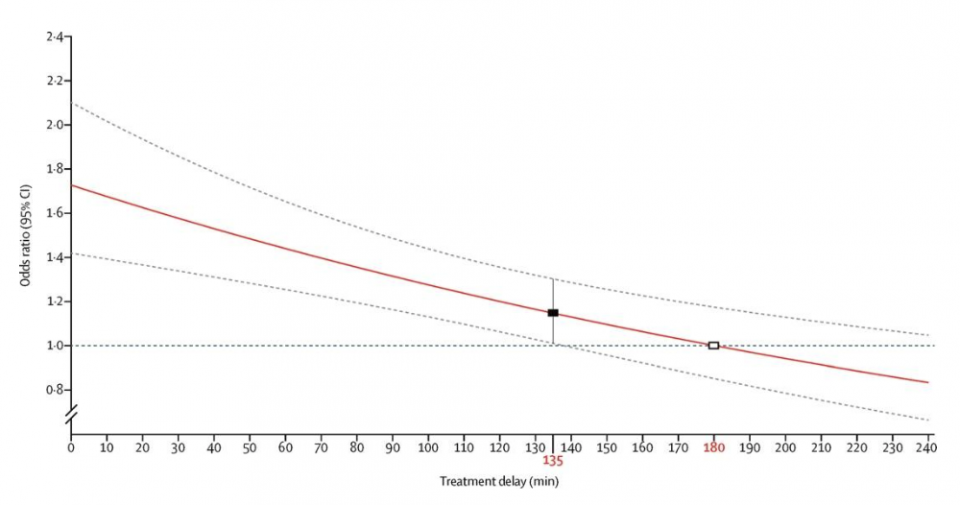 Figure: The red line shows the best fitted model for the association between the protective effect of TXA (odds ratio for not dying from bleeding) and the duration of treatment delay in minutes. The white square shows the timepoint at which the model estimates a null effect of tranexamic acid (a treatment delay of 180 min).

Bottom Line for the use of TXA in Trauma

Evidence for use of Ketamine for Excited Delirium in a pre-hospital setting:

There is good evidence to suggest that transporting OHCA patients by EMS directly to a specialist cardiac arrest center is associated with improved outcomes. The Ottawa ROSC bypass protocol (presented below) goes into effect on May 16, 2018. 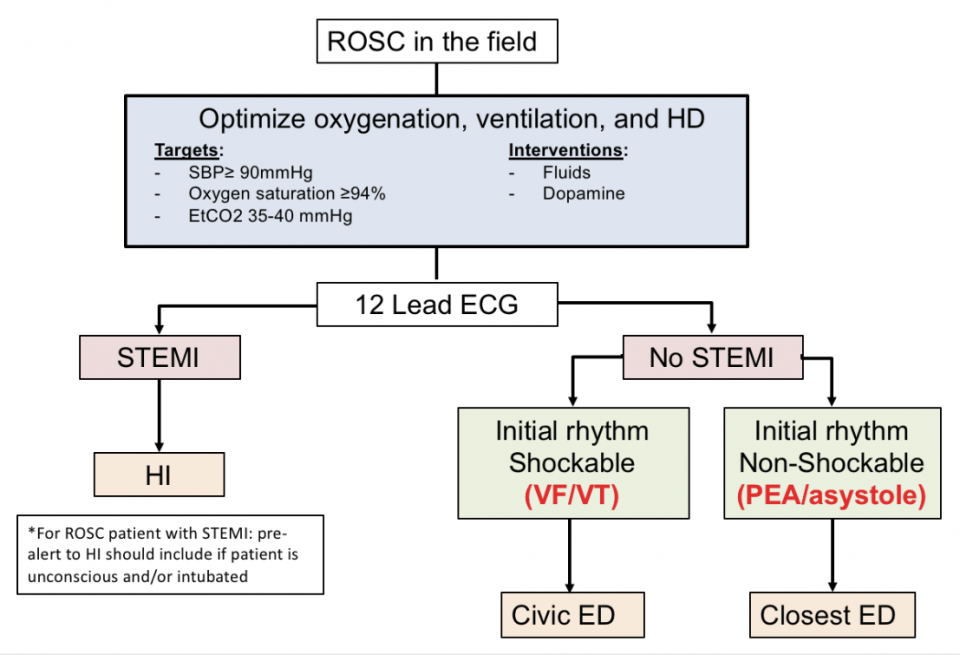 Exclusions to the ROSC bypass include 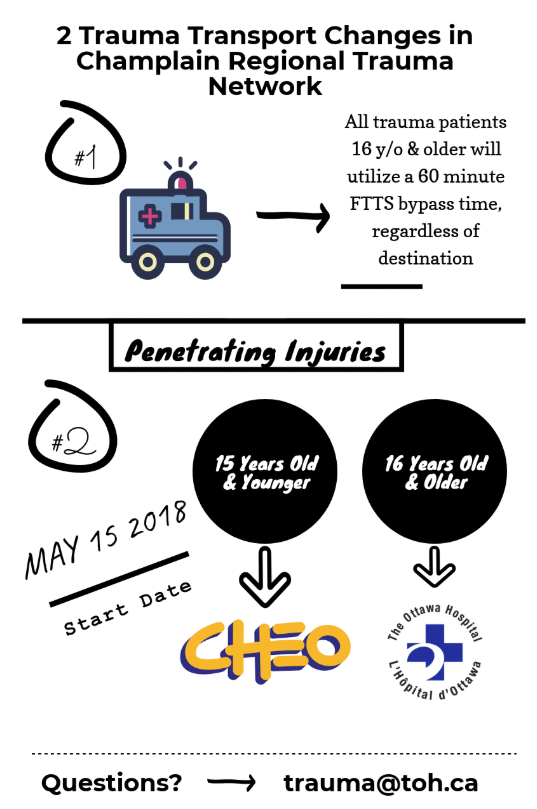 Care of the Birthing patient