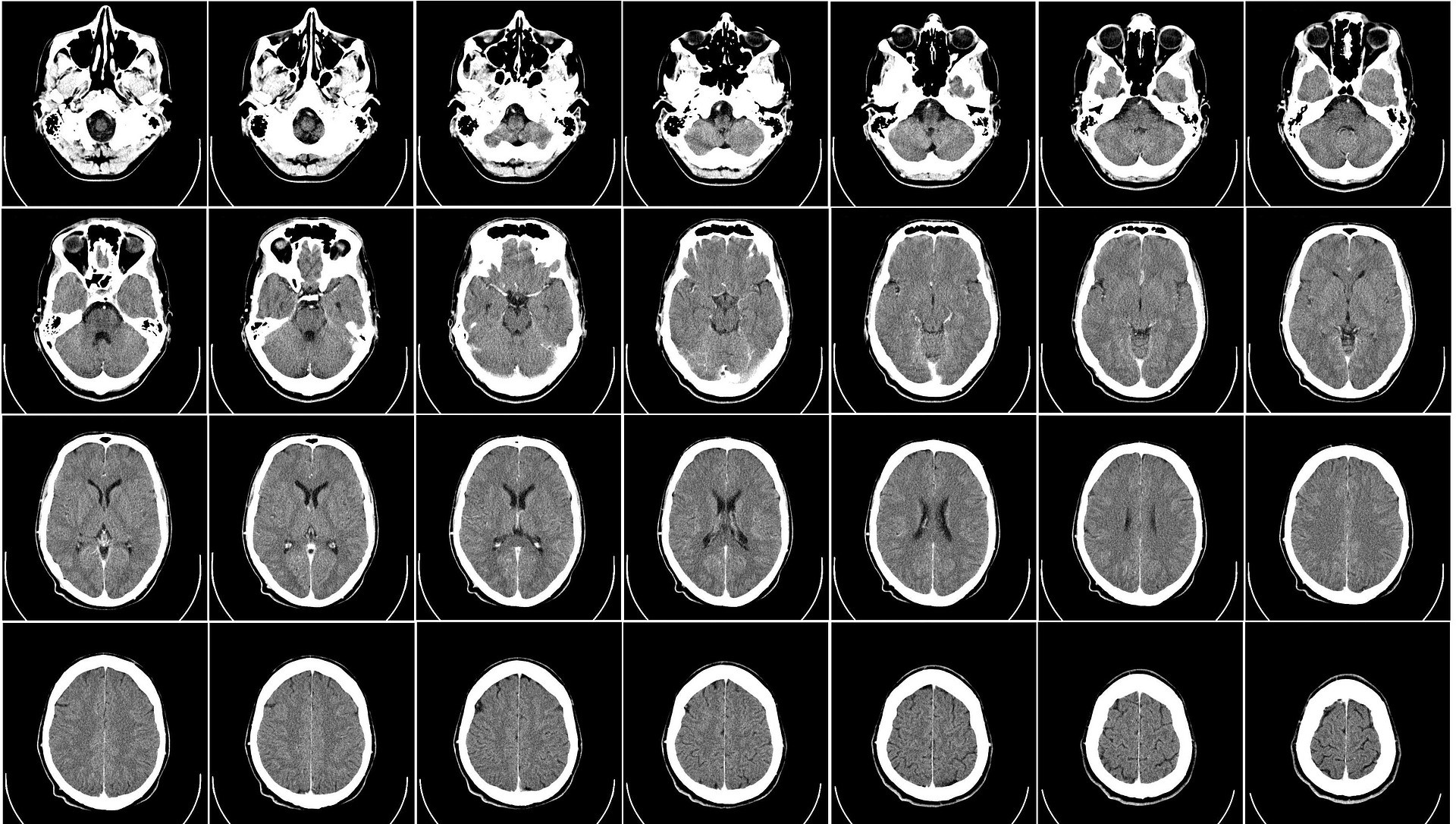 Most clinicians are familiar with and utilize the Glasgow Coma Scale (GCS) on a daily basis, but many are not aware of the updates and additions to the score that were made in 2014 and 2018, respectively. Clarifications in the wording of the scale attempt to increase the ease of use and inter-rater reliability, while the addition of pupil examination and CT findings seek to increase prognostic accuracy. This post highlights these updates and the data supporting them. 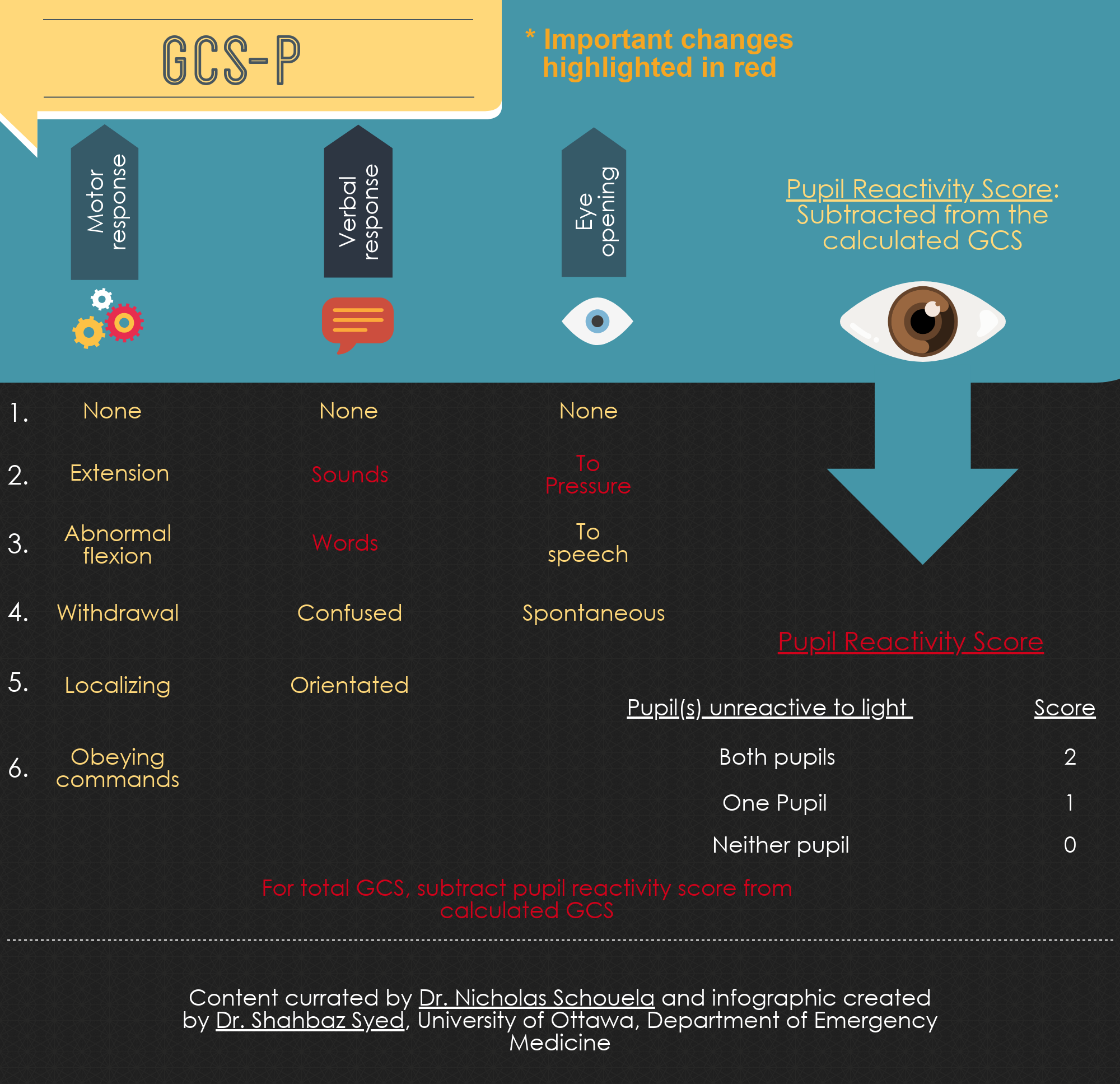 The GCS, developed by Prof. Graham Teasdale in 1974, was designed to quantify level of consciousness in the brain injured patient1. Since its inception it has evolved from a 14-point scale to the modern 15-point scale and has become an integral part of the assessment of and prognostication for altered mental status patients across the world2. It was adopted in the 1st edition of ATLS in 19803 and continues to be included in its more modern form in the 10th edition of ATLS.

The original components of the GCS were as follows:

This edition of the GCS scale is the one that most people are aware of. However, on the 40th anniversary of the scale, it underwent an update to terminology with the goal to simplify the language used2. That version of the GCS is as follows (changes are highlighted).

In the new 2014 version, scores are tabulated as previous with a combined score from 3 to 15 and individual scores. However, in the case of a non-testable aspect, the new GCS should only be noted in its components. Here is an example:

42 year old man, intubated after traumatic brain injury (TBI) for decreasing GCS. Currently, he opens his eyes to pressure, is intubated, and withdraws his left arm and leg to pain.

2014 – GCS: E 2, V NT, M 4. It is no longer recommend to assign 1 point to non-testable elements, therefore a combined score should not be used here as it would imply that the patient is more unwell than they really are. Any element that cannot be tested should be marked as NT, for “not testable”4.

Prof. Teasdale was not finished however. The ability to prognosticate based on initial presentation is important for both downstream management of the injured patient as well as to help guide goals of care discussions. As a result, this year a new paper was published calling for the adoption of the GCS-P score. The GCS-P is scored from 1 to 15 and is calculated by subtracting a pupil reactivity score (PRS) from the calculated GCS.

Here is a case example:

37 year old female with a traumatic subarachnoid hemorrhage (SAH). On presentation to the ED, she does not open her eyes, she moans, and displays abnormal flexion in her limbs to pain. On examination of her pupils they are both fixed and dilated.

According to pooled data from CRASH and IMPACT trials used to derive the score, a GCS of 6 carries a 6-month mortality of 28.82%. However, patients with a GCS of 6 and bilateral fixed pupils (GCS-P = 4) have a 6-month mortality of 42.94%5.  The addition of a pupil examination appears to allow clinicians to prognosticate outcomes better than GCS alone and can be done quickly and easily at the bedside. 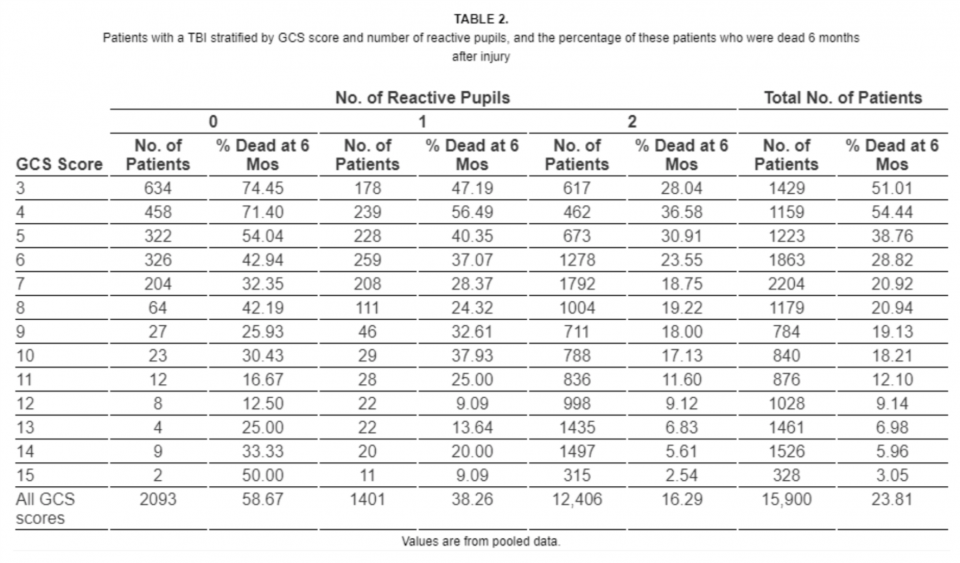 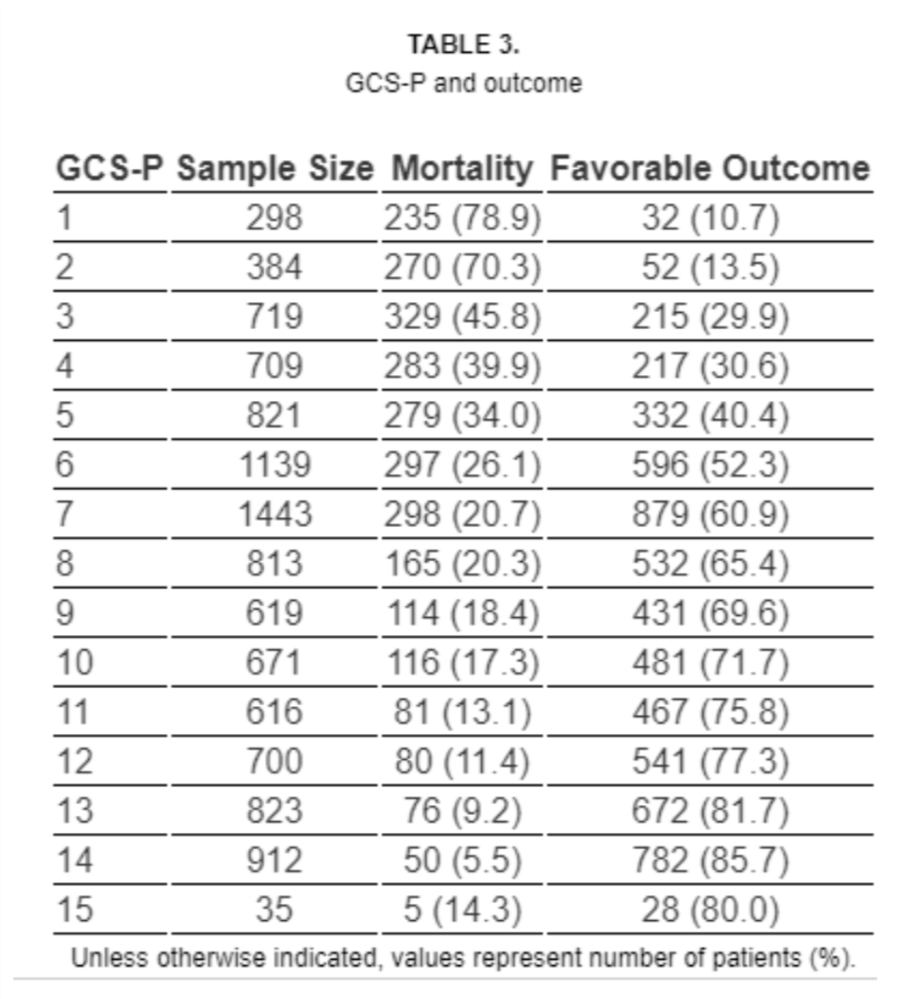 Table of calculated GCS-P score and corresponding mortality and outcomes6

The study authors took this one step further by combining the most predictive factors for mortality and unfavorable outcomes in TBI. They incorporated age and CT findings with GCS-P and created GCS-PA CT (GCS, pupils, age, and CT findings).5 While potentially useful from a prognostic standpoint, this is not as easily applied at the bedside and requires a chart to interpret. Due to ease of use, the GCS-P appears more likely to be readily adopted than the more cumbersome GCS-PA CT. 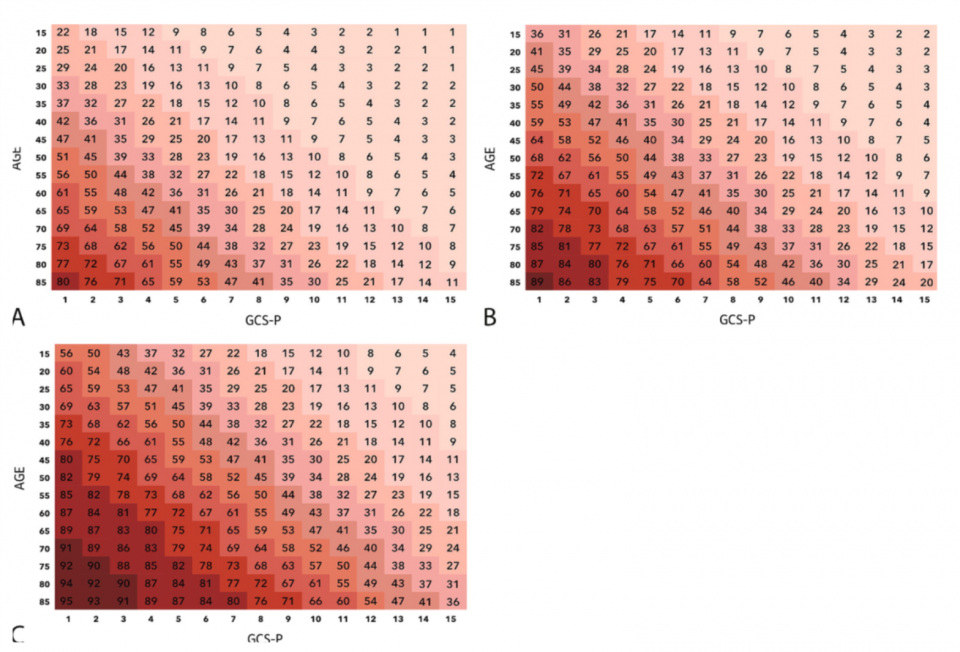