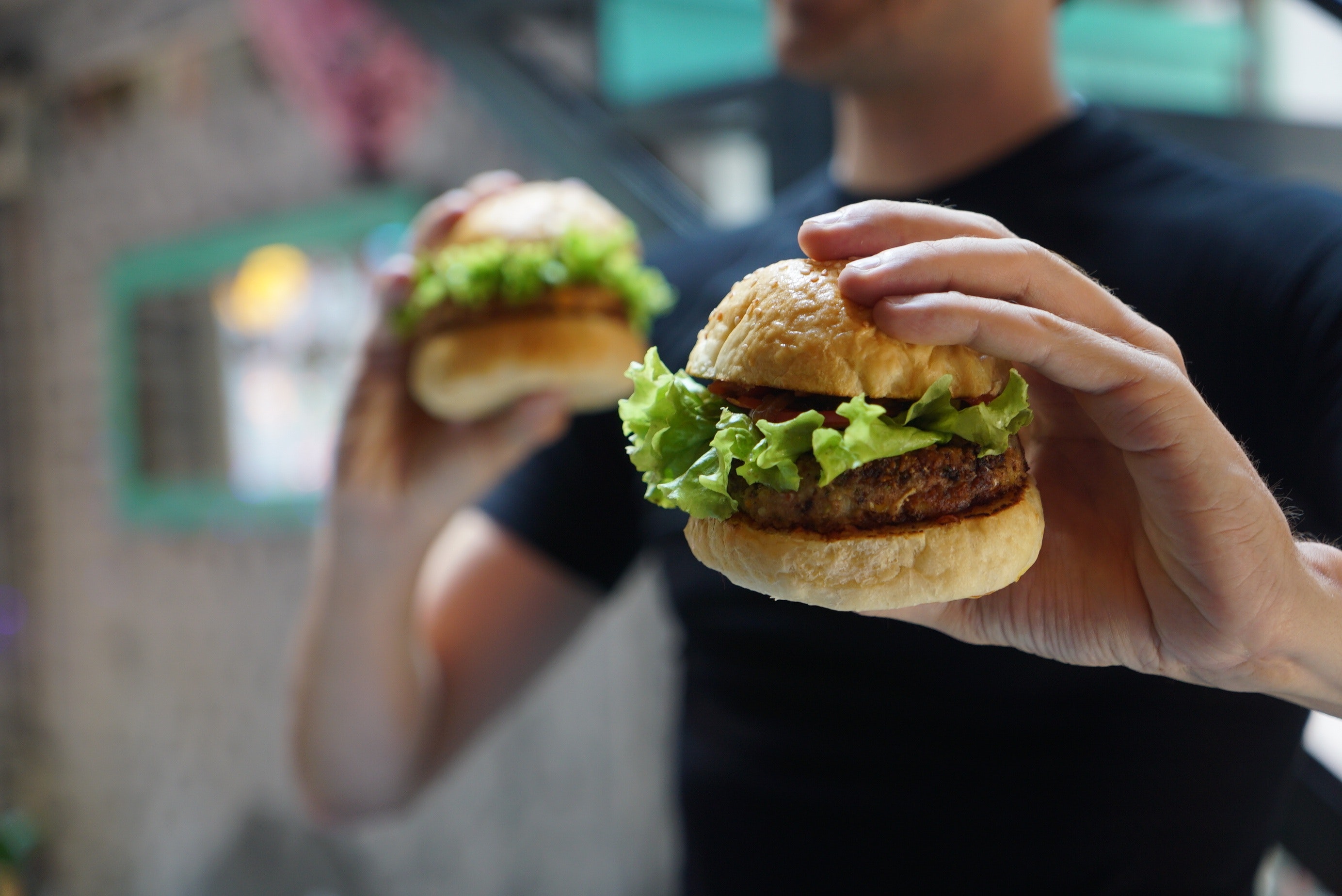 Procedural sedation is commonly performed in the Emergency Department. It is a critical tool that helps facilitate unpleasant but often necessary procedures that our patients would otherwise not tolerate.

However, procedural sedation is also an extraordinarily resource-intensive endeavor. Most often, it requires cardiac monitoring and many interprofessional personnel. Also, despite its frequent use, it is an area where there is significant practice variation and many controversies.

In this post, the first in a two-part series, we will delve into these controversies regarding procedural sedation and explore how to reduce resource utilization and ED length of stay. To illustrate these points, let’s begin with a case.

In PART 1, we will discuss the need for fasting prior to ED procedural sedations.

In PART 2, we will review the safety profile and adverse event rates of Ketamine and Propofol – two commonly used agents in procedural sedation. We will subsequently explore whether agent choice affects sedation time and ED LOS.

Aspiration during Sedation – How common is it?

Historical data from the 1960-1980’s suggested rates of aspiration as high as:

However, contemporary data suggest that true rates of aspiration in patients undergoing general anesthesia are closer to 0.7-10.2 cases per 10 0002.

Risk factors for aspiration were described to be3:

Procedural sedation in the ED is very different compared to general anesthesia in the OR. There are fundamental difference that likely further reduce the rates of aspiration in our population.

In 2017, Green performed a systematic review looking at all reported cases of pulmonary aspiration during procedural sedation outside the OR4:

Fasting Prior to Procedural Sedation – The Guidelines

Traditionally, it has been suggested that patients should meet fasting guidelines prior to procedural sedation. This teaching predominately comes from the ASA’s Practice Guideline for Sedation and Analgesia by Non-Anesthesiologists published in 2002 (and earlier iterations).

It suggested that our patients should meet the following fasting guidelines prior to procedural sedation5,6:

They state that for urgent/emergent situations, we should consider lighter sedation or intubation in patients who have not met fasting guidelines.

Continuing with our case, the patient may not tolerate adequate reduction of an unstable orthopedic injury with lighter sedation and intubation in the ED to facilitate this seems excessive.

Interestingly, within the guideline paper itself, the ASA notes that:

The literature does not provide sufficient evidence to test the hypothesis that preprocedure fasting results in a decreased incidence of adverse outcomes in patients undergoing either moderate or deep sedation.5

Since 2002, various other guiding agencies have put out statements on procedural sedation that advocate for less restrictive fasting guidelines.

As noted in table above, our guiding agency, the American College of Emergency Physicians (ACEP), released a Clinical Policy & Position Paper in 2014 which recommended the following8:

Fasting Prior to Procedural Sedation – Review of Recent Literature

Had 10 cases of aspiration

This is a study with a huge population size. However, it is not solely an ED-based study. In fact, 58.0% of their patient cohort was sedated for MRI/CT – not typical of reasons we would be sedating for in the ED.

So what does contemporary ED literature show?

Prospective observational study at 8 hospitals in the Netherlands

Regardless of fasting time, no aspiration events were noted.

Over 50% of their patient cohort did not meet fasting criteria

NO ASPIRATIONS REGARDLESS OF FASTING STATUS

They also showed that duration of fasting had no effect on rate of adverse events.

There is a wealth of literature looking at the relationship between fasting and rates of aspiration in ED sedations. Below is a summary of results from studies since 2000: 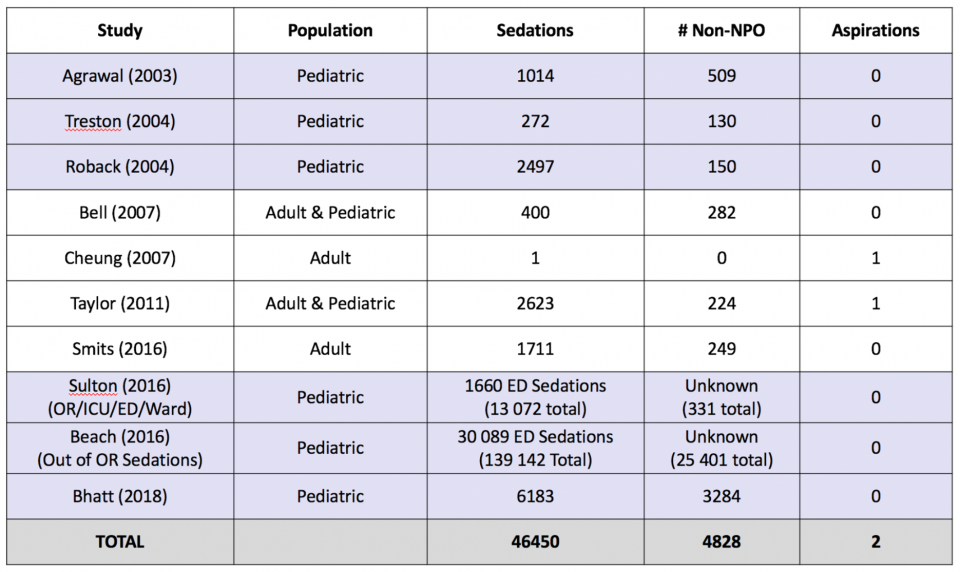 In approximately 46 500 ED based procedural sedations described in the recent literature, >4800 of which were performed in patients who had not met fasting criteria, there were only 2 reported cases of aspiration11–20; both of these were in adults who had met fasting guidelines.

In fact, in the Pediatric literature, there have never been any reported cases of pulmonary aspiration in children undergoing parenteral sedation in the ED setting despite widespread non-adherence with fasting guidelines.

Adherence to fasting guidelines is unnecessary in healthy patients undergoing procedural sedation in the ED. Aspiration is an incredibly rare event in ED sedations.

ACEP’s Clinical Policy on Procedural Sedation in the ED recommends that we do not delay procedural sedation based on fasting time alone and a review of the existing literature supports this recommendation. There is no evidence that preprocedural fasting reduces rates of adverse events including aspiration.

We are taught to consider the adverse events related to sedating non-fasted patients, but rarely do we think about the downsides of delaying an important procedure. Fasting increases our patients’ length of stay in the Emergency Department. Furthermore, delaying procedures leaves patients in pain/discomfort longer, requiring more opioid analgesia as they wait, and potentially makes the procedure more difficult (e.g. dislocations become more difficult to reduce with time, atrial fibrillation can become more difficult to cardiovert the longer patients are in it, etc.).

The vast majority of recommendations presented above come from data derived from studies of healthy (ASA I & II) patients.  There is insufficient data in the literature exploring the relationship between rates of adverse events and fasting duration in high ASA class patients. This is an area that requires further research.

Furthermore, it has been shown that certain procedures such as EGD and bronchoscopy are associated with higher rates of adverse events4.

Thus, we should consider the following risk factors and adjust our sedation strategy accordingly: