Life in the balance: Why fluid choice matters in the Emergency Department 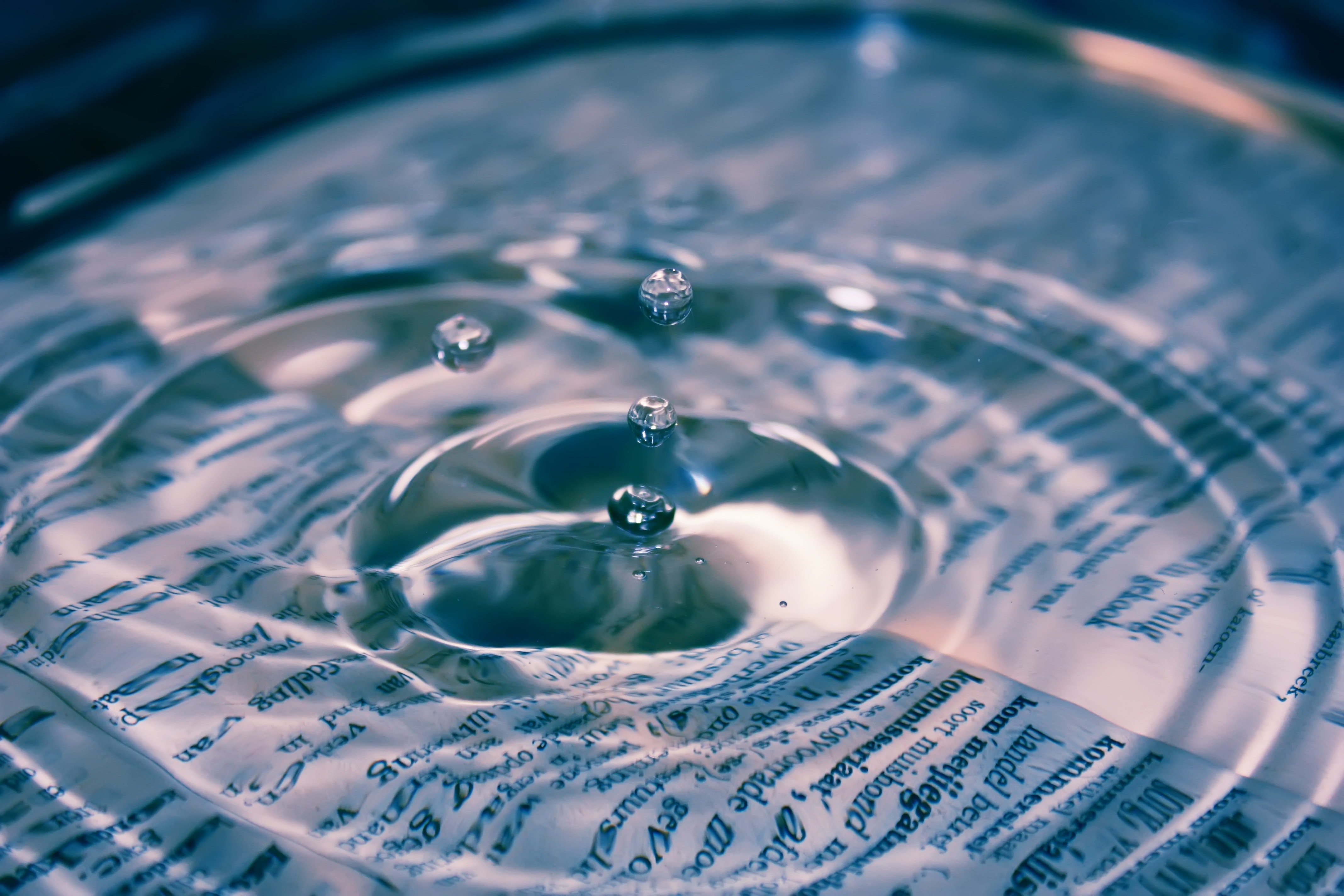 IV fluid is a drug

Intravenous fluid administration is the second most common medical intervention next to supplemental oxygen.1  Over 200 million liters of normal saline (NS) is used in the United States annually.2 Intravenous fluids, like any other drug, should be given with thought and knowledge about the effects and sequelae to your patient.

The origin of IV fluids

The earliest reported use of IV fluid dates back to 1832 during the cholera pandemic in England.  A British physician named Thomas Latta noticed that “injecting a weak saline solution into the veins of the patient had the most wonderful and satisfactory effect.”3  He used a solution that was composed of “two drams of muriate of soda and two scruples of subcarbonate of soda in six pints of water.”4  Since 1832, many versions of salt solutions were created for intravenous therapy.

Where did normal saline come from?

The first reported use of the term “normal saline” was in 1888.  The solution it was referring to did not resemble 0.9% saline.  It is speculated that “normal saline” was used as colloquialism at the time with no scientific basis.  The first reported use of 0.9% saline was in 1896.  The justification for its use was based on experiments done by a Dutch physiologist named Hartog Jakob Hamburger.  Hamburger did experiments examining the lysis of erythrocytes in solutions with different concentrations of saline.  He found that a 0.9% saline solution resulted in the least amount of cell lysis, concluding that 0.9% saline was isotonic to human serum.  The scientific evidence supporting the use of 0.9% saline in clinical practice seems to be based solely on this in vitro study.4

To understand the effects of NS, we need to use the physicochemical theory of acid-base created by Canadian physiologist Peter Stewart.5,6  One of the underlying principles on which Stewart’s theory is based is electroneutrality, which means that positive and negative charges are always balanced.

The predominant positive charge in our body is sodium, and the predominant negative charge is chloride.  The difference between sodium and chloride is also known as the strong ion difference (SID).  Strong ions are ions that dissolve readily in solution.  A normal SID is about 40, and the SID is directly related to the acid-base status.

There are also small amounts of other positive charges such as potassium, calcium, magnesium, and hydrogen ions, as well as other negative charges such as albumin, lactate, and bicarbonate.  Notably, Stewart’s theory states that hydrogen ions and bicarbonate ions are dependent variables, which means their concentrations vary depending on the concentrations of the other positive and negative charges.  When we give normal saline, a disproportionate amount of chloride is added. 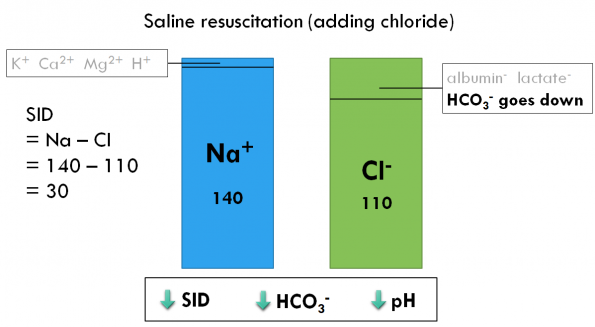 Why is hyperchloremic acidosis bad?

Numerous observational studies have shown that hyperchloremic acidosis is related to worse outcomes, including increased acute kidney injury and mortality.7–10  It has been shown that increased chloride concentrations in the renal tubules cause the release of adenosine from the macula densa, which causes afferent arteriolar resistance and reduced glomerular filtration.11

What is a balanced fluid?

A balanced fluid is one that will not disrupt the body’s normal pH.  A balanced solution has a SID that is similar to the physiologic SID of 40.  This type of fluid is created by adding a buffer such as lactate in lactated Ringer’s (LR), or gluconate and acetate in Plasmalyte.  Therefore, LR and Plasmalyte are balanced solutions whereas normal saline is not.  The composition, properties, and pricing for NS, LR, and Plasmalyte are shown below.1,3,12 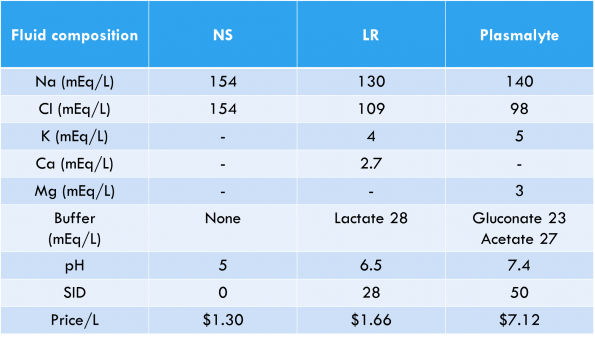 Why don’t we just use Lactated Ringer’s?

Two common reasons clinicians may hesitate to use LR are hyperkalemia and hyperlactatemia.  These common misconceptions are clarified below.

No study on this topic has ever demonstrated that LR significantly increases serum potassium.  This makes sense for two reasons.  First, the amount of potassium in LR (4 mEq/L) is negligible when distributed in the body.  Second, 98% of total body potassium is stored inside cells.  This means that the shift of potassium from intracellular to extracellular makes a much bigger impact on serum potassium than the 4 mEq/L of potassium in LR.  Normal saline, which we established as consistently causing acidosis, is actually worse in the setting of hyperkalemia.  The acidosis caused by NS will actually cause potassium to shift out of cells and cause an increase in serum potassium.  This is supported by randomized studies in the renal transplant literature, which consistently demonstrate higher serum potassium levels in patients after receiving NS compared to LR.13–16

Studies on this topic have shown that LR does increase serum lactate slightly.17  However, this increase in lactate is not clinically significant because it is not associated with acidosis.18 The lactate that we consider to be harmful is lactic acid, which dissociates into lactate and hydrogen ions, causing an acidosis.  The lactate in LR is sodium lactate, which dissociates into lactate and sodium, which means it will never cause an acidosis.  Lactate itself is not known to be clinically harmful.  In fact, lactate is metabolized by the liver and used by the body as an energy source.  Sodium lactate has been shown to increase cardiac output.19  Many clinicians use lactate to guide resuscitation and may be concerned that LR may have the potential to confound serum lactate levels.  Unless the patient has profound hepatic dysfunction, lactate is quickly metabolized by the liver and the increases in lactate caused by LR should be negligible.  Furthermore, the utility of lactate as a resuscitation marker is debatable and, ultimately, lactate should be just one of many data points a clinician uses to guide resuscitation.

When does fluid choice actually matter?

In a recent large randomized trial of noncritically ill emergency department patients, there was no difference in the primary outcome of hospital-free days between saline and balanced crystalloids.2  There was a statistically significant difference in the secondary composite outcome of major adverse kidney events within 30 days (MAKE-30) in favor of balanced crystalloids.  The composite outcome of MAKE-30 was composed of death, new renal-replacement therapy, and final creatinine ≥ 200% of baseline.  The difference in the composite outcome, however, was driven by doubling of the creatinine – making the clinical significance of this difference debatable.  While increases in creatinine are not desirable, the results of the SALT-ED trial suggest that for your average, non-critically ill patient who is getting just a liter of fluids, the fluid choice probably doesn’t matter that much. 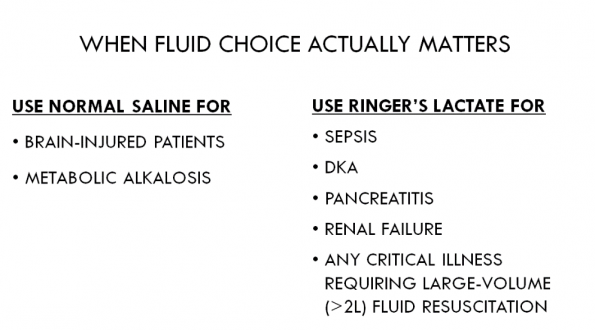 Patients with metabolic alkalosis from vomiting (such as infants with pyloric stenosis and patients with bulimia or other hyperemesis syndromes) should receive saline to replenish their chloride and counteract the alkalosis.

For a more in-depth review on the topic of Sepsis, please see Dr. Shannon Fernando’s Grand Rounds on the topic.

While the evidence for balanced fluids for patients with diabetic ketoacidosis has not shown differences in patient-oriented outcomes, it makes sense physiologically that they should receive balanced fluids.  Small studies have shown faster resolution of acidosis and less hyperchloremia for balanced fluids compared to saline.22–24

Studies have shown that patients with pancreatitis have faster resolution of SIRS at 24 hours and decreased mortality when they received balanced fluids compared to saline.25–27  The American College of Gastroenterology Guidelines also recommends LR as the preferred fluid for acute pancreatitis.28