Pneumothorax in the Emergency Department – Part 1 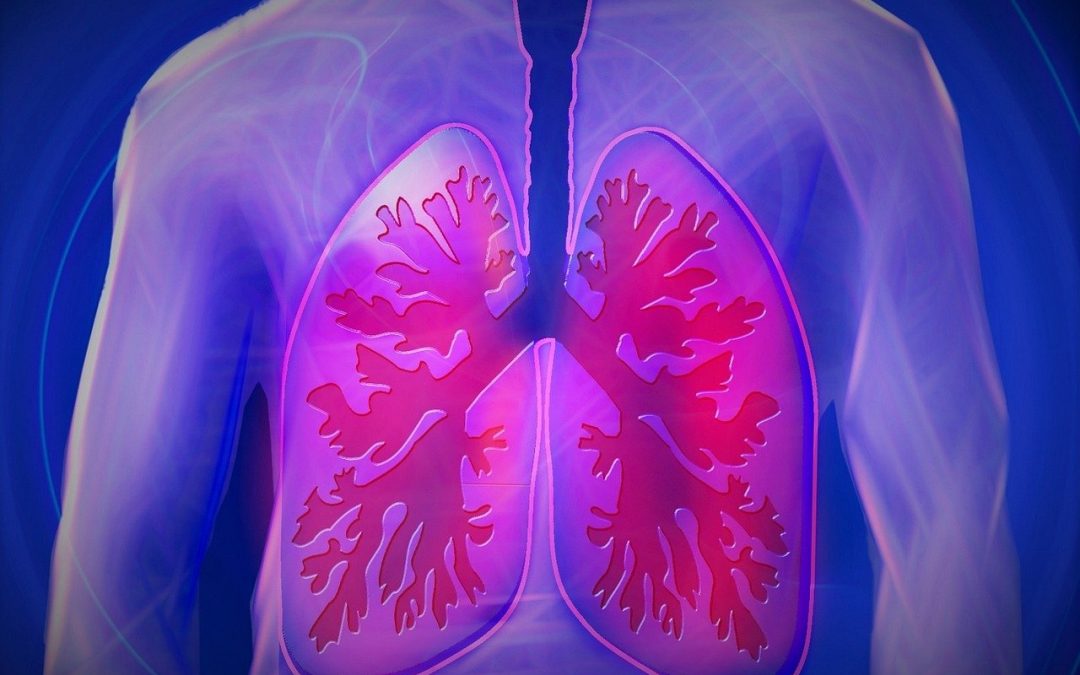 Pneumothorax is a relatively rare emergency department presentation with a number of controversies existing regarding its management. Over the last decade, the standard of care has shifted from invasive strategies to more conservation management approaches. What factors should you consider in managing the next pneumothorax you see on shift, and what do we really know from the existing evidence?

In part one of our two-part grand round series on pneumothorax, Dr. Simon Wells covers the varying definitions, epidemiology, diagnostic criteria, and imaging findings of pneumothorax including on point of care ultrasound (POCUS).

Part two of the series will focus on pneumothorax treatment and management options, as well as a summary of the 2020 NEJM publication ‘Conservative versus Interventional Treatment for Spontaneous Pneumothorax’. 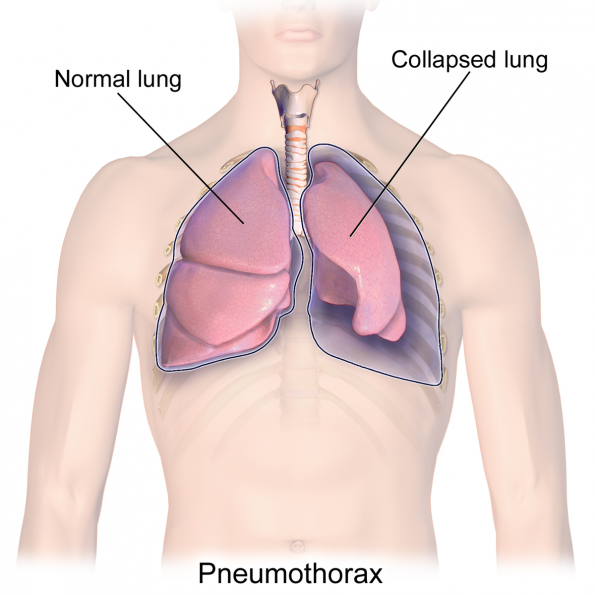 Pneumothorax refers to air in the pleural cavity. It was first described in medical literature in 1803 as a complication of tuberculosis infection.1 It was not until 1932 that the first case of “pneumothorax simple”, or pneumothorax in someone with no apparent underlying lung disease, was reported.2 This type of pneumothorax would come to be known as a primary spontaneous pneumothorax (PSP).

Secondary spontaneous pneumothorax (SSP) occurs in patients with clinically apparent underlying lung disease. They are both important to differentiate from traumatic pneumothoraces, which can be either iatrogenic or caused by blunt or penetrating traumatic injuries.

The concept of PSP occurring in patients with “no underlying lung disease” is traditionally taught, but this concept is in-fact outdated.3

Other risk factors for pneumothorax 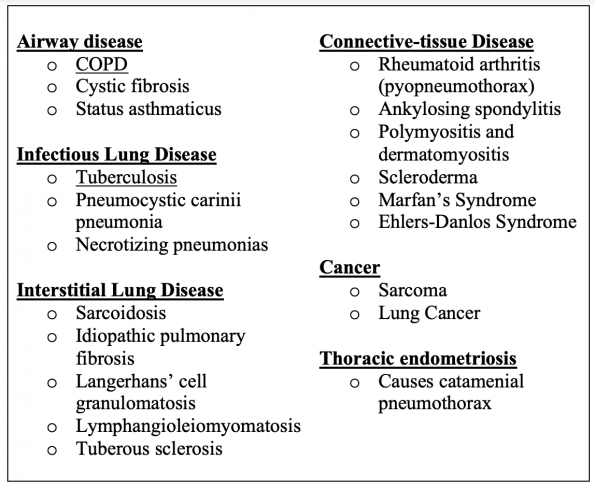 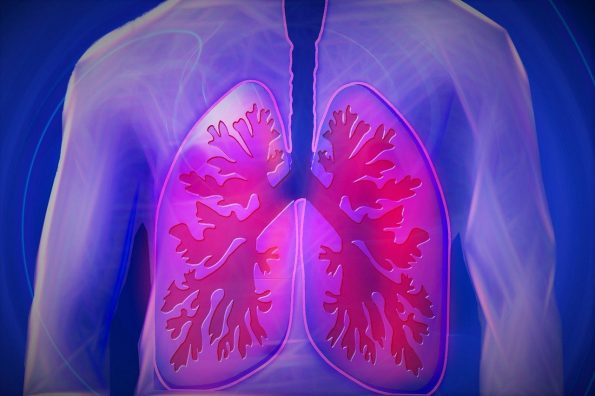 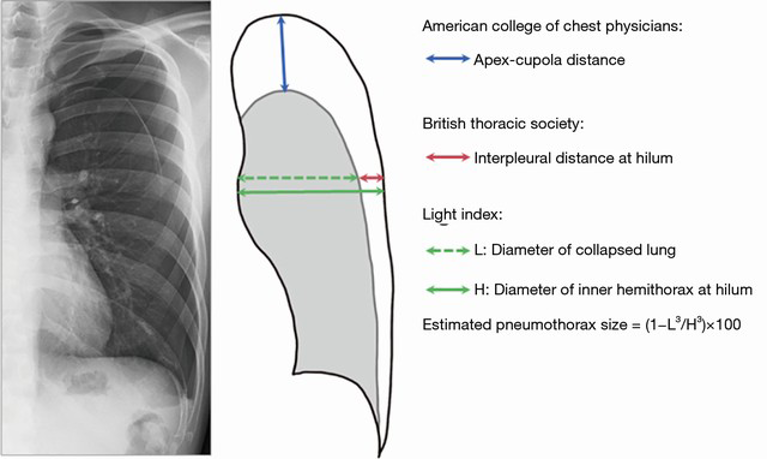 Overall however, neither of these methods is routinely used in clinical practice. Additionally, at present, it is reasonable to choose either the BTS or ACCP definition of large pneumothorax. 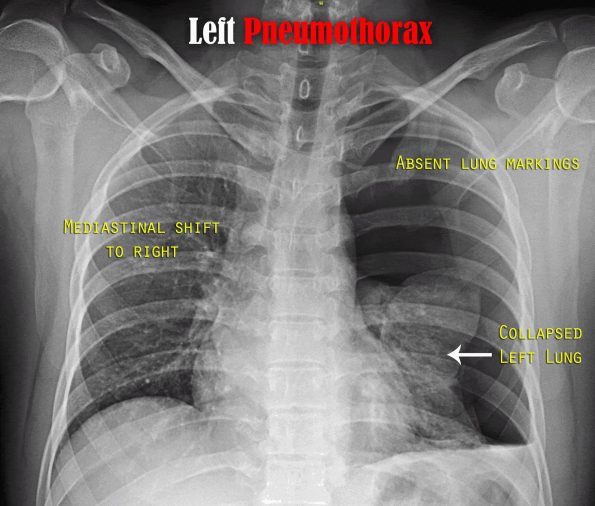 Signs of pneumothorax on supine x-rays 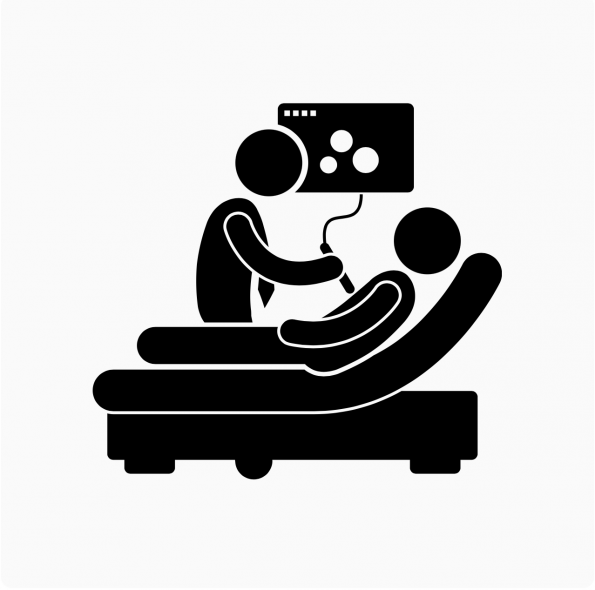 Check out this excellent video on POCUS assessment for pneumothorax from EM cases for more information:

In this post, we explored the varying definitions of pneumothorax, including whether a PSP truly occurs in the absence of any underlying lung disease. We discussed risk factors, including cannabis smoking, and the different sub-typing of pneumothorax described in the literature. Finally, we reviewed imaging findings of pneumothorax and POCUS clinical pearls to help sharpen your bedside skill-set.

Our next post, part two of the series, will focus on treatment and management options, as well as a summary of the 2020 NEJM publication entitled ‘Conservative versus Interventional Treatment for Spontaneous Pneumothorax’. Stay tuned!