CBRNE and HAZMAT: Be Prepared!

This post seeks to provide some insights and discussion around CBRNE events (Chemical, Biological, Radioactive, Nuclear and Explosive). We want to review procedures within a mass casualty CBRNE event, principles related to decontamination, PEE, and review the management of potential chemical agents.

Refers to incidents where patients are exposed to chemical, biological, radiological, nuclear, explosive or hazardous material either intentionally or accidentally. The nature of these incidents often results in multiple people being exposed to the agent or there being concurrent trauma.

These events all carry with it a higher mortality and morbidity than the isolated trauma associated with the incident. Be it through direct physiological consequences of the agents or, more likely, through delays in treatment. There may also be secondary increase in mortality and morbidity to those that are not involved in the incident itself due to diversion of resources. 1–3

A substance which is intended in military operations to kill, seriously injure, or incapacitate persons through its physiological effect.

A biological agent that is deliberately used to produce a disease or death in a person. This may be due to a bacteria exposure or toxin mediated.

The exposure to radiation or radioactive material, whether deliberately or indeliberate. This may be through a explosive device or other means such as topical/ingestion/inhalation.

A complete assembly with its intended configuration, upon completion of the prescribed arming, fusing and firing sequence, is capable of producing the intended nuclear reaction and release of energy. Cause a mix of trauma (thermal/blast/penetrating/blunt injuries) and radiation casualties.

Toxic industrial materials, or potential biological agents, such as laboratory.

This is a topic that we as emergency physicians should be the experts in managing, as we will be on the frontline receiving the patients when these events occur. Yet, research has shown that most emergency physicians are not comfortable with the processes at their facilities. As a result, this may also influence staff’s willingness to assist when a CBRNE event occurs4–6.

CBRNE Events in the Last 50 years

Whilst it is rare for emergency medicine physicians to have a CBRNE occur in their career, they do occur. Examples of these events in the last 50 years includes7–9:

Recognition of a CBRNE incident is generally through the recognition of relevant toxidromes or symptoms. Other clues that may point to a potential event include2,3:

First responders may use “CRESS” assessment in the field to quickly identify rapid onset toxidromes or mimics. An advantage of this system is that it requires examination of the chest and head, allowing for minimal exposure in a potentially contaminated space. 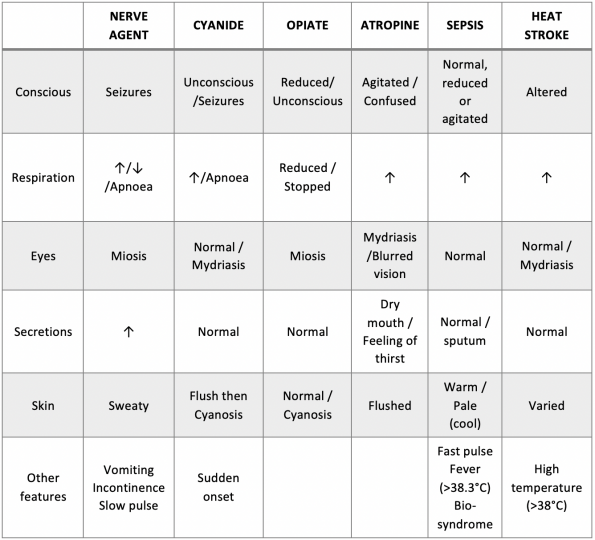 Recognition however may be delayed as some agents have a significant latency. Chemical and biological toxins will tend to present earlier, whilst biological agents may present days to months after the initial event, make the original exposure hard to identify1. Latency associated with radiation exposure is inversely proportional to the dose received10. 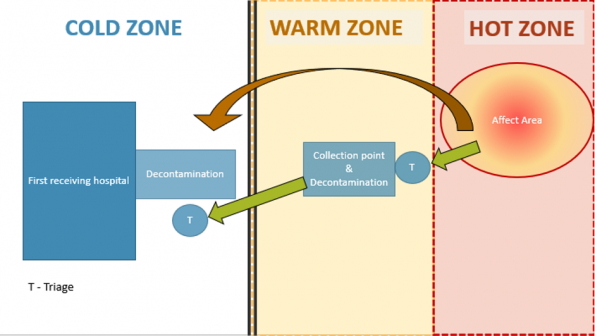 In the community, the area would be cordoned off and different zones would be established. These zones reflect the area of effect and contamination from the agent. This may be a mobile cordon that would be influenced by the wind direction and weather.

At the border between each zone a triage is present. This serves as a point of contact to reassess the patients as they are evacuated out of the affected area (Green Arrow). It also serves as a contact point where first aid and life preserving treatment can be provided. In the warm zone, a forward medical team can be deployed to provide initial management of patients.

Of note, the first receiver location has a second decontamination point. This is because of the likelihood of casualties arriving by other means (brown arrow) is high which puts the first receiving location at risk of becoming contaminated.

In the case of a potential mass casualty, each hospital should have an emergency plan in place. An example of steps involved in the response to a mass casualty event would be:

STD3’s is a method of remembering the important preparations required for a potential disaster event. It involves 3 elements within each letter to consider. S for Staff, Stuff, Space. T for Triage, Treatment, Transport. D for Decant, Deflect, Defer.

The degree of PPE is dependent on the proximity of the personnel to the site of exposure, with higher risk of potential exposure and the agent that is present. Level A being the highest level of protection with encapsulated self-contained breathing apparatus, chemical resistant, and boots. This is most frequently for those in the hot zone where the agent is potentially vaporised.

Level C is typically the level of protection for those in the medical centre providing medical assistance to those who may be contaminated. Responders wear a chemical resistant suit with a air particle respirator and 2 pairs of chemical resistant gloves.

PPE is not without its drawbacks. Firstly, there is a limitation to SCBA systems with O2 canister replacement being needed 20-30mins. Secondly, providers are at increased risk of heat related illnesses given the impervious nature of the suits.

Finally, the level of protection may decrease the dexterous ability of the provider. Some studies have suggested that drawing up drugs, intubation time and even IO insertion may be impaired, though this is still controversial13–18. Nor is it certain that new technology such as video laryngoscopy reduces the impairment. Even performing chest compressions have been found that there to be impaired with a significant decrease in the percentage of effective compressions and increased fatigue in HCW with level C PPE19.

Decontamination occurs at 2 sites – either the casualty collection point in the warm zone or the forward triage area in front of the first receiver hospital. There is the risk that patients may arrive via other means and as such will not be appropriately decontaminated prior to the arrival to the hospital2,11,20.

All casualties in the hot zone should be considered likely contaminated. The need for decontamination is dependent on the chemical exposure, and symptoms. Those agents with high volatility (low H Evap) on the skin are likely to have evaporated in a short period of time and as such may not need decontamination if the patient is asymptomatic.

This is a CRITICAL step. Where able, the clothes should be cut, starting with headwear, moving to the shirt and pants disrobing away from the head and face. The time taken to disrobe markedly decreases the exposure of the patient to the agent. However, the effectiveness of disrobing exponentially decreases over time. When removed quickly, this can effectively, according to some studies, remove 80-90% of all contaminants2,3,11,21.

Often thicker outer clothes will absorb liquids that are aerosolized. Which will increase the concentration on the skins and prolong the exposure to the patient and increasing the likelihood of dermal absorption. It also poses a risk to first responders, as it may result in a phenomenon known as “off gassing” – as the agent evaporates, first responders become affected20,22. This phenomenon resulted in 13 EM doctors being symptomatic in the 1995 Sarin attacks in Japan.

The use an absorbent material is used to blot and wipe away from the mouth and nares any material on the face. This has been suggested, by Chilcott et al,  to be as effective as wet decontamination in ambulatory cases except in the cases of caustic or powdered materials23.

Use of water to dilute the agent, provided in a soft pressure (50-60psi) high volume method. This is most effective in low volatility agents. Wet decontamination occurs either through a tent set up or a make shift shower in a ladder hose system if mass casualty decontamination is required.

This is usually followed by a technical decontamination where trained specialists then irrigate the patient +/- soap to complete the decontamination. The entire process can take 15mins. However, safe emergency decontamination can be effectively done in 3 mins.

A study by Chilcott suggested that a combination of both wet and dry decontamination leads to 96% efficiency in people that are compliant22–24.

Wounds should be thoroughly irrigated and examined for foreign bodies which should removed if removal would not cause significant bleeding risk to the patient.

Irritants are typically chemicals that cause inflammation of the area where contact is made through acid or alkali radical formation. Gaseous irritants frequently cause irritation of the respiratory tract on exposure. Those with high solubility in water (HCL, Chlorine, ammonia) tend to cause upper airway toxicity and symptoms such as burning sensation of the upper airways and eyes with the potential for upper airway edema forming.

Irritants such as phosgene and nitrogen dioxide have lower water soluble co-efficient and as such tend to affect the lower respiratory tract. Acute respiratory distress syndrome may result. Symptom onset may be delayed for upto 12 hours.

A group of irritants that may frequently be encountered are the riot control agents such as: Chloroacetaophenone (Mace), Chlorobenzylidene-malonitrile (Tear gas), Dibenzoxazepine (CR), Oleoresin Capsicum (Pepper Spray). In general, these have similar symptoms to high water solubility agents and are treated similarly.

Lipophilic agents that inhibit Acetylcholine esterase in the synapse resulting in increased acetylcholine concentrations leading to a cholinergic toxidrome. Acute exposure results in combination of muscarinic receptor and nicotinic symptoms, the symptoms of which are remembered by the mnemonics “DUMBBBELS” and “Days of the week” respectively. Nervous system involvement is common early in presentations and paralysis resulting in respiratory failure can occur in the acute presentation. Symptoms of other systems can occur but tend to present later including ventricular dysrhythmias, delayed peripheral neuropathies, pancreatitis, hypotension.

Treatment involves supportive care and antidote administration. The antidote for organophosphates and carbamates is atropine and oximes.

Atropine dosing is 2mg, with doubled dosing given every 5 mins until pulmonary secretions are dried. An atropine infusion can then be commenced.  Glycopyrrolate can also be considered to counter muscarinic effects.

Seizures are treated with benzodiazepines.

The response to oximes is dependent on the size of the side chain in the organophosphate. Those organophosphates with shorter side chains are more responsive to early oxime administration however, may not be responsive if given later due to the increased rates of irreversible covalent binding with AChE in these agents. It should be noted that carbamates only form reversible bonds and typically only last 24-48hours.

All asphyxiants work through the prevention of O2 and CO2 exchange and transportation. The agents are grouped into simple asphyxiants and systemic asphyxiants. The latter group can further be broken down into oxidative phosphorylation inhibitors and oxygen transport inhibitors.

Oxygen transport inhibitors, prevent O2 binding and delivery to the cells. The most common examples of which would be CO which has a higher affinity to Fe2+ than O2 preventing binding or methemeglobin inducers which oxidise the Fe2+ to Fe 3+ preventing O2 binding.

Oxidative phosphorylation inhibitors work at a cellular level by inhibiting the electron transport across the mitochondrial membrane preventing generation of ATP.

On investigations, co-oximetry and VBG can be used to detect elevated methemoglobin and carboxyhemoglobin levels (>3-5% non-smoker, >10% Smoker). Saturations with pulse oximetry may be falsely elevated in CO exposure, methemoglobinemia and cyanogenic agent exposure. However, in cyanogenic agents arterialisation of a VBG will occur which is reflective of the inhibition the oxidative phosphorylation pathway. Elevated lactate is also commonly seen as well in these agents due to the cellular inhibition of aerobic metabolism. In a small retrospective clinical study (11 patients) , a lactate >8 in a suspected pure cyanogenic intoxication was found to have a sensitivity of 94% and specificity of 70% for a toxic serum cyanide level 2,29.