A Bloody Mess: an Update on UGIB Management in the ED

Acute upper gastrointestinal bleeding (UGIB) is an all-too-frequent presentation that can scare the pants off of even the most seasoned Emergency Physician.  Severity of presentation can vary greatly, from simple bleeds related to gastritis to exsanguinating variceal bleeds.

Common etiologies of UGIB, with frequency in parentheses, include (1):

Initial assessment of all patients with GI bleeding should, as expected, start with ABC’s. After this, one needs to determine whether the bleeding is coming from an upper or lower source. As a caveat, if the bleeding is life-threatening, then the classic question of source is unimportant and should be assumed to be upper; UGIBs are more prevalent and are usually associated with increased morbidity and mortality.

They also found that the following factors were predictive of severe UGIB requiring urgent EGD:

But wait, they used NG lavage in their assessment of patients? Is this something we should all be doing?

Although a 2004 retrospective Canadian registry (3) found NG lavage was being performed in up to 28% of patients with suspected UGIB, it is painful for patients and not useful to either “rule in” severe bleeding or rule out the presence of an UGIB requiring urgent intervention. NG aspiration still misses >15% of high-risk lesions and does not influence patient outcomes (4).  Hence, there isno role for NG aspiration in the initial assessment.Ultimately, Emergency Physicians should be relying on the bleeding presentation, patient history, and physical exam to determine the source of bleeding. To assess severity of bleeding, Emergency Physicians should focus on risk stratification using validated scores.

Both the American College of Gastroenterology (ACG) and European Society of Gastrointestinal Endoscopy (ESGE) guidelines (5, 6) for managing UGIB recommend using predictive scores for early risk stratification of these patients. However, from a survey of GI/ED/IM staff and residents published in 2013, only 53% had heard of an UGIB risk score, and only 30% of respondents were using them (7).

These risk scores can help triage patients to assist in decisions such as the timing of endoscopy and discharge planning. I won’t discuss the Rockall Score (8), the original score developed, as it is inferior to the GBS and AIMS65 scores.

Regarding these clinical scores, I would recommend, “use them”. They can assist in the early disposition of UGIB patients as well as potentially assist in getting our GI colleagues to assess and scope patients with higher scores earlier on. Patients with a GBS of 0-1 can be safely discharged home from the ED without early endoscopy, and ESGE guidelines currently support this practice (6). This would allow for up to 16-25% of UGIB patients to be discharged without an ED GI consult. 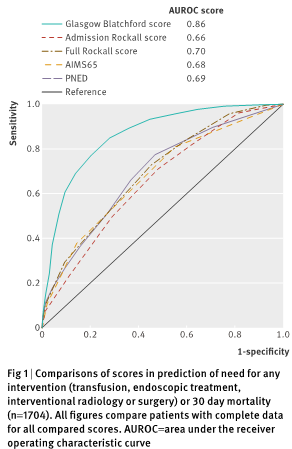 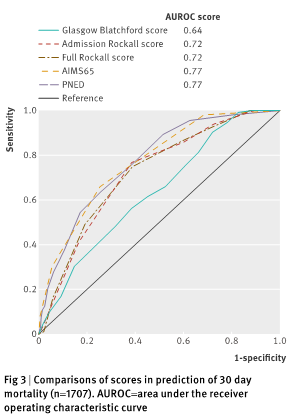 The first priority in the treatment of hemodynamically unstable UGIB should be providing adequate hemodynamic resuscitation with blood products and reversing coagulopathies (as needed). Early involvement of GI (+/- IR or surgery) should be considered. Excessive crystalloid administration should be avoided, and blood products should be given early on. Guidelines typically call for a MAP target of 60-65.

The best evidence guiding the transfusion threshold in UGIB is from a study out of Spain published in 2013 in the NEJM (12). It was an RCT of 921 patients with UGIB, comparing a liberal (Hgb<90 g/L) versus restrictive (Hgb<70 g/L) transfusion strategy in hemodynamically stable patients, in a highly controlled setting with high protocol adherence. They excluded patients with a history of ACS, PVD, or CVA. In the liberal group, 86% of patients were transfused, versus 49% in the restrictive group. The study found a mortality benefit for the restrictive group, with cirrhotic patients of Child-Pugh class A or B having the most benefit. The liberal (Hgb <90g/L) transfusion group also had increased rates of rebleeding, increased need for surgery, and increased length of stay. 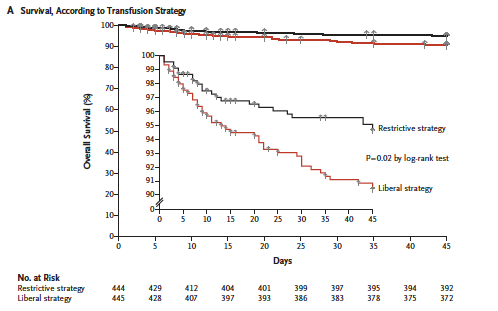 Blood products and Reversal of Anticoagulation

Keep in mind that if a patient is unstable and actively bleeding, blood products should be given regardless of the hemoglobin as this measure cannot be considered accurate in the setting of acute bleeding. Otherwise, consider transfusing at Hgb<70 (which is what the major GI guidelines suggest).

Guidelines around the reversal of anticoagulation in UGIB are less clear and are generally based on expert recommendations. For patients on warfarin with life-threatening bleeding, vitamin K 10mg IV and Octaplex should be given. For less severe bleeds, vitamin K IV may suffice, and in minor bleeds, discontinuing the medication or giving PO vitamin K may be sufficient. For patients with severe bleeding on DOAC’s, reversal agents are available (please see Dr. Michael Ho’s previous Grand Rounds post on this topic for further information). Consider using Praxbind for patients on Dabigatran with severe UGIB. A newer agent, Andexanet Alfa, is available for the reversal of Rivaroxaban and Apixaban, but it is very expensive. Octaplex can also be used to reverse these anticoagulants and is much cheaper.

If a massive transfusion protocol is ongoing, transfuse in a balanced 1:1:1 ratio. In a non-massive transfusion, platelets should be given with active bleeding and a platelet level <50 (13). There is no evidence to support the use of recombinant Factor VIIa in UGIB patients, with or without liver disease (14).

The current evidence regarding tranexamic acid (TXA) use in UGIB is poor, as most of the trials were conducted before the widespread use of therapeutic endoscopy. A systematic review (15), which included mostly studies from the pre-endoscopic time period, showed significant mortality reduction with TXA use. Consider giving TXA to all patients with severe or life-threatening bleeding and cirrhotics with low fibrinogen. We are still waiting for good evidence regarding the use of TXA in UGIB, but a large trial is currently ongoing looking at this issue.

Blakemore tubes have been shown to temporarily stop life-threatening bleeding in 80% of patients with acute UGIB from esophageal varices (16). However, their use comes with a high rate (14%) of serious complications such as airway obstruction and esophageal rupture (17). They should be used only as a last resort in variceal bleeding and should be a bridge to definitive treatment.

PPIs are the main medication for the treatment of non-variceal UGIB. But controversy exists regarding their utility in the ED and the route of administration. Most guidelines recommend starting with a high dose IV bolus followed by an infusion until EGD can be arranged.

How should we be approaching PPI use in the ED?

A meta-analysis of 6 RCT’s (18) looking at PPIs initiated prior to endoscopy in patients with unselected UGIB found that PPI did not result in significant differences in the clinically relevant outcomes of mortality, rebleeding, or need for surgery/transfusion; though, they did reduce the stigmata of recent hemorrhage seen on EGD and the need for endoscopic intervention.

Other meta-analyses in patients with endoscopically proven PUD have shown no differences in mortality comparing PPIs to H2RAs or placebo (19) and comparing high dose IV to low dose PPI regimens (20). In these meta-analyses, wide confidence intervals were seen, so it is hard to know the true benefit or harm. So, if you as an Emergency Physician feel strongly about continuing your usual practice with these medications, it is understandable. The recent ACG guidelines (5) reflect this; though, the NICE guidelines from the UK suggest not to offer PPI’s to non-variceal UGIB patients before endoscopy (13).

I would interpret this mess in a few ways. First of all, PPIs are of low priority during the resuscitation of a severe bleed. They do not reduce mortality and may even be appropriate to withhold in mild-moderate bleeds. Oral BID dosing is likely appropriate for most patients. Consider reserving expensive IV PPIs for select patients (i.e., those unable to tolerate PO). At the Ottawa Hospital, the GI department still wants ED physicians to give an IV PPI bolus followed by infusion for patients we think will need to be admitted for EGD. They do admit that this is only to facilitate their endoscopy and not because of a mortality benefit.

Variceal bleeding is an uncommon cause of UGIB, but the most likely cause to result in significant morbidity and mortality. The first priority in the treatment of variceal bleeds should be hemodynamic support with blood products. The administration of prophylactic antibiotics should be considered standard practice in all patients with cirrhosis and UGIB. Arguably, antibiotics should be the highest priority medication as a meta-analysis demonstrates reduced mortality, infections, and rebleeding when compared to placebo or no treatment (21). Ceftriaxone has been shown to be superior to PO Norfloxacin in preventing infections in advanced cirrhotics (22), so this antibiotic is most commonly chosen. In comparison to both PPIs and Octreotide, which do not have a mortality benefit in UGIB, prophylactic antibiotics in variceal UGIB have a NNT of 22 for preventing death and a NNT of 4 for preventing infection.

Another commonly used medication in variceal bleeding is Octreotide, which is a Somatostatin analog that decreases portal/splanchnic pressures. It has been shown in a meta-analysis to significantly reduce rebleeding and the number of units of blood transfused (23, 24), though no reduction in mortality was seen. It should be a low-moderate priority in the resuscitation of variceal UGIB and there is little evidence to support its use in undifferentiated UGIB patients.

Consider giving IV PPI bolus + infusion and IV TXA in significant variceal bleeds if there are IV lines available. Fibrinogen should be replaced if it is low (<1.0). Giving FFP to these patients (which guidelines often suggest for INR>1.5 or fibrinogen <1.0) should be done with caution as these patients often have normal clotting tendencies despite elevations in INR. Tense ascites increases portal and variceal pressures; therefore, consider small volume (<5L) paracentesis for these patients.

Endoscopy has been shown to reduce mortality, the need for surgery, and rebleeding, but the optimal time to endoscopy is still debated (25). Early endoscopy is variably defined in the literature between 6-24 hours from presentation. Unstable patients are poorly represented in the literature and unfortunately, are the ones requiring truly urgent endoscopy in the ED physician’s perspective.

It is hard to know exactly which subset of patients would benefit from immediate endoscopy, such as within the first 3 to 6 hours of presentation. The patients likely to benefit are those that fail to stabilize despite maximal resuscitative efforts. These patients should be referred quickly to our GI colleagues even if in the middle of the night. 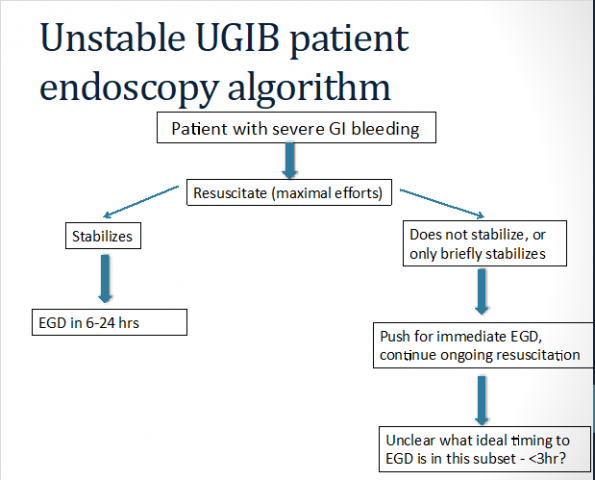 Patients who can be discharged from the ED without early EGD should be hemodynamically stable, have no ongoing bleeding, be reliable to follow-up if bleeding resumes, and have a low GBS or AIMS65 score. As discussed earlier, patients with a GBS of 0-1 can be safely triaged to outpatient management and discharged from the ED. They should be put on an oral PPI until assessed by GI in the outpatient setting. These scores can be used to help justify our decisions to discharge these patients we likely already identified as low-risk.