Are We Ready for ECMO on the Ground Floor? 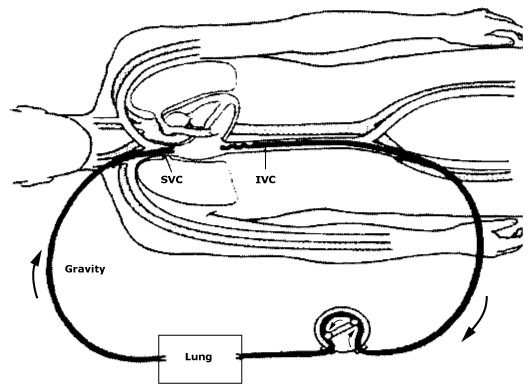 Extra Corporeal Membrane Oxygenation (ECMO) has significantly progressed over the past decades. It has become an invaluable tool in the care of adults with severe cardiac and pulmonary disease refractory to conventional management. The implementation of ECMO has even been brought downstairs to the Emergency Department (ED) for select patient presentations in a few countries worldwide, but currently there is only one ED ECMO program in Canada.

We present this post in a 2-part series. In part 1, review the basics of ECMO, as well as a deep dive into the ECMO literature covering the use in specific presentations. In part 2, we will review the factors involved in implementing an ED ECMO program and what the future holds for ED ECMO at the Ottawa Hospital.

In the simplest form of ECMO, blood is drained from the vascular system, circulated outside the body via a mechanical pump, where it is oxygenated, CO2 removed, and warmed up, before being re-infused back into the bodies circulation.

When ECMO is incorporated into cardiopulmonary resuscitation it is called ECMO-CPR (E-CPR). 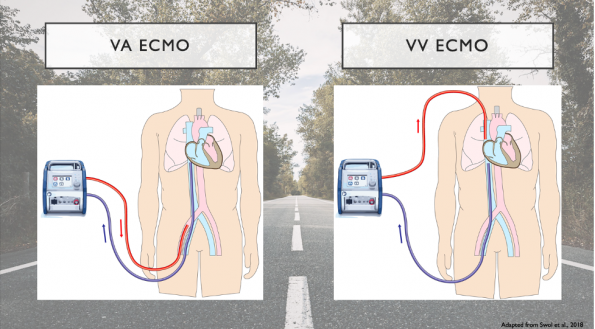 There are two main types of ECMO, which are differentiated by the location of insertion and type of cannulae used:

These are highly dependent on the organ we are trying to support.

Like with many other medical therapies, there are absolute and relative contraindications to the use of ECMO. These are summarized in the table below: 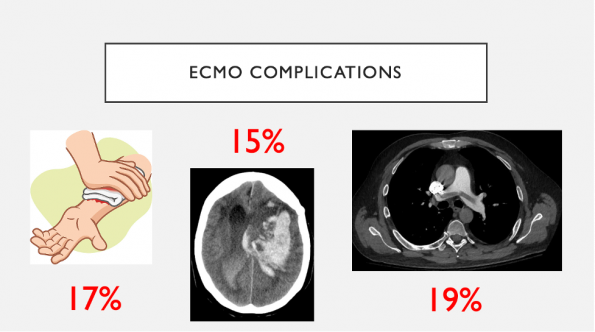 ECMO is not free of complications:

Given that ECMO is not a benign intervention, let’s examine the evidence for its use.

Evidence for ECMO Use

In this section, we will be looking at the evidence for the use of ECMO in specific situations: Acute Respiratory Distress Syndrome (ARDS), COVID-19, Hypothermic Arrest and Out-Of-Hospital Cardiac Arrest (OHCA). 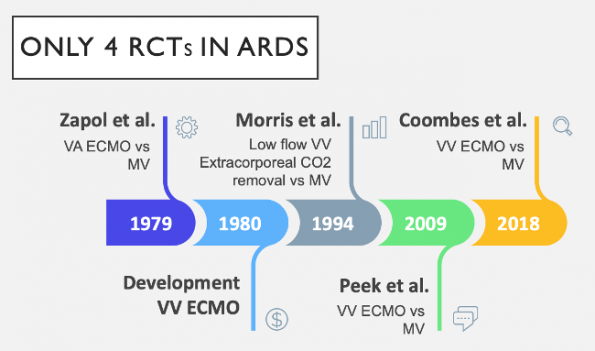 The benefit of ECMO in severe ARDS has long been debated. Because of highly challenging design and conduct issues, there have only been 4 RCTs performed over the past 50 years. To complicate the situation further, there have been advances in the fields ECMO circuits and mechanical ventilation (MV) engineering, as well as ICU care. These factors have led to conflicting overall evidence.

As neither the CESAR nor the EOLIA trials were adequately powered to detect a reasonable survival difference between groups, Coombes and colleagues meta-analyzed individual data from these two trials. Their primary outcome was 90-day mortality.

Expert Opinion: “All ARDS patients should get a good trial of lung protective ventilation, proning, and inhaled nitric oxide or Flonan before they are truly considered for ECMO” – Dr. Ariel Hendin, MD FRCPC (Emergency and Critical Care Medicine, The Ottawa Hospital, University of Ottawa)

What are we doing for ARDS in Ottawa? 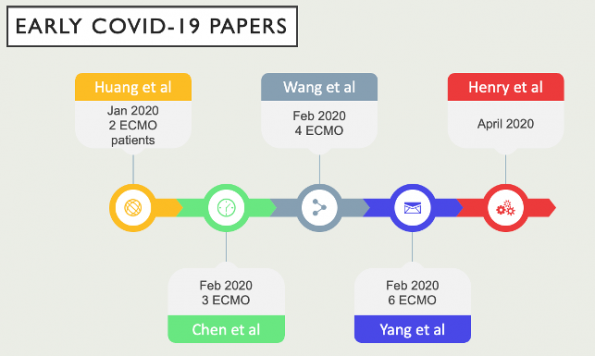 Since January 2020, many have extrapolated the use of ECMO to COVID-19 based upon previous experience with H1N1 and MERS. There have been multiple single center case reports and case series that have looked at the survival benefit of implementing ECMO. However, the overall data is sparse and of very low quality.

The WHO in May 2020, made the recommendation to ECMO should only be provided to patients with COVID-19 who remain in refractory hypoxemia despite our typical treatments and only in centres that have experience, staff and resources.

What is Ottawa’s Local Practice?

A core body temperature below 32℃ increases the likelihood of cardiac arrest – a common outcome with accidental hypothermia. VA-EVMO has now become a viable option for patients with severe hypothermia presenting in cardiac arrest:

Owing to the nature of accidental hypothermia there are no RCTs on this topic. Data on ECMO use in hypothermic arrest comes from single center observational studies, case reports and case series. 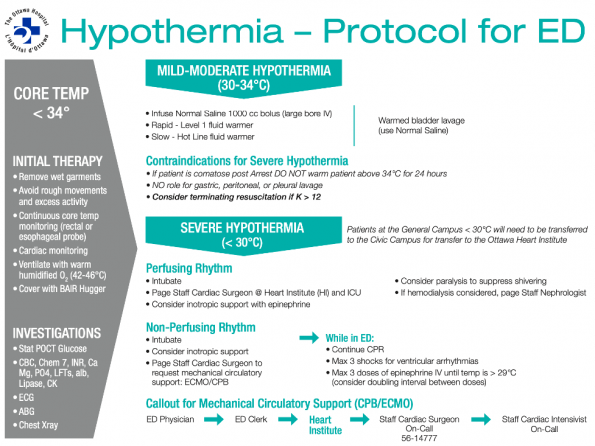 This is the most up-to-date hypothermia protocol at The Ottawa Hospital. It further echoes the recommendation to consider ECMO in cases of severe refractory hypothermia.

We know that patients who suffer out-of-hospital cardiac arrest often do not respond to standard CPR and their mortality rates are almost 90%. There is growing interest in research on the use of ECPR in the management of refractory cardiac arrest. Like all other topics of ECMO, the evidence of ECPR is quite controversial.

An initial systematic review performed by ILCOR (Holmberg et al., 2018) found the results from individual studies to be very inconsistent; that all studies lacked a pre-registered protocol and had variable inclusion criteria; risk of bias to be critical; and the body of evidence to be low. 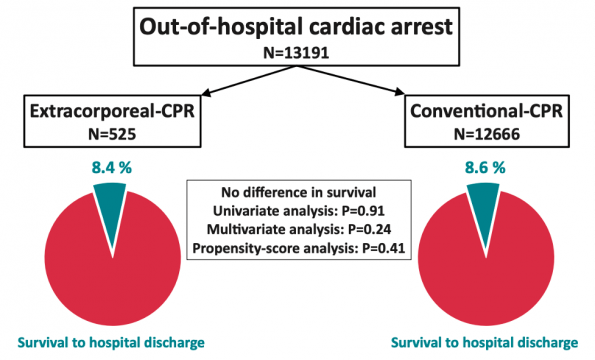 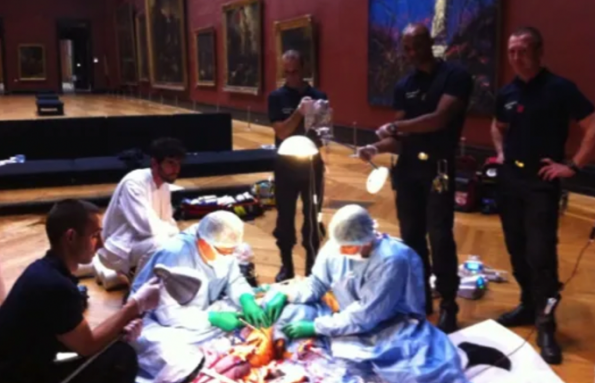 ECMO initiation in the Louvre 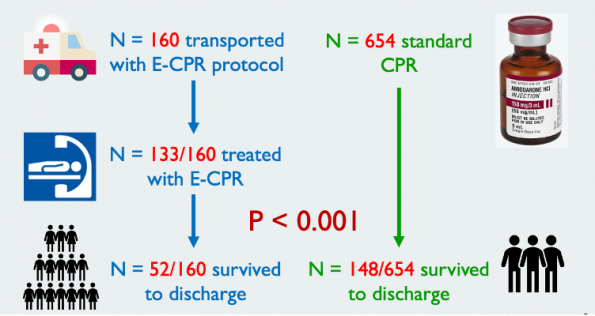 Then this led to the first and only RCT in OHCA which was recently published in the Lancet by Yannopoulous and colleagues.

This was a phase 2, single center, open label, pragmatic RCT that aimed to compare survival to hospital discharge comparing ED standard ACLS resuscitation versus ECMO facilitated resuscitation. Of note, this study employed Bayesian statistics in that they used previous data to develop a probability of hospital discharge. 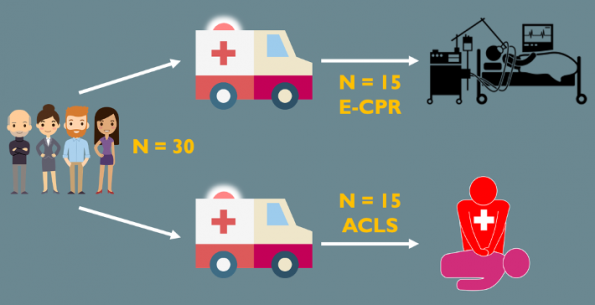 The Extracorporeal Cardiopulmonary Resuscitation for Refractory Out-Of-Hospital Cardiac Arrest (EROCA) pilot RCT aimed to assess the feasibly of hitting critical time periods from OHCA to ED arrival and from ED arrival to initiation of ECMO.

Expert Opinion:  “The findings of the ARREST trial are highly compelling and echo with identical numbers other prominent papers [CHEER trial] that have been published in the western world with very well developed ECMO systems and protocols…an RCT on ECPR in OHCA is needed…until then, I would advocate for the use of ECPR on the right patient” – Dr. George Mastoras, MD FRCPC (Emergency Medicine, University Health Network, University of Toronto)

Expert Opinion: “Many places will try and replicate the findings from the ARREST trial but will all fail as there are numerous limiting factors such as having a well-developed EMS system and ECMO protocols and funding…” – Dr. Sheldon Cheskes, MD CCFP-EM (Emergency Medicine, Sunnybrook Health Sciences Center, University of Toronto)

What is Our Local Practice?

In this section, we will discuss the factors that are needed to implement an ED ECMO program and what happens when a code ECPR is called at St. Paul’s hospital in Vancouver which is currently the only ED ECMO center in Canada.

Expert Opinion:There are many necessary components to a successful ED ECMO program. There needs to be a very well-developed pre-hospital system with strict inclusion and exclusion criteria that paramedics can apply. There also needs to be a number of staff who able to provide ECMO. ECMO provides also need proficiency and expertise. – Dr. Brian Grunau, MD MHSc (Emergency Medicine, St. Paul’s Hospital, University of British Columbia)

Development of a Pre-Hospital System

What happens when a “Code ECPR” is called at St. Paul’s Hospital? 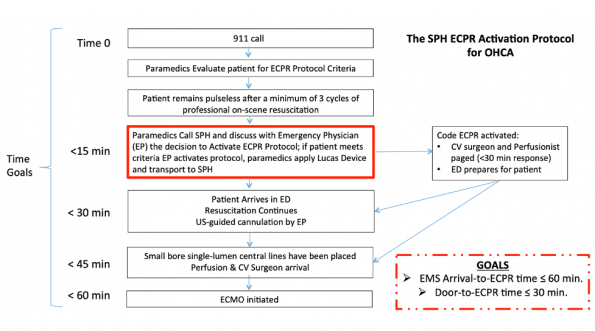 Above is a timeline of the events that occur when a 911 call is received to ECMO initiation at St. Paul’s Hospital in Vancouver. There are two overall time goals:

Time 0 here is when the 911 call comes in as it provides the best estimate of the time of cardiac arrest. Paramedics will then see if the patient meets specific inclusion criteria (shown below), while continuing on scene resuscitation. 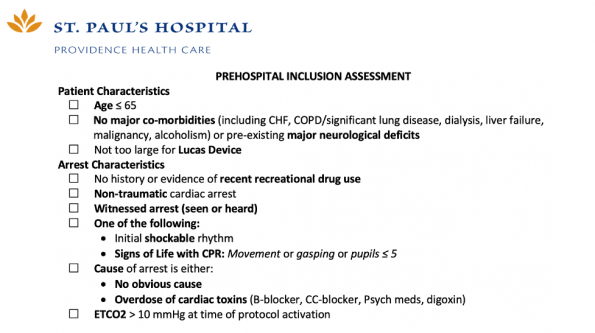 If paramedics deem that the patient meets inclusion criteria, they then call into St. Paul’s to discuss the case with the Emergency Physician (EP).

If the EP is in agreement that the patient meets criteria for ECPR, a code ECPR is called:

On patient arrival, the patient is then rapidly screened again for additional ECPR inclusion.

Expert Opinion: “In order for an ECPR program to be successful like the Yannopoulous program in Minnesota, the program has to be extremely mature and developed in all realms from prehospital care to ED and Cath lab care to ICU care…Only once these are established and we have our reps in critical care experience can we be proficient at ECPR and navigate issues as they arise…once these fundamental aspects are solid, we may be able to replicate the results from the ARREST trial and that ECPR may be the future of cardiac arrest care…” – Dr. George Mastoras, MD FRCPC (Emergency Medicine, University Health Network, University of Toronto)

This brings us to the last section of this blog post. Here, we are going to take a look at what ED ECMO might look like at TOH. 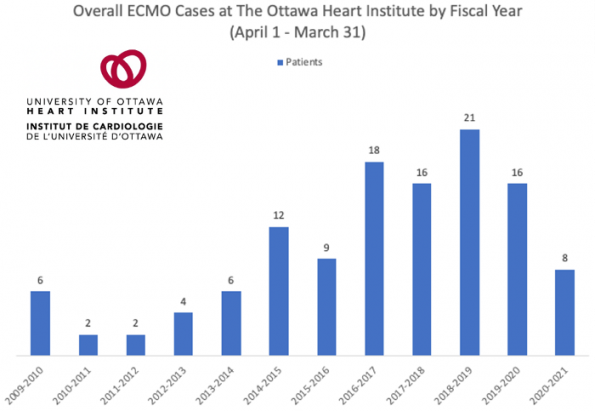 Over the last decade, there has been approximately 114 cases of ECMO. The breakdown of the underlying disease process in these cases is unclear. However, there has been a gradual increase in the number of cases yearly. Even then in Ottawa we currently do not have the ECMO volume compared to other major centers in Canada. 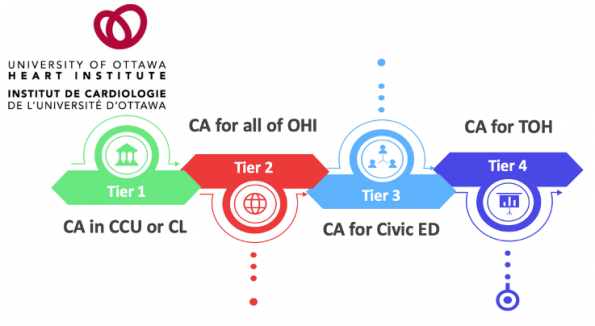 In Ottawa, we are working towards developing this maturity and experience. The Ottawa Heart Institute (OHI) led by Dr. Brock Wilson, currently has a tiered roll out system for ECPR.

Having a roll out like this, will allow us to increase our experience with ECPR, establish expertise and to establish a solid ECPR protocol.

Moreover, there is discussion between a member of the ED Resuscitation Committee about turning the Civic ED into the Cardiac arrest center. Should this occur, we would potentially take all cardiac arrests including those with non-shockable rhythms. To develop this would require a protocol for an EMS bypass to the Civic ED. Once this happens our volumes would increase, and this may give us the necessary exposure we need.

Overall, it will be years until we obtain the necessary volume, exposure, and development of strong prehospital and ECMO protocols for ECPR. We should not expect to see ECPR program landing in an Ontario ED anytime soon.

Expert Opinion: Both Dr. Christian Vaillancourt, an emergency physician and cardiac arrest researcher in Ottawa and Dr. Sheldon Cheskes, believes that it may be higher yield to focus on the fundamentals in improving cardiac arrest survival compared to developing an ED ECMO program. These would include improving rates of bystander CPR, improving rates of bystander AED use, and measuring CPR quality. Both are adamant that all these measures would improve survival far greater than any ECMO program would, assuming it would first be successful. Additionally, the cost of an ECMO program would far exceed community education measures.