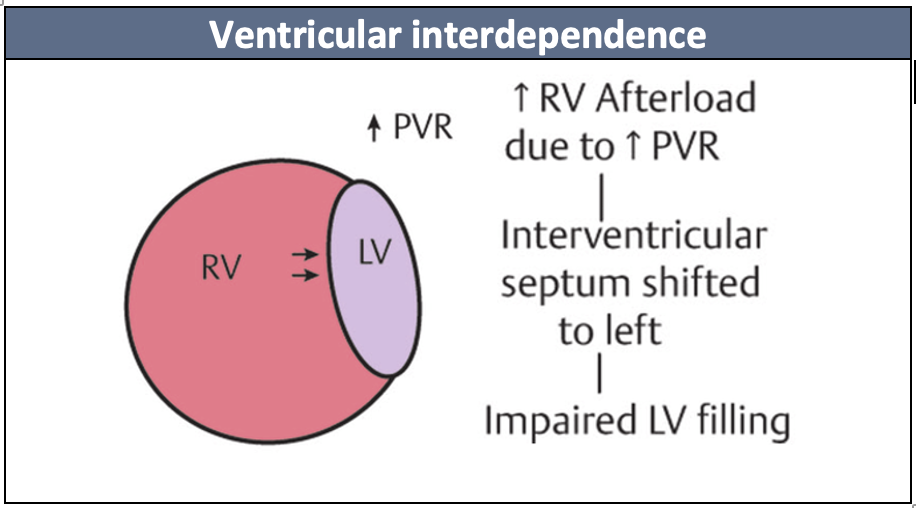 Cardiogenic shock (CS) is considered the most severe form of acute heart failure. It is an important and often under-recognized clinical entity in the emergency department (ED). The difficulty in diagnosis lies in its diverse presentations, overlap with other shock states, and varied hemodynamic patient presentations. This summary provides a high-yield clinical primer for identification, diagnosis, and initial management of CS.

Cardiogenic shock comprises approximately 15% of cases in patients presenting to the ED with shock. In-hospital mortality varies between 40-60%, with nearly half of in-hospital deaths occurring within the first 24 hours of presentation. Despite advancements in STEMI bypass systems, revascularization therapies, and mechanical circulatory support (MCS), the mortality rate for CS remains high. For emergency physicians, early recognition and intervention improves survival.

The majority of cardiogenic shock is due to underlying acute coronary syndrome (ACS). However, its contribution has declined over the past two decades with a parallel increase of other non-ACS etiologies. A large North American CCU dataset in 2019 showed that only 1/3 of CS was related to ACS, while the remainder included causes such as cardiomyopathies, valvular diseases, and arrhythmias. The main causes of cardiogenic shock can be broken down into ACS vs. non-ACS etiologies. 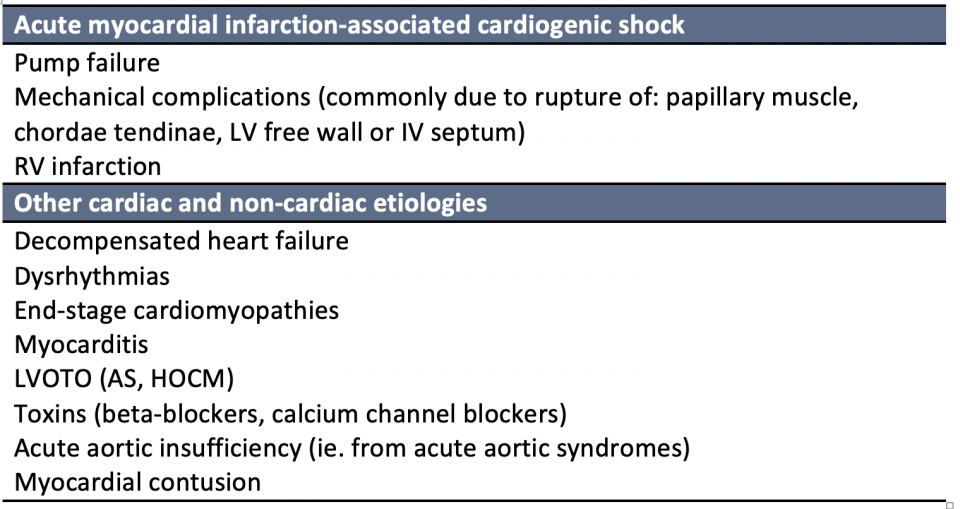 Cardiogenic shock encompasses a broader spectrum of clinical and hemodynamic presentations beyond the classic “cold and wet” construct. The SCAI classification provides a framework for describing various CS phenotypes and is a more accurate reflection of the cardiogenic shock spectrum. This classification system allows easy applicability at the bedside with the goal of facilitating communication between providers and streamlining clinical decision-making. It has been endorsed by many critical care and cardiology societies. It has also been validated across many clinical settings and has prognostic discriminatory potential.

Figure 1 | Hemodynamic changes in compensatory and maladaptive responses to CS.

In the spectrum of cardiogenic shock, we initially see a compensatory rise in HR and SVR followed by changes in microcirculation due to a progressive inflammatory response, ultimately leading to a paradoxical decrease in SVR and vasodilation. 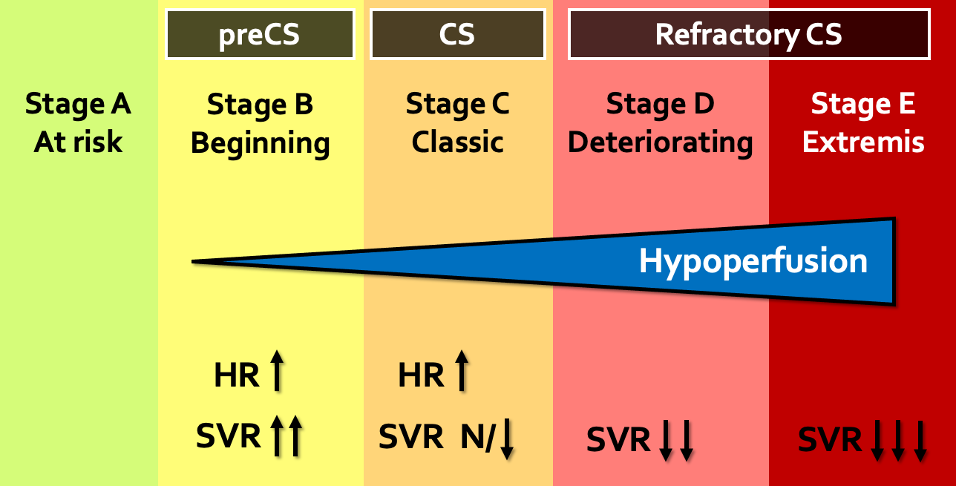 Various definitions for CS exist in the literature, predominantly used to standardize patient recruitment in studies. While there is a lack of uniform definition, many common features exist amongst trials and guidelines:

Therefore, it is important to use a combination of vitals, POCUS, and physical exam findings looking for hypoperfusion and congestion as well as lab markers to aid in your diagnosis of CS.

Hypotension: commonly seen in CS, however a subset of patients do not have hypotension but rather signs of hypoperfusion.

Compensatory tachycardia: may be seen as an early response to decreased SV. This compensation is also why we cannot rely solely on BP to evaluate for CS.

Hypoperfusion: may indicate occult CS. Common features of hypoperfusion in CS include:

Lactate ≥ 2: higher lactate level has a poorer prognosis in CS (in contrast to septic shock where lactate elevation does not necessarily correlate to severity of illness or prognosis). In four observational studies, elevated lactate > 2mmol/L was associated with increased mortality (OR ranging 1.4-6.7).

Hepatic injury (elevated ALT, AST): commonly seen in CS due to combination of hypoperfusion and venous congestion. In the 2017 CardShock registry study, approximately 60% patients with CS had elevated ALT. In a subanalysis of the IABP-SHOCK II trial, patients with elevated ALT and AST had a 68% 30-day mortality rate.

PoCUS remains an indispensable tool in the assessment of CS. Its primary use lies in the evaluation of cardiac dysfunction. The following questions are helpful in the diagnosis of Cardiogenic Shock: (For more on the image generation of cardiac ultrasound, see our cardiac echo guide, and achieving requirements). 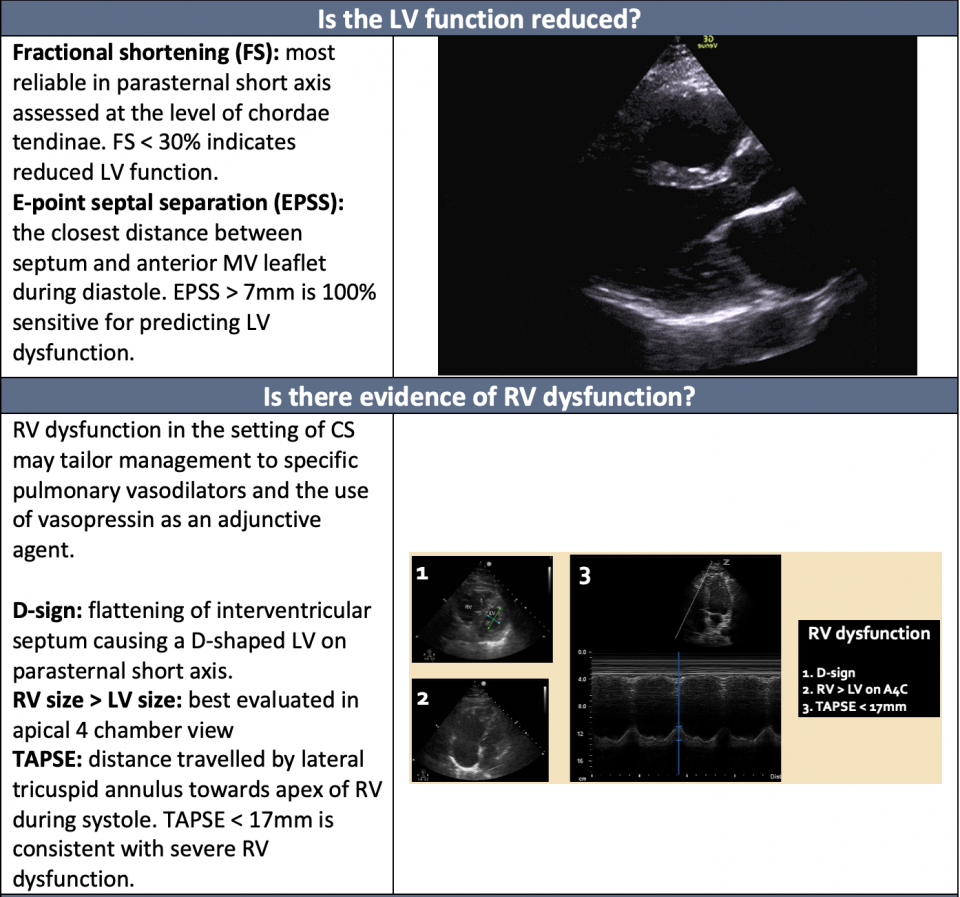 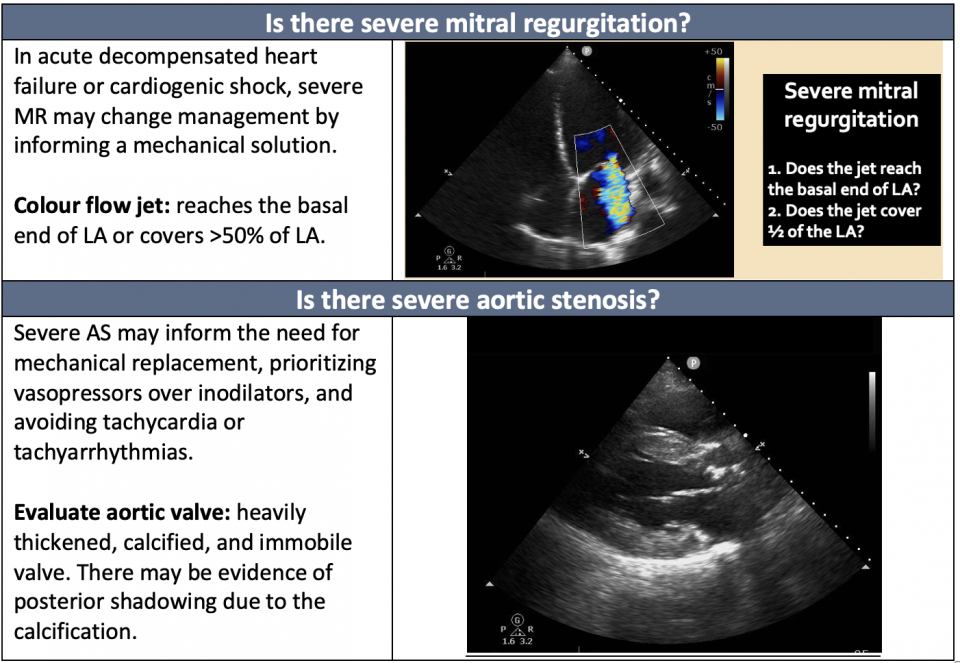 Initial circulatory support in CS involves an understanding of coronary perfusion pressure (CPP). The CPP can be estimated by the equation: dBP – LVEDP. The coronary arteries supplying the LV are almost entirely perfused during diastole because they are not compressed as they are in systole. During this state, the only countering pressure is the LV end-diastolic pressure. Therapies to optimize CPP should focus on those that improve MAP or SVR (indirectly dBP) and agents that decrease preload or filling pressures (indirectly LVEDP). 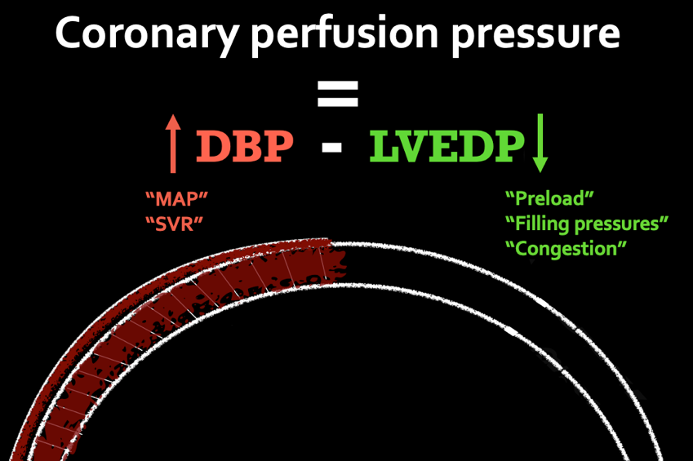 The first line vasoactive agent for initial circulatory support of CS is norepinephrine. It is universally endorsed by the Canadian Cardiovascular Society, American College of Cardiology and European Society of Cardiology as the first line agent for patients in CS. This is based on the available evidence that norepinephrine performs better in head-to-head trials than other vasoactive agents such as dopamine, vasopressin, and epinephrine. One of the earlier trials to demonstrate this was the SOAP II trial, which included 1679 patients in various types of shock. In the subgroup analysis of patients in cardiogenic shock, dopamine compared with norepinephrine was associated with increased rate of death at 28 days.

Norepinephrine increases SVR and has minimal effect on heart rate. Its beta-1 activity helps with inotropy that is needed in these patients. It has the added benefit of counteracting vasodilatory effects of inotropes, should they be needed in the ED.

A vasoactive agent that is often used as an adjunct in CS is vasopressin. Its effect on vascular smooth muscle causes systemic vasoconstriction and increases SVR. However, in the lungs it causes vasodilation through a NO-dependent mechanism. The patients to consider vasopressin are those who have underlying pulmonary hypertension, evidence of RV dysfunction or evidence of biventricular dysfunction as unloading the RV improves LV filling due to ventricular interdependence.

Recent evidence has shown that its use should be avoided in patients with CS, especially those secondary to acute MI.

The reasons for increased observed mortality may be attributed to worsening myocardial ischemia and demand against an already limited supply. The use of epinephrine also tends to promote more tachycardia and ventricular dysrhythmias that can cause further cardiac decompensation.

Both American and European cardiology societies recommend that inotropic support should only be used if necessary, giving both agents a Class II indication. There is some evidence that the use of inotropes may be associated with increased mortality in patients with CS. Therefore, an inotrope should only be used if there are ongoing signs of hypoperfusion and only after starting norepinephrine. In a systematic review and meta-analysis of 11 studies, there was no observed difference in the primary outcome of mortality between dobutamine and milrinone.

Dobutamine exerts its positive inotropic effect by acting on the beta-1 adrenergic receptor of myocytes. The benefits of dobutamine in the ED include rapid titratability and dosing familiarity. The drawbacks are that it can be arrhythmogenic, worsen tachycardia and cause hypotension if SVR is not appropriately augmented. In patients receiving chronic beta-blockade, its effect can be suboptimal in a phenomenon known as tachyphylaxis.

Practically, dobutamine is preferred in the ED due to its titratability. If dysrhythmias or hypotension is observed post initiation, it can be quickly turned off.

Milrinone works independent of the beta-receptor as it is a PDE inhibitor and can help augment CO, especially in patients treated with chronic beta-blockers. It has the added benefit of unloading the RV due to its effects on decreasing PVR. Its limitations are such that it is less titratable and can cause more vasodilation than dobutamine. It is also renally cleared which may cause overaccumulation in patients who have concomitant AKI or renal failure.

The benefit of IV diuretics is often underrecognized and this therapy is sometimes deprioritized in CS. Furosemide has a ceiling effect and the IV formulation tends to have a much higher peak concentration than the PO dose. A mechanism that is often forgotten is that it can act as venodilator due to its effects on the RAAS system and vascular prostaglandin synthesis, ultimately leading to improved congestion and filling pressures. Common doses that cardiology recommends are 120 mg IV for the diuretic resistant and 60mg IV for the diuretic naïve patient.

In CS, stroke volume decreases mainly due to an acute insult (in the setting of MI) or due to LV decompensation from other cardiac and non-cardiac etiologies as discussed above. HR increases to compensate for the instability and maintain CO. It is important to recognize and be comfortable with this compensatory tachycardia as this may be important to maintain forward flow. Treating the underlying cause (ie. decompensated heart failure) will help treat the tachycardia itself. 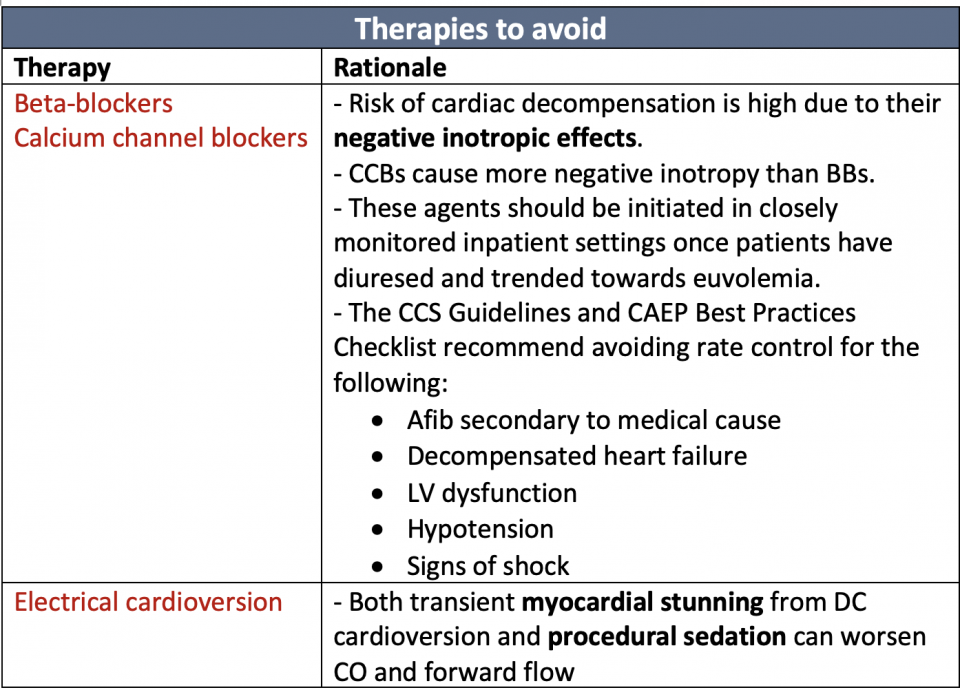 Electrical cardioversion may be considered for the following:

The role of digoxin in the management of atrial fibrillation and HF has been challenged recently, and its prominence in consensus guidelines has minimized. This is in part due to the publication of the DIG trial which showed no mortality benefit from digoxin in HF patients with sinus rhythm. However, digoxin remains an important treatment option for patients with rapid atrial fibrillation and decompensated heart failure.

The association between digoxin use and increased mortality in meta-analyses is inconclusive and the higher mortality in AF patients in observational studies is likely due to residual confounding. There seems to be a signal that digoxin may be beneficial for rate control in patients with atrial fibrillation and reduced LVEF. However, it should be noted that this evidence comes from retrospective analyses and observational data, not RCTs.

IV digoxin loading can achieve rate control as early as 1 hour. For patients with AKI or chronic kidney disease, digoxin can still be used with the caveat that a lower dose is used. Toxicity with digoxin does not occur with loading but rather occurs during the maintenance phase. The following is a recommended loading regimen: 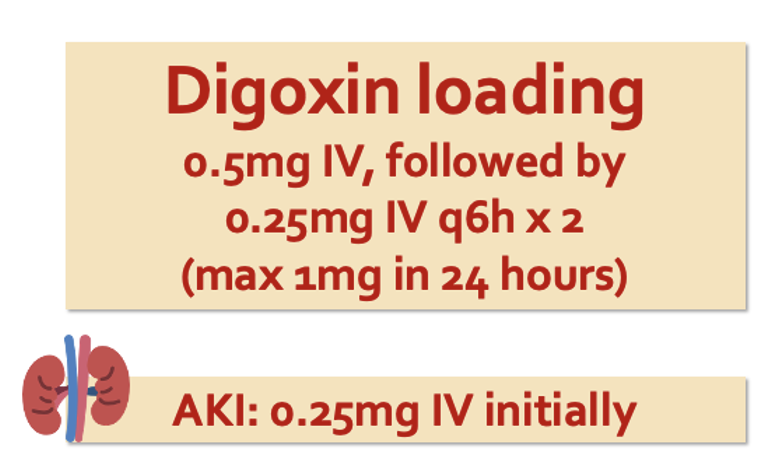 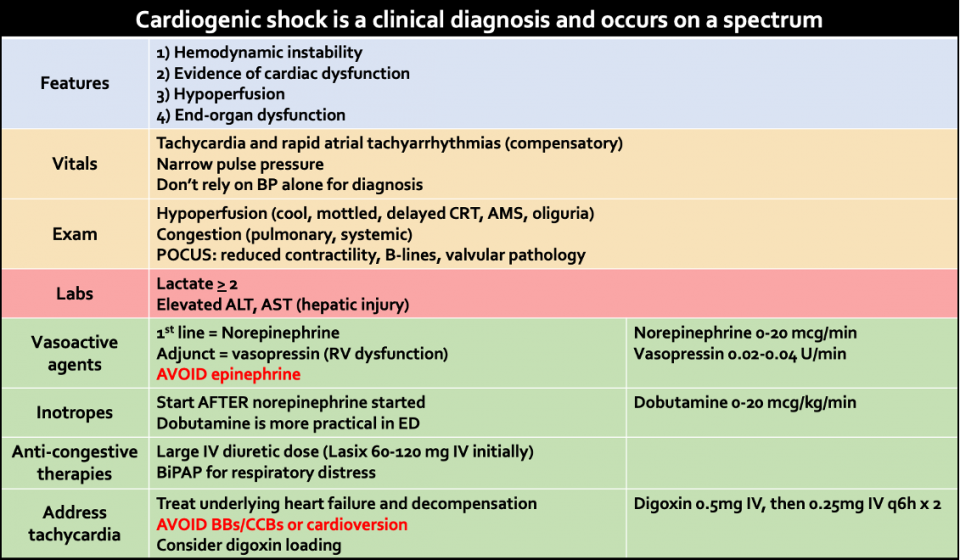