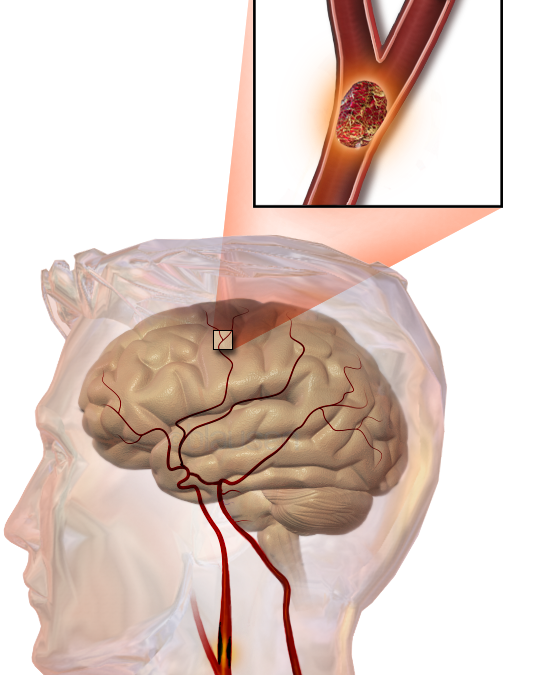 Acute stroke care is integrated into emergency medicine in many emergency departments across Canada. Whether you are involved in acute stroke care through consultation with neurology or through tele-stroke, understanding the complications of acute stroke therapy and evidence around treatment options is essential. Specifically, in this blog post we will focus on the following:

The incidence of orolingual angioedema after Alteplase (tPA) administration in acute ischemic stroke is between 1.3-5.1%. 1–4. 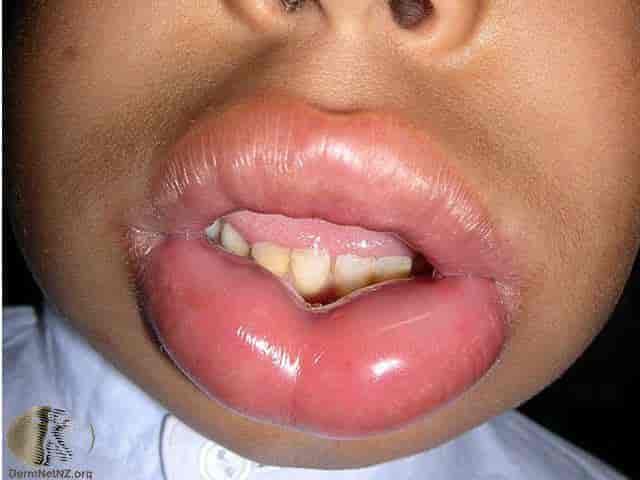 A meta-analysis by Yayan in 2013 looked at 19 manuscripts on orolingual angioedema after alteplase administration and found some key findings about this process: 5

How does this occur?

Alteplase is a fibrinolytic that activates plasminogen to plasmin which in turn cleaves thrombus-bound fibrin. The by-products of this reaction are bradykinin, activation of complement cascade and mast cell degranulation and histamine release. The proposed mechanism of orolingual angioedema after thrombolysis from acute ischemic stroke is thought to be due to the increased bradykinin. It’s these breakdown products that lead to the angioedema/anaphylactoid reaction and why the main proposed treatment is similar to that of anaphylaxis.

It is important that with any patient with new orolingual angioedema that you run through your differential. In the case of angioedema in acute ischemic stroke you can think of 3 major things:

What about Tenecteplase (TNK)? Given it is relatively new in the treatment for acute ischemic stroke in Canada there is little in the literature about orolingual angioedema apart from small retrospective studies. With this limited data we can see that in the context of acute ischemic stroke Tenecteplase does appear to have a similar rate of orolingual angioedema as Alteplase at a rate of approximately 2.4% 6.

The Canadian Stroke Best Practices guidelines were updated in 2022 to include post-tPA angio-edema7. They have a much less prescriptive approach than the 2018 AHA/ASA guidelines 8. From a practical standpoint, most of the evidence comes from case reports and retrospective studies, and there are few high-quality studies. Additionally, if you start looking into the medication suggestions you find yourself in a circular review of the same case reports citing other case reports and guidelines.

Given the lack of robust evidence management options are based on case reports and understanding the pathophysiology. We are trying to reduce the by-products of increased bradykinin, complement activation and mass cell degranulation and histamine release. From our understanding of this breakdown, it makes sense to treat with steroids, antihistamines, and H blockers.

The incidence of post-tPA intra-cranial hemorrhage (ICH) is between 2.4-6.4% 9 10. Current treatment of ICH after tPA administration in acute ischemic stroke is based on case reports and retrospective studies. Importantly, there are no RCTs. 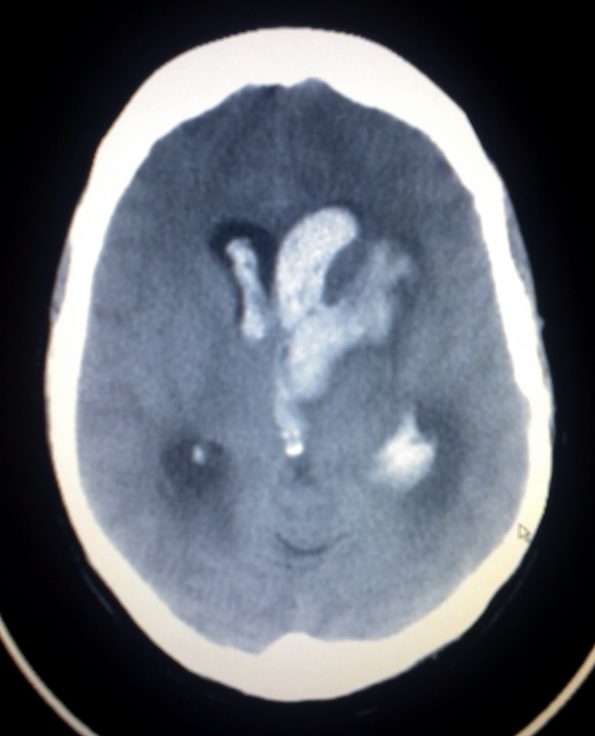 Highlighted risk factors for ICH after thrombolysis administration for acute ischemic stroke include:

ICH post tPA is rare and as such difficult to randomize for best approach to treatment. At present, evidence for treatment is based on opinion, case reports and observational cohort studies. Knowing this allows for us to make informed decisions that are most clinically relevant for our patients.

The Canadian Stroke Best guidelines summarize the lack of evidence with their suggested approach stating “there is insufficient evidence to support the routine use of cryoprecipitate, fresh frozen plasma, prothrombin complex concentrates, tranexamic acid, factor VIIa, or platelet transfusions for alteplase – associated bleeding [Evidence Level C]. Use of these medications should be decided on an individual case basis.” 7 In contrast, The AHA does make recommendations for the use of cryoprecipitate and TXA 8.

Click below for a deeper dive into the evidence behind these individual therapies, or skip ahead for the bottom line.

TXA mechanism of action involves inhibition of activation of plasminogen to plasmin acting as an anti-fibrinolytic. Given this is where tPA acts, this theoretically reverses ongoing tPA activity and acts as an “antidote” to tPA still on board. The half-life of alteplase is about 5 minutes with a terminal half-life of 72 minutes 11. In acute ischemic stroke it is given as a bolus and then an infusion over 60 minutes with the total dose of 0.9mg/kg. Essentially it is active for about 2-3 hours from the time the bolus is given.

TXA’s recommendation for use post tPA bleeding come from a case report 12 and is otherwise is extrapolated from trauma and ICH literature. There is also limited data on safety and efficacy in symptomatic ICH after tPA.

When we look at the trauma literature the effect of TXA in TBI shows a decreased rate of hemorrhage expansion with TXA 13. The evidence for TXA in spontaneous ICH the TICH-2 trial shows no functional outcome difference at 90 days but did show decreased hematoma expansion and 24 and 48 hours and no significant difference in severe adverse events. 14 The challenge here this evidence isn’t looking at hemorrhagic transformation. When we look at the secondary outcomes of these trials, we do see early administration leading to decreased hematoma expansion. TXA could be considered as both an antidote to TXA when still active and may decrease rate of hematoma expansion if given early.

Overall, it is reasonable to give TXA for post tPA bleeding based on mechanism of action in select patients who have early recognition of bleeding (especially <3 hours) in symptomatic ICH post tPA.

Cryoprecipitate contains clotting factors promoting cross-linked fibrin clot. The evidence for its use is based on case reports and retrospective studies. One of the most thorough reviews of the literature for use of cryoprecipitate was by Yaghi et al in 2015. They did a multicenter retrospective chart review between 2009 – 2014 and out of 3894 patients given tPA for ischemic stroke 128 (3.3%) had a symptomatic ICH. They found statistical significance showing that that severely low fibrinogen <1.5 was associated with hematoma expansion.

Platelet administration is controversial! The 2016 PATCH trial looked at if platelet transfusion with standard care for acute stroke due to spontaneous ICH and found the odds of death or dependence in the platelet group at 3 months were higher than in the standard of care group. At this stage this is a CAUTION and should be discussed with a stroke neurologist and possibly only helpful in the thrombocytopenic patient.

Lastly, for FFP, PCC and Factor VIIa the evidence here gets even more minute. You would only ever use PCC if the patient were on Warfarin, and you have given tPA as their INR was low but this is OPINION only. There is little biological rationale to give PCC or FFP.

At present there is no statistical difference of rates of ICH between TNK and tPA in acute ischemic stroke however there is a trend to less intracerebral hemorrhage with TNK. Cardiology literature shows us that in MI patients there is a reduced rate of non-cerebral bleeding complications. Overall, hold this space!

Who Should We Reverse and Treat?

TXA and cryoprecipitate are being used to stop hematoma expansion. They don’t reverse the blood that’s already there. If a patient has significant worsening deficits that caused you to look for bleed these medications won’t improve those deficits. These are the cases where a multi-disciplinary approach and understanding of a patients’ baseline and goals of care are extremely important. If in doubt, give the cryoprecipitate and TXA while concurrently involving all parties including neurology +/- neurosurgery +/- thrombosis +/-  ICU. They are likely to cause little harm and getting them on board early is important.

Seizure in the Stroke Patient

Seizures in acute ischemic stroke can be classified into:

Post stroke seizures have been shown to be associated with longer hospitalization and increased mortality therefore prevention and timely treatment are important.

Given this, it is important to know when to use abortive therapies and when to consider loading with an anti-epileptic drug (AED). At present there are no established guidelines suggesting prophylactic use of AED following acute ischemic stroke. Canadian Stroke Best Practice suggests prophylactic use of anticonvulsant medications in patients with ischemic stroke is NOT recommended [Evidence Level B]. Additionally, they suggest some evidence to suggest possible harm with negative effects on neurological recovery [Evidence Level B] 7.

One of the most common cause of seizures and epilepsy in older populations is secondary to stroke. Reported incidence of post stroke seizures for all comers varies between 5-15% depending on stroke etiology, severity, and location.

There is a relative absence of predictors for post stroke epilepsy but evidence suggests that cumulative incidence of epilepsy rises from 3.5% at one year to 12% at 10 years. Late onset seizures seem to be more highly related to epilepsy development than early (90% versus 35% from a study in 1990) but there is not a lot of data in this area.

Canadian stroke best practice guidelines agree with this and suggest benzodiazepines for immediate seizures. They suggest that a single, self-limiting seizure at onset, or within 24 hours should be considered “immediate” and not treated with long term AED. If recurrent or late onset (>24 hours from stroke) then treat as usual including AED 7.

A systematic review and meta-analysis by Wang and colleagues looked at incidence of early and late seizures after ischemic stroke and their pharmacologic treatment. This paper looked at 35 studies on incidence and only 6 reported specific AED and the studies were low to moderate quality. They found that no single AED was more effective than another, but that newer AED were associated with fewer side effects. 16.

Essentially if the patient has a recurrent seizure loading them is fine, especially if you’re worried. The combination of investigating and treating reversible causes and performing a CT head and the loading them will help neurology decide if they:

We know that newer agents have fewer side effects, such as Levetiracetam, but neurology can always be changed over to this if you choose to load with Phenytoin or whatever else your ED has on hand!